Schools closed for a day in 5 districts as Antalya faces risk of severe storm, tornado 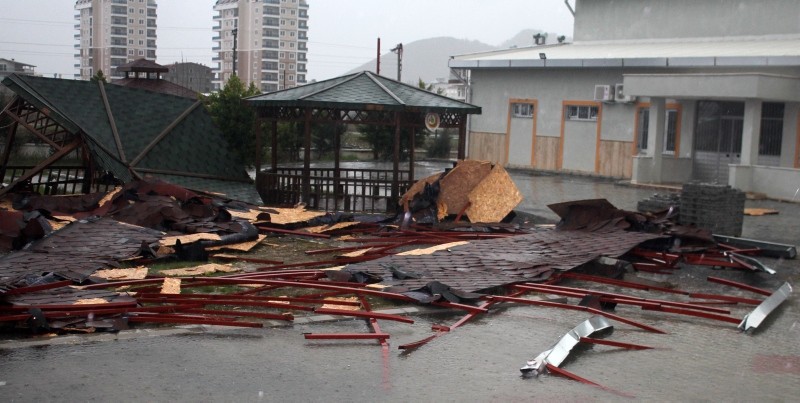 After severe winds and heavy rain, the roof of a 10-story building flew off and landed on school grounds in the Gaziosmanpau015fa district of Antalya last week. (DHA Photo)
by Daily Sabah Feb 05, 2019 10:10 pm

The Governor of Antalya Münir Karaloğlu said schools in the districts of Kemer, Kumluca, Finike, Demre and Kaş will be closed on Wednesday, Feb. 6 as the southern coast faces a risk for severe weather, just over a week after tornadoes battered the city.

A powerful storm as well as a possible tornado is expected to affect a large swath of southwest Antalya, the governor said Tuesday evening, announcing on social media that all schools in the five districts will be closed for a day as precaution.

Karaloğlu said that within the scope of the warning issued by the Meteorology Directorate of Region IV, the governor's office declared holiday for a day in all public and private schools in the districts of Kemer, Kumluca, Finike, Demre and Kaş as the storm is expected to bring winds of speeds above 100 kilometers per hour and create a risk of tornadoes.

Antalya has been in recovery since heavy rain and rare tornadoes wreaked havoc in the Kumluca, Kemer and Finike districts of the southern resort city in late January. The damage following the out of the ordinary weather for the tourist region caused approximately TL 100 million in material damage. A 13-year-old girl and a 40-year-old man, who were hit by parts of a roof the tornado ripped apart, were among the victims of the disaster, while some 15 others were injured.

Tornadoes, which most commonly occur in the United States, are a rare weather event in Turkey and less intense. They are mostly sighted at sea, off the country's Mediterranean shores. Authorities warned the public to stay indoors in a basement or lower floors during tornadoes and cut off power and water supplies, and if they are driving, leave the car and shelter in the nearest building or in a ditch if there are no buildings around.