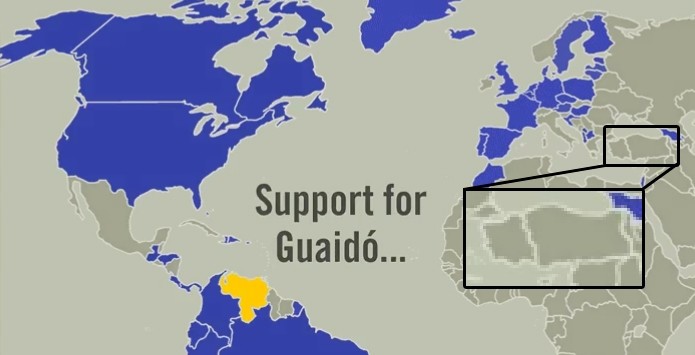 U.S. Secretary of State Mike Pompeo received scathing criticism from Turkish Twitter users after he shared an image that showed Turkey divided with a border running through the middle of the country.

Pompeo on Tuesday thanked European countries that recognized self-declared Juan Guaido as interim president of Venezuela with a Twitter post and shared an animated graphic showing the nations which recognized Guaido.

But perceptive Turkish users quickly noticed that Turkey's borders on the image were drawn incorrectly, as if the country was divided in two.

Several users pointed out to Pompeo his mistake, sharing images showing Turkey's correct borders, while others called it a conspiracy theory aimed at dividing Turkey.

Guaido declared himself Venezuela's interim president on Jan. 23, calling elected President Nicolas Maduro's leadership illegimate. Guaido has the support of the U.S., Canada and most European and South American nations. Turkey, Russia, China, Iran, Cuba, Bolivia and Nicaragua, along with other countries, have stood by President Maduro, opposing the undemocratic intervention.