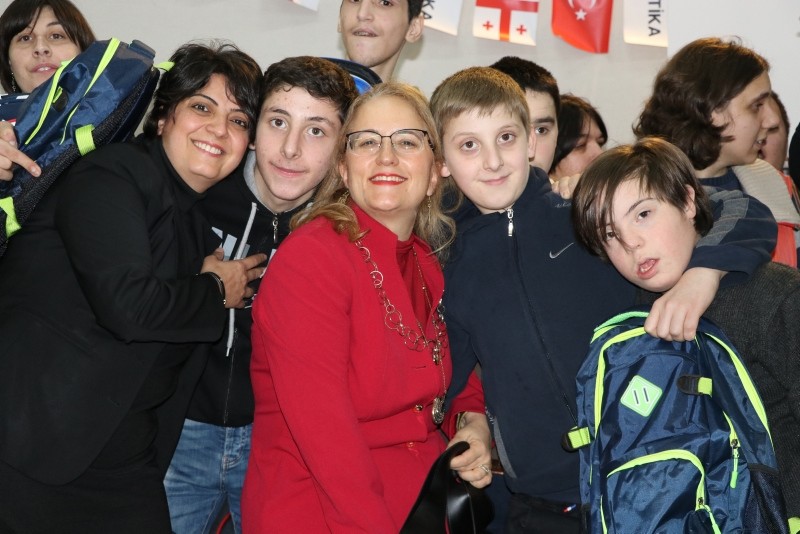 Turkish ambassador to Tbilisi Fatma Ceren Yazgan (center) poses with the children and officials at AISI. (AA Photo)
by Daily Sabah with AA Feb 14, 2019 12:09 am

Turkey's leading development aid agency has provided a shuttle bus to a rehabilitation center for people with disabilities in THE Georgian capital Tbilisi, reports said Wednesday.

The 18-seated shuttle bus donated by the Turkish Cooperation and Coordination Agency (TİKA) to the AISI Rehabilitation and Adaptation Center in Tbilisi will be used in social and cultural activities and for transporting residents to the city center.

Speaking at the shuttle bus delivery ceremony held at the rehab center, Turkish ambassador Fatma Ceren Yazgan said the center was a sign of friendly relations between the two countries.

Givi Çikobava, chairman of the AISI center thanked Turkey and TİKA for their support.

The ceremony was also attended by the Tbilisi coordinator of TİKA Necla Demirdağ, chairman of the Yunus Emre Institute in Tbilisi Ali Oğuzhan Yüksel, founder of the Georgia Strategic Analysis Center Nodar Kharşiladze, the AISI's administrative board and other employees.

TİKA has provided similar support to rehabilitation centers before. A center for people with disabilities in Georgia's port city of Batumi was renovated with the help of the aid agency in May 2017.

A similar shuttle bus was more recently donated by the aid agency to a rehabilitation center for homeless children in Peru in January.