Restorers give new life to gold leafs of Ottoman Empire 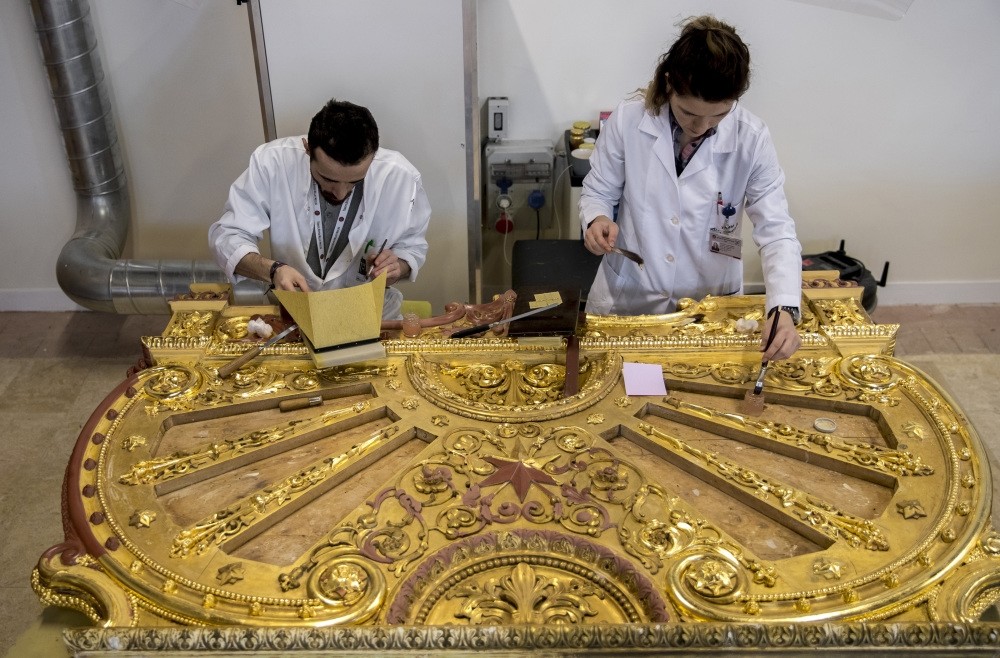 A testament to the gilded style of Ottoman motifs, gold leafs make a comeback in the hands of restorers who return leafs adorning furniture and walls to their glory days

In a corner of the National Palaces Administration in Ottoman-era Dolmabahçe Palace in Istanbul, a group of men and women hunch over precious pieces that once adorned the courts of sultans and manors. Meticulously piecing together broken pieces, they try to make them whole as they were centuries ago. They are the restorers in the Gold Leaf Workshop that was set up in 1999.

More than 100 objects, from mirrors to paint frames, from screens to sofas, all decorated with gold leafs, which were commonplace at the height of the empire, are being fixed in the workshop. Gold leafs are polished or pieced together again like a puzzle in the hands of restoration experts seeking to remain loyal to the authentic state of the objects.

Arzu Kural, the official in charge of the workshop, said they run two workshops, one in Dolmabahçe and one in Yıldız Chalet, another Ottoman-era building used by sultans in the last decades of the empire.

Speaking to Anadolu Agency, Kural said the workshops are successors to a similar practice of the Ottoman era. "There was also a workshop to restore gold leafs at the time of Sultan Abdülhamid II. Restoration craft for gold leafs was inherited by experts succeeding those in Abdülhamid's workshops, and since 1999, hundreds of objects have been restored here," she said.

"We first examine objects for damage when they are sent here and take multiple photos for archiving. Then, we work on their restoration in line with the technique used in their production. Sometimes, gold leafs are restored in their entirety, and sometimes, it only takes minor work to restore them to their former glory," she said. Kural added that techniques they use have been employed for centuries and were common as far back as 14th century Italy and France.

Restoration is tricky work, and even objects with minor damage take about a month to fix. Kural said they prioritize pieces from palace sections that are already being restored with a fixed finishing date. Currently, they work on gold leafs that adorned the bed of Sultan Abdülaziz, the 32nd sultan of the Ottoman Empire who reigned between 1861 and 1876. Gold leafs from the bed were heavily damaged due to corrosion and other time-related factors when it arrived at the workshop five months ago.

Gold leafs were more popular in the 19th century Ottoman palaces though the use of gold dates back to the rise of the empire during and after the reign of Suleiman the Magnificent in the 16th century. Gold and precious stones were used everywhere from everyday objects like utensils to weapons.