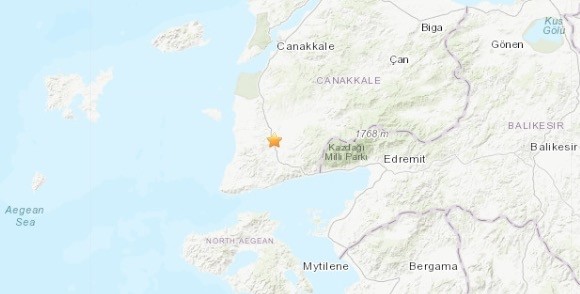 An earthquake with a magnitude of 5.0 struck near the town of Çanakkale on the northwestern coast of Turkey on Wednesday, the U.S. Geological Survey said.

The quake struck some 20 kilometers (about 12 miles) south of Çanakkale at a depth of 10 kilometers, the USGS said.

The temblor was felt all across the country's west, including Istanbul and the third biggest city Izmir.

Çanakkale Mayor Ülgür Gökhan said the earthquake lasted about 45 seconds, adding that no buildings were destroyed in the city.

The president of Turkey's Disaster and Emergency Management Presidency (AFAD), Mehmet Güllüoğlu, said emergency response teams are continuing work throughout areas affected by the earthquake, but so far, have not come across any injuries or loss of life.

He warned that certain buildings' structural integrity may have been comprised by the quake.

Güllüoğlu said that after the initial quake, "there were 12 more aftershocks, the biggest of which was 2.7."

The head of AFAD in Çanakkale, Levent Yılmaz, and Ayvacık Mayor Mehmet Ünal Şahin also reported that no destruction, injuries or deaths had been reported.

However, the headsman of one village in Ayvacık province reported that 10 unoccupied buildings were destroyed by the quake.