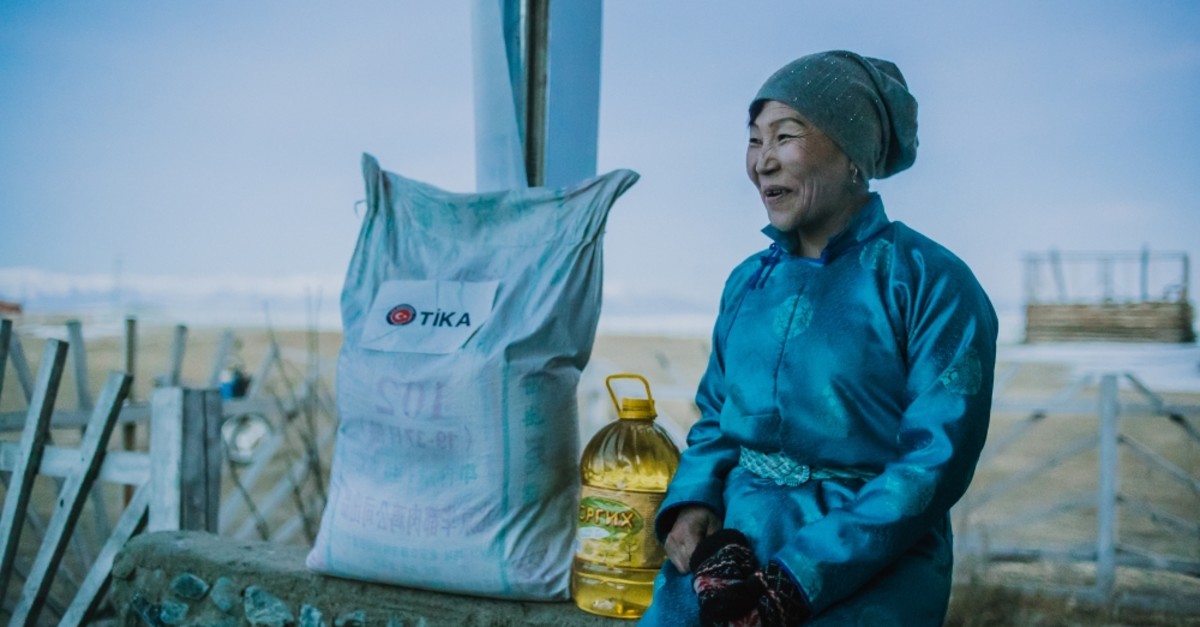 The Dukha people, a Turkic community living in northern Mongolia's Taiga region, were given food aid by the Turkish Cooperation and Coordination Agency (TİKA).

TİKA, which leads Turkey's international humanitarian efforts, delivered some 10 tons of food aid to the community whose numbers have dwindled to about 800 in the past few years. Turkish officials handed out food packages containing flour, oil, sugar, tea and rice to the community members who mostly make a living as reindeer herders in the Tsagaannuur region in Khövsgöl province. The region is barely accessible, particularly during winter months, when temperatures drop as low as minus 50 Celsius degrees. The Dukha community lives in an area two hour away from central Tsagaannuur.

It took a day and a half for TİKA staff to reach the community due to challenging road conditions, about 400 kilometers from Mörön, where the food packages were sourced from.

The Dukha community lives in Mongolia and Russia in geographically challenging areas. Some community members settle in town centers in winters while herders remain in the freezing Taiga or snow forests. They relocate in the summer months to the mountains for a better climate for their reindeer.

TİKA has previously sent aid to the community, including tents, coats, shoes and clothes to 50 households. A few years ago, the agency also donated 20 reindeer to the community.

The agency is also behind education projects for the Turkic group and repaired a school for 500 students in Tsagaannuur, furnishing it with education equipment and renovating a dormitory for students.

A festival will be organized in Tsagaannuur in August to celebrate the rise in reindeer numbers which is expected to exceed 2,000 by the summer. TİKA will help organize the event and provide traditional Dukha costumes for the festival that aims to revive traditions of the community whose culture face extinction as the population dwindles.

A research center and museum were established in Mongolia to keep the Dukha culture alive and TİKA plans to help the community earn tourism revenues by selling handicrafts to tourists visiting the region.

Believed to be related to the Tuvan people whose descendants live in Russia's federal Tuva republic, Dukhas have been living in Hövsgöl and its vicinity since the start of the Cold War that led to the closure of the Russian and Mongolian border. Reindeer are their main source of income. They use them as a means of transportation, use their milk and sell them, although the population of those animals, which are distinct to the region, has considerably dropped in the past decades. Apart from herding, they depend on income from tourists by selling handcrafted souvenirs and offering domesticated reindeer for rides. The failure of reindeer to adapt to changing weather conditions has forced them to relocate almost every month, from the mountains to Taiga and vice versa.

Established in 1992, TİKA is the leading institution responsible for the implementation of developmental projects and programs in more than 100 countries covering health and humanitarian programs, education and agriculture.