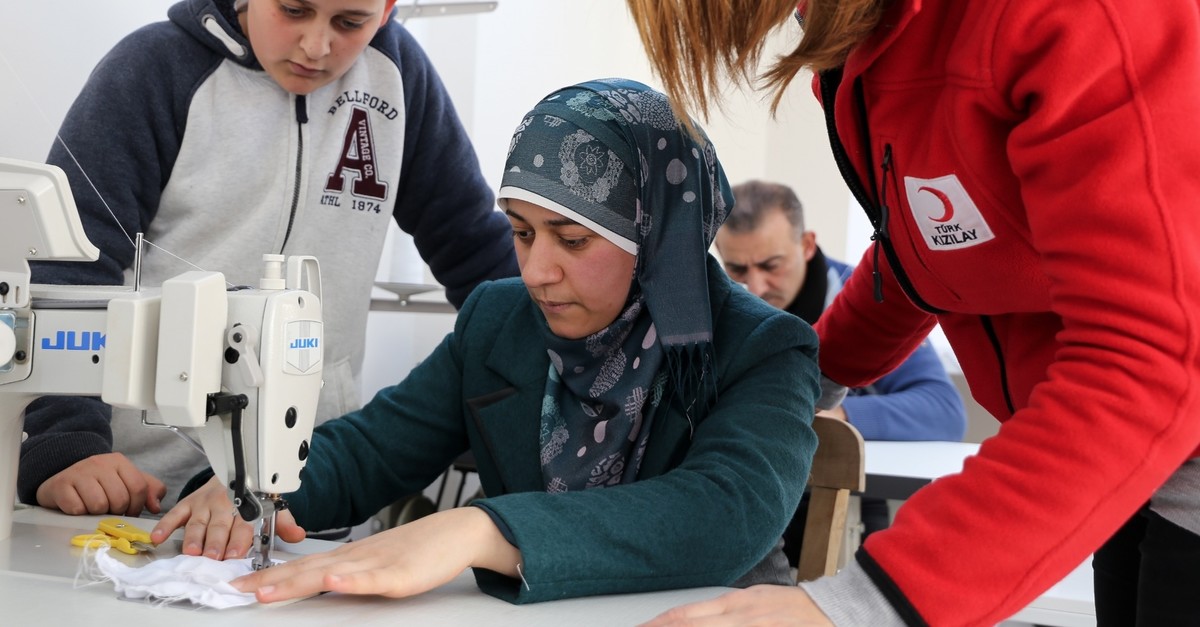 Turkey's humanitarian policies toward migrants and providing them with training for jobs have curbed deadly journeys to Europe via the Aegean Sea, said Red Crescent head Kerem Kınık

All they want is a better life and an income. This is what pushes many migrants to Europe. Through vocational training in its Community Centers, Turkish Red Crescent offers them a chance to have a decent income. The prominent charity's head Kerem Kınık says this has helped decrease the number of potentially deadly journeys via the Aegean Sea from Turkey to Greece and reduce the number of fatalities.

Fifteen centers run by the Red Crescent in Turkey, provide vocational training in various branches for migrants and local disadvantaged residents. Syrians, the largest refugee community in Turkey with more than 3.5 million people, make up the majority of trainees as they strive to start a new life in the country with no end in sight to the conflict in neighboring Syria.

Visiting such a center in Karabağlar in İzmir, the third largest Turkish city, located on the coast of the Aegean Sea, Kınık told Anadolu Agency (AA) that the charity has assumed basic responsibilities for refugee services. He said it covers everything from social protection, social inclusion to psychosocial support, vocational training and integration assistance. Kınık called the Kızılay Card [named for the charity's Turkish name], "the largest social security system," providing humanitarian aid in the form of cash in debit cards to about 1.5 million refugees from 70 countries in Turkey. He credits European Union funds for realizing these projects.

"Our community centers have been key for refugees not to be doomed to deadly journeys on the Aegean and Mediterranean Seas and to lead dignified lives until the day they return to their home countries. We try to deter them from these illegal journeys that endanger their lives. Combined with the Turkish state's humanitarian policies, fewer people die on those journeys nowadays," Kınık said. Official figures from the Turkish Coast Guard, which patrols the Aegean Sea to intercept illegal migrants, show only one person has died since January 2019 on these journeys and the number of migrants using the route dropped considerably in first two months of this year; 65 people died last year trying to cross to Greek islands from Turkish cities like İzmir.

In Karabağlar, 30 people, including Syrians and Turkish nationals, train in a textile workshop, learning how to sew shirts. Kınık said classes were formed in cooperation with local industry and they decided to launch the workshop based on demand from shirt manufacturers. "The workshop is endorsed by the local governorate and a chamber of shirt manufacturers in İzmir. We have morning or afternoon classes for trainees. Once they complete their training, they have an opportunity of employment with local businesses," he said.

The community center also offers extra classes for participants, such as Turkish language courses and seminars on health and psychological health. Participants receive certificates from the workshop-training program that enables them to apply for any job, and Kınık said they could produce their own shirts and even create a brand. Apart from the textile workshop, the Red Crescent also offers agriculture classes. Trainees learn to grow local produce like figs and olives in Red Crescent classes jointly organized with the Ministry of Agriculture. Siba Hammal Sabouni, a 44-year-old housewife from Aleppo, Syria, who fled her country six years ago, is a trainee at the community center in Karabağlar. Sabouni joined the training workshop with her husband and their two daughters. "I needed a job and learning how to sew a shirt gave me a chance. Others want to go to Europe so that they can live better, but [refugees] say they would stay if only there were jobs for them in Turkey. Turkey is our second home, and we don't want to leave it. We learned Turkish and adapted to our new life here. This is a safe and free country and besides, we have very good neighbors who love us," she said. Her daughter Fatma said attending the workshop gave her self-confidence. "I now know that I can find a job, at least a job with minimum wage. Before coming here, I didn't even know how to put a thread into a needle, but now I know everything about sewing," she said.