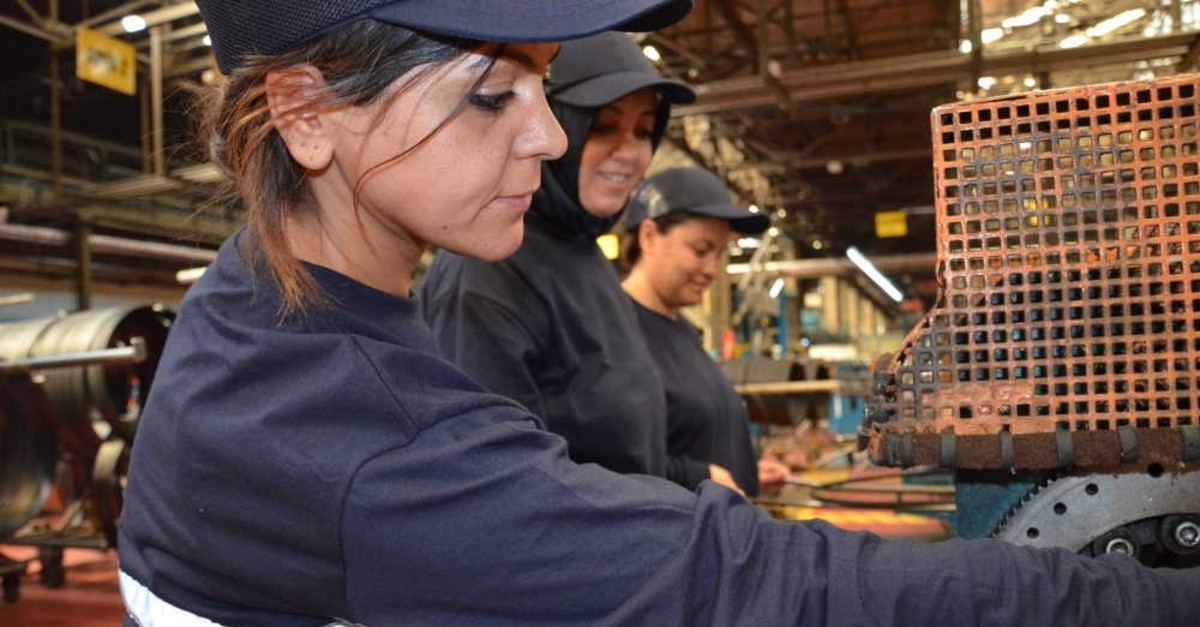 Women working at the Petlas tire factory in the central city of Ku0131ru015fehir. Female employment still lags behind men in the country.
by Daily Sabah with Agencies Mar 07, 2019 12:08 am

According to the country's official statistics agency, women live longer than men although they make up less of the population

Figures released by the Turkish Statistical Institute (TurkStat) yesterday, ahead of International Women's Day which will be marked tomorrow, show women make up 49.8 percent of the population. However, when it comes to life expectancy at birth, women have an average lifetime of 80.8 years, compared to men who are expected to live about 75.3 years.

Turkish women do not fare better than other women in the world in terms of employment, the statistics also indicate. Still, the proportion of women in upper and middle-level management positions was 17.3 percent, TurkStat says, based on 2017 statistics.

Statistics also show that the higher the educational status of a woman, the more likely she is to participate in the labor force. Labor force participation rate for women who graduated from universities was 72.7 percent while it was only 27.7 percent for those who completed high school. The highest women employment rate was registered in the service sector. It was lower in industry and agriculture compared to men.

The government has increased loans and incentives for female entrepreneurs in recent years to help boost their participation in the male-dominated workforce. It rolled out a series of incentives for working women, from longer maternity leaves to financial support for daycare needs, as well as payments to grandparents caring for their grandchildren with working parents. As for female entrepreneurs, the government already provides up to TL 50,000 in loans and plans to extend them to more women willing to set up their own businesses.

Other figures by TurkStat show the proportion of female professors in higher education was 31.2 percent in the 2017-18 education year and women constituted 22.1 percent of ambassadors who work at the Turkish Foreign Affairs Ministry.

TurkStat data also showed that the average age for women for first marriages in 2018 was 24.8, while that of males was 27.8 in Turkey.

As for internet access, women used the internet less than men, at 64.7 percent, compared to men at 79.2 percent. TurkStat figures also delved into the causes of disease-related deaths among women and found that women mostly die of cardiovascular diseases, followed by cancer and respiratory diseases.