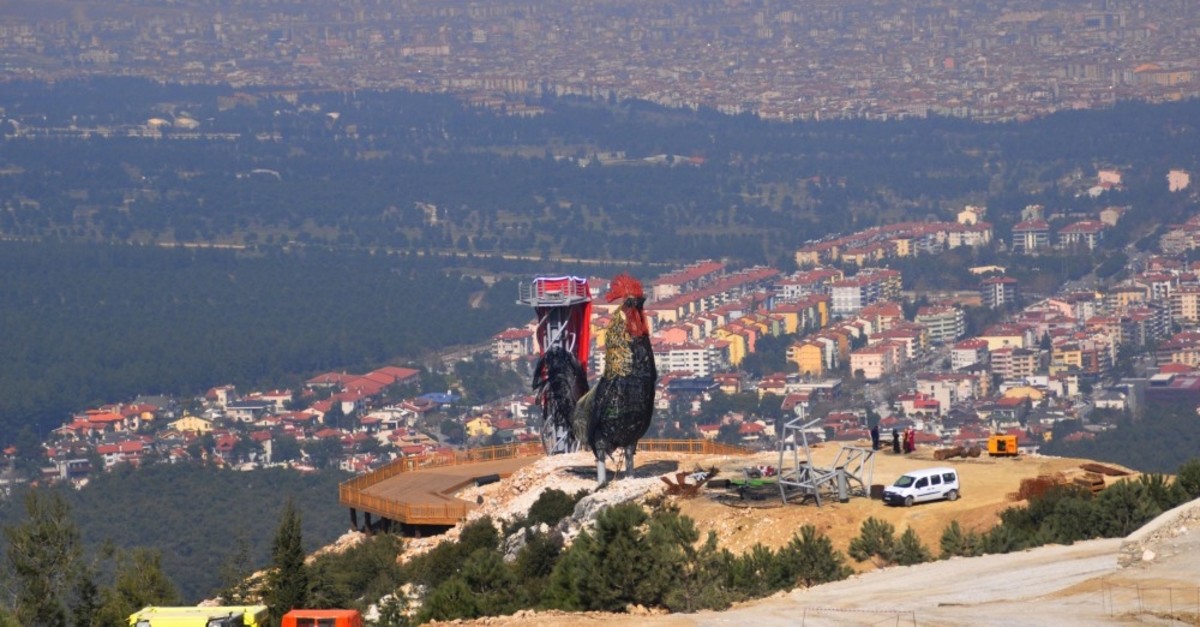 Once completed, the statue will be visible from all around the city.
by Daily Sabah with Agencies Mar 12, 2019 12:20 am

The Western Turkish city of Denizli may be more famous for Pamukkale, white limestone travertines and being one of Turkey's top tourist attractions, but a statue can change it all.

Like Christ The Redeemer of Rio De Janeiro, an iron fowl minus extended arms - or feathers for that matter - greets visitors to the city atop a hill overlooking Pamukkale. If the municipality which commissioned the 27-meter statue can have its way, it can even make it into Guinness Book of Records as the tallest rooster statue, a feat admittedly must be scarce in a world more fascinated with chickens than their companions with brighter feathers.

Pamukkale Mayor Hüseyin Gürlesin is determined to introduce the statue still under construction to the world with a Guinness entry, an opportunity to promote Denizli. Gürlesin joined officials and a curious crowd over the weekend for the opening of a set of social facilities on the hill where the statue is perched upon, including an artificial water fall which is part of a large forest and park. "The statue is not only number one in Turkey but also in the world for its size," Gürlesin boasted at the opening ceremony. It is either this or one of the best artistic uses of iron for Osman Atmaca, whose previous work, a 2-meter rooster statue made of marble and iron, faced opposition over claims that it should not be located in Pamukkale, a first-degree archeological site which is home to ancient city of Hierapolis. Atmaca started construction six months ago and used 26 tons of metal for the statue which will be visible from all corners of the city once it is completed. For those staying up late thinking about giant roosters, the statue will be fitted with a lighting system, municipality officials say.

The Denizli rooster is known for its colors and distinct crowing and has been associated with the city since Ottoman times. Known as a durable species due to their resistance to diseases, the roosters have come to be known as a symbol of the city.