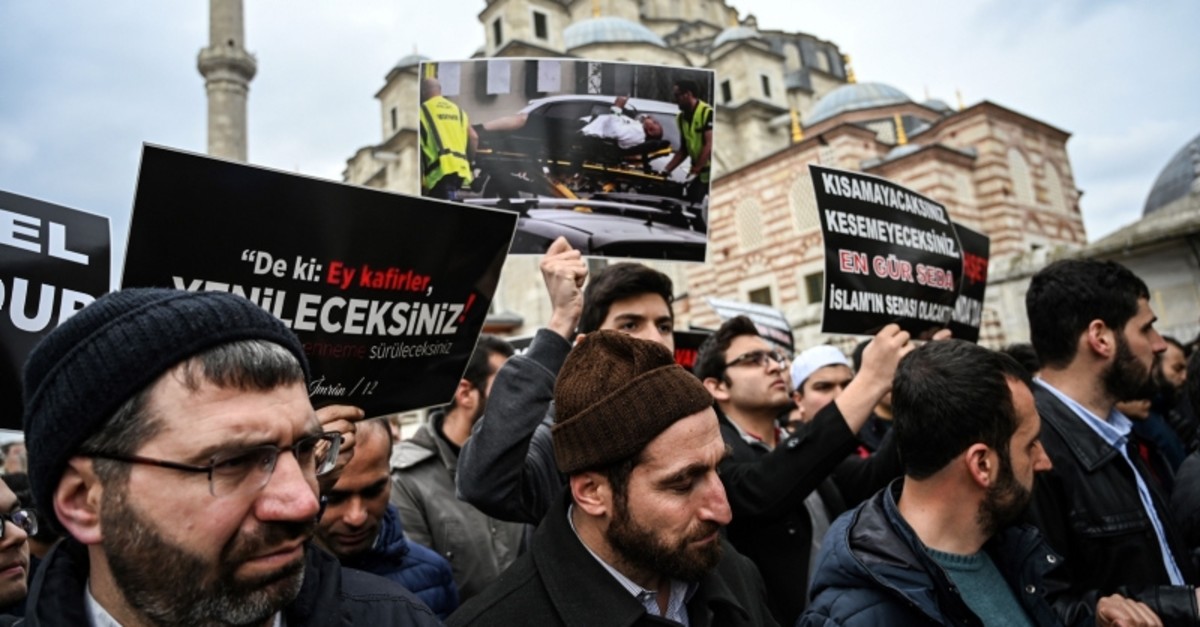 Protesters demonstrate to denounce New Zealand mosque attacks in Christchurch on March 15, 2019 at Fatih Mosque in Istanbul, after a symbolic funeral prayer for the victims of the attacks. (AFP Photo)
by Daily Sabah with AA Mar 15, 2019 5:37 pm

Protests were held following Friday prayers throughout Turkey. The Fatih Mosque in Istanbul also held a funeral prayer in absence Friday for the 49 people who lost their lives in the terror attack.

Ali Erbaş, head of the Presidency of Religious Affairs, defined Islamophobia as a "serious crime against humanity" and condemned violent attacks targeting mosques which are "venues symbolizing peace for all humans."

The Turkish Jewish community said on Twitter that special prayers will be held this Sabbath (Saturday) in synagogues administered by the Turkish Chief Rabbinate Foundation for those killed and injured in the attack.

Patriarch Bartholomew and the members of the Holy and Sacred Synod, during a meeting, "expressed their shock and dismay over the murderous attacks made against the people present at two mosques located in Christchurch, New Zealand," according to a statement.

"His All-Holiness and the Synodal Hierarchs unequivocally condemn every act of terrorism, hate and fundamentalism, and call everyone to work together, through dialogue, for the protection of all that is good, for peaceful coexistence and collaboration.

"They extend their heartfelt condolences and solidarity to the families of the victims, as well as their wholehearted wishes for strength and a swift recovery to all those wounded," the statement said.

The patriarch has also communicated with metropolitan myron of New Zealand to convey the above message to the local authorities, to the Muslim community and to all the people of New Zealand, it added.

In a statement released Friday, the Armenian Patriarchate said the nefarious attack has exposed the real face of bloody murderers.

"Terrorism, which has no religion or nationality, has become the biggest threat to humanity today," the statement said, noting that even though peace and love are the common messages of all religions, most terrorist attacks are made in the name of religion.

The patriarchate also said a common and determined international struggle against terrorism is necessary.

"Terrorism will not prevent the harmony of civilizations," the statement added.

At least 49 people were killed in the mass shootings at two mosques full of worshippers attending Friday prayers. One man was arrested and charged with murder in what appeared to be a carefully planned racist attack. Police also defused explosive devices in a car. Two other armed suspects were being held in custody. Police said they were trying to determine how they might be involved.