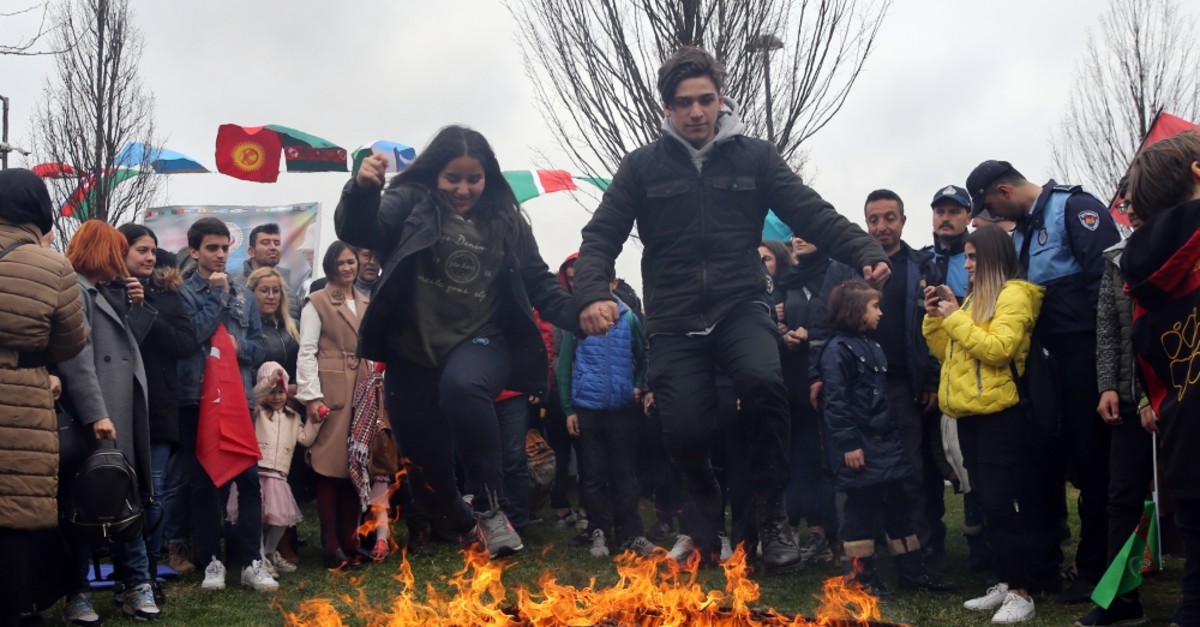 Nevruz, an ancient festival observed from Turkey to Asian countries, was celebrated Thursday across the country to welcome spring. Bonfires and the revival of old Turkic traditions are a staple of nationwide celebrations

Spring is here no matter how low the temperatures dropped in Turkey's west this week. Nevruz, an ancient festival celebrating the arrival of the season, was an opportunity for many to warm up around bonfires before jumping over them in a widely observed tradition.

In Istanbul, hundreds of people, including those from Turkic nations where Nevruz is a spectacular event, gathered in a park to mark the day. At the festivities in Topkapı Culture Park, people of all ages gathered around open flames and leapt over them. Traditional foods were served to revelers at the festivities.

The festival, which also symbolizes brotherhood and peace, is celebrated mainly in Iran, Afghanistan, India, and Turkic republics such as Azerbaijan, across the Caucasus region and in Albania and Macedonia. A U.N.-recognized international cultural day, Nevruz marks the start of a new year and is considered as a forerunner of spring.

The origins of this ancient tradition are a matter of historic debate, Nevruz, which means "new day" in Persian, is said to have its origins in Zoroastrianism, the religion of pre-Islamic, Persian empires. According to this religion, March 21 is considered the day of the earth's creation and the first day of the new year. While some claim that Turks living in Central Asia were the first people to celebrate the coming of spring, the principle view of Nevruz according to Turkic tradition is the celebration of independence. It marks the day of departure from Ergenekon, where Turks were trapped for years before a blacksmith melted the rock and Asena, a grey wolf, led them to freedom. Ever since, Nevruz has been accepted as the beginning of the new year by Turkic nations around the world and is still honored with vibrant celebrations, including festivals. Blacksmiths beating iron are also part of celebrations at the festival.

The event in Istanbul to mark Nevruz was started with an Ottoman janissary band show, which was organized by the Istanbul Metropolitan Municipality. As part of the festival, a fire was lit, iron and stone were beaten and traditional Kyrghyz and Turkmen dances were performed at the event.

Before performing a Kyrgyz traditional dance called "Ak Kuu" with her 11-people group, Funda Kılınçarslan, head of the youth branch of the Turkic World Research Foundation, said, "Our aim with this event is to strengthen the ties among the Turkic world and make people remember their historic ties."

"Nevruz means unity and togetherness," Kılınçarslan stressed. "We along with all the brothers and sisters celebrate the arrival of spring and wish [for] a fruitful year."

President Recep Tayyip Erdoğan, who had issued a message on the occasion of Nevruz earlier, also spoke about the festival at a rally in western city of Kütahya yesterday. Erdoğan said Nevruz was a festival "of brotherhood, of hopes and love blooming in hearts," while criticizing terrorist groups for "hijacking" it.

Nevruz celebrations were used as a propaganda tool for the terrorist group PKK, which claims to fight for Kurdish self-rule in southeastern Turkey. Pro-PKK groups commonly term it as "Kurdish New Year" and Nevruz rallies by groups affiliated with the PKK had turned into violent riots in recent years. Police in Diyarbakır, southeastern city where a rally by pro-PKK groups was held on the occasion of Nevruz, detained 30 people who clashed with the police after the rally ended.