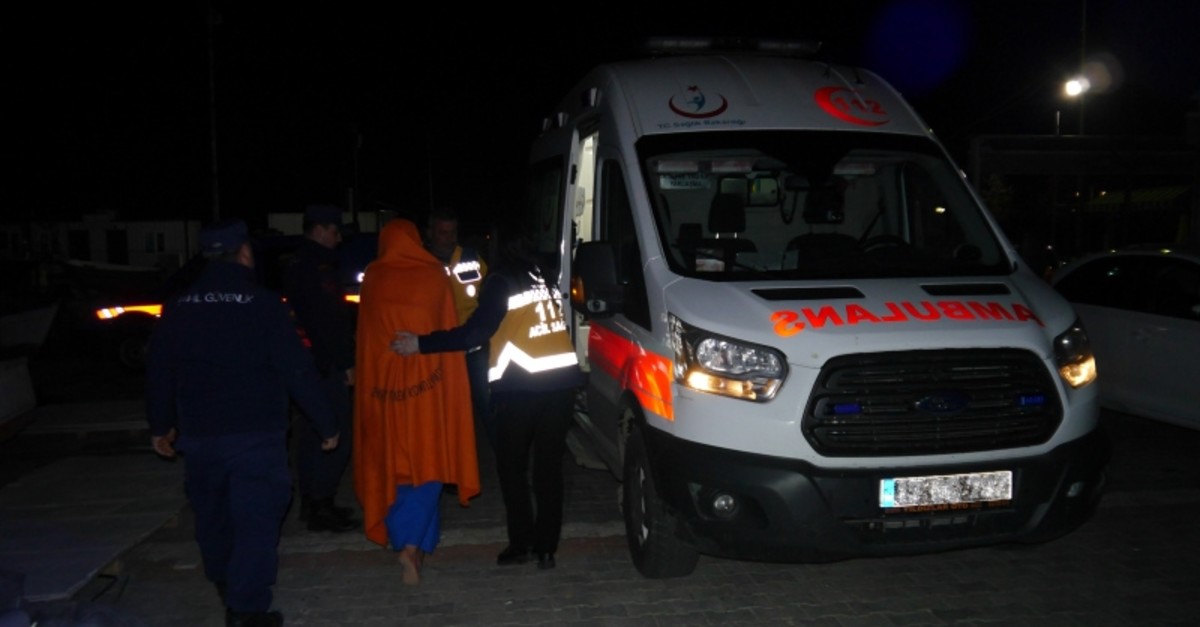 A boat carrying 15 illegal migrants sank early Tuesday off the Aegean coast of Ayvacık, killing three women and a baby, while the rest were rescued by the Turkish Coast Guard.

The migrants, who hail from Afghanistan and Iran, were trying to reach the Greek island of Lesbos that is about 10 miles away from the town of Ayvacık in the Turkish province of Çanakkale. The bodies of three women and an infant were found floating near the accident's site by the coast guard, who combed the area after seeing the sinking boat.

Eleven aboard were taken to hospitals on the coast for treatment of slight injuries. The cause of the incident is not yet known but migrants often run the risk of death in unsafe, overcrowded boats or due to bad weather while traveling to Greece, their gateway to Europe, from Turkey.

A few hours after the incident, gendarme units in Ayvacık stopped 46 Afghan illegal migrants in an olive orchard near the coast as they were heading to the shore to board a boat for Greece.

Turkey has been a main route for illegal migrants trying to cross into Europe in recent years, especially after the eruption of the conflict in Syria and the constantly deteriorating security situation in Afghanistan. Some 265,000 illegal migrants were held in Turkey in 2018, according to the Interior Ministry.

Figures by the Turkish Coast Guard, whose crews regularly patrol the seas against illegal migration, show that 3,975 people were intercepted in the Aegean Sea between January and March and one person was killed in the sinking of a boat carrying migrants in the same period.

Last year, 25,398 people were stopped on the Aegean Sea en route to nearby Greek islands while 65 people died when their boats sank. To reduce the number of illegal migrants on the dangerous Aegean Sea route, Turkey and the European Union signed an agreement in 2016. The deal stipulates that Greece is to send back migrants held on its Aegean islands back to Turkey. In return, Turkey is to send Syrian migrants it hosts to various European Union countries.

The deal also saw an escalated crackdown on human smugglers and increased sea patrols to prevent immigrants and for a while, helped reduce the number. Yet, some desperate migrants still take the route even in the winter months when a safe journey through the Aegean is nearly impossible aboard overcrowded, unsafe dinghies. Deaths are common in crossings to reach the Greek islands scattered across the Aegean region, some of which are only a few kilometers away from Turkish shores.

In related news, police in Muğla, a southwestern city popular among migrants trying to cross into Greek islands, launched a crackdown on a gang of human smugglers and issued arrest warrants for 11 suspects. Accounts of illegal migrants interviewed by Turkish media show that they pay hefty sums to smugglers to help them sneak into Greece, but more often than not, migrants are left to fend for themselves after smugglers provide them with dinghies and abandon them on the coast. Some accidents are linked to inexperienced migrants forced to steer the boats themselves along the dangerous route to the Greek islands.