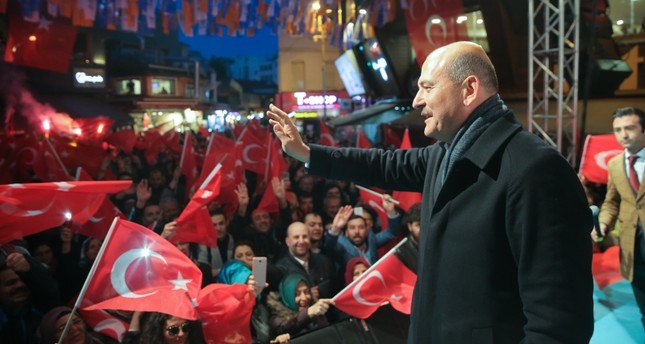 Interior Minister Süleyman Soylu waves at a crowd during an election in rally in Beşiktaş, Istanbul, March 29, 2018. (AA Photo)

Some "318,500 Syrians have returned home, as there is peace in Syria now," said Soylu, addressing a crowd in Istanbul.

He recalled that Turkey neutralized 3,333 terrorists in two years of cross-border and nationwide counter-terrorism operations.

Since 2016, Turkey's Euphrates Shield and Olive Branch operations in northern Syria have liberated the region from PKK-linked People's Protection Units (YPG) and Daesh terrorists, including towns of Al-Bab, Afrin and Azaz, making it possible for Syrians who fled the violence there to return home.