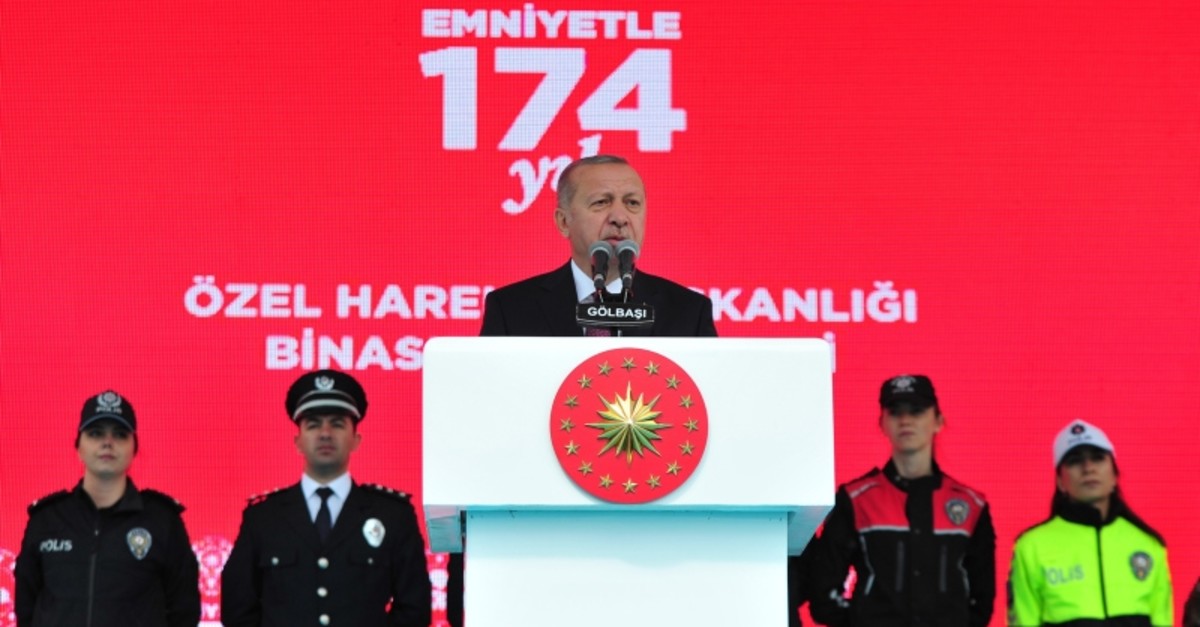 The Turkish National Police celebrated the 174th anniversary of its foundation on Wednesday, taking the occasion to remember officers killed on duty.

Now a part of the Interior Ministry, the National Police traces its origins back to an Ottoman decree published on April 10, 1845, that defined the duties of law enforcement.

Events were held across the country to mark the day, with citizens giving flowers to police officers. The most high-profile event, however, was held at Gölbaşı in capital Ankara.

President Recep Tayyip Erdoğan and ministers joined police chiefs to mark the day and remember the 51 police officers who died at the police's Special Operations Unit headquarters three years ago. The officers were killed in an airstrike carried out by the putschists on July 15, 2016.

Erdoğan unveiled the new headquarters built on the site of the destroyed building and gave an emotionally charged speech, thanking the police for their service to the country.

"The National Police, especially the Special Operations Unit, worked side by side with citizens to save places occupied by FETÖ terrorists that day," Erdoğan said, referring to the Gülenist Terror Group (FETÖ) which employed its military infiltrators for the coup attempt.

"They played a key role in quelling the coup," Erdoğan added. "We have 51 martyrs here and everyone has a story like Halit Gürsel, who refused the proposal for retirement though he was wounded in a PKK attack in Diyarbakır and continued to serve before he was martyred in the FETÖ attack," Erdoğan said.

The president expressed his gratitude to other officers who died or were wounded while fending off the coup attempt, "outside the army headquarters, police headquarters, presidential complex, everywhere from Istanbul to Ankara," reminding a total of 63 police officers were killed by putschists that night.

He added that Turkey did not let the culprits of the coup attempt get away with their crimes, adding that there were currently 30,559 FETÖ suspects in prison though he lamented the fact that 4,446 among them were "traitors," FETÖ infiltrators in the law enforcement.