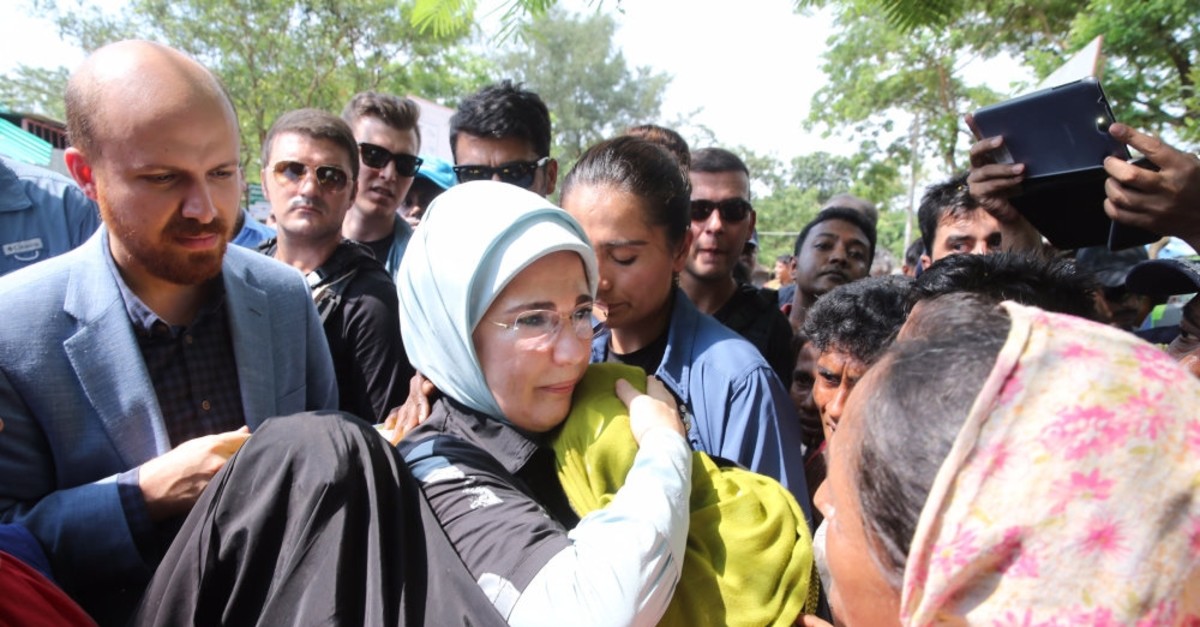 Emine Erdou011fan hugs a refugee woman during a visit to a refugee camp for Rohingya Muslims in Cox's Bazaar, Bangladesh in 2017. The first lady was hailed for leading humanitarian efforts for the displaced community.
by Daily Sabah with AA Apr 17, 2019 12:09 am

First lady Emine Erdoğan was chosen as a ‘Changemaker' by the World Humanitarian Forum for her inspiring work and humanitarian efforts. She will join the forum in London today for a speech, along with representatives of Turkey's renowned charities

The World Humanitarian Forum, which brings together leading philanthropists and nongovernmental organizations, will award first lady Emine Erdoğan with the Changemaker award today at an event in London. The award recognizes inspiring personalities from around the world and for Turkey, and it is viewed as recognition of the work of charities and development agencies like the Turkish Cooperation and Coordination Agency (TİKA), the Disaster and Emergency Management Authority (AFAD) and the Turkish Red Crescent. Representatives of those agencies will also attend the forum.

Erdoğan was picked for playing a leading role in bringing attention to humanitarian problems and organizing aid for victims of natural disasters. It will be her fourth award on the same subject. The first lady, like her husband President Recep Tayyip Erdoğan, has been lauded for giving a voice to the oppressed and championing an open-door policy for refugees. She was behind a convention of spouses of leaders of the Arab world and Western countries in Istanbul for a call to stop Israel's attacks against Gaza in 2009 and for lifting the Israeli blockade on the Palestinian territory. Erdoğan also launched a campaign to mobilize international charities for millions of people affected by one of the worst floods to hit Pakistan in 2010.The first lady also led a Turkish delegation to Myanmar in 2012 to the region where ethnic Rohingya Muslims lived, despite security warnings, and delivered humanitarian aid to the community while raising awareness for the plight of Muslims displaced due to ethnic violence. She also led another humanitarian delegation, this time to Bangladesh where Rohingya Muslims took shelter, in 2017.

Emine Erdoğan is also credited for her role in Turkey's "African opening," which was launched by the government of President Erdoğan in 2005. The first lady accompanied her husband on a number of trips to African countries that have suffered from conflicts, terrorism and economic hardships and served as patron of a number of Turkish projects in Africa for humanitarian work for women and children in the fields of health and education.

Awards are chosen by a committee headed by former British Foreign Secretary Jack Straw. Other recipients of the award are former British Prime Minister Tony Blair and his wife Cherie Blair, the Panama International Humanitarian Aid Center and the company Mastercard. The Blair couple will be recognized for their work through their Institute for Global Change and Foundation for Women.

The World Humanitarian Forum will host a wide array of guests from key humanitarian actors including Oxfam, the United Nations, the International Committee of Red Crescent and the Red Cross. More than 5,000 public and private sector officials from more than 50 countries are expected to attend the two-day event that will focus on financing humanitarian work, new partnership models, food security and disaster management.