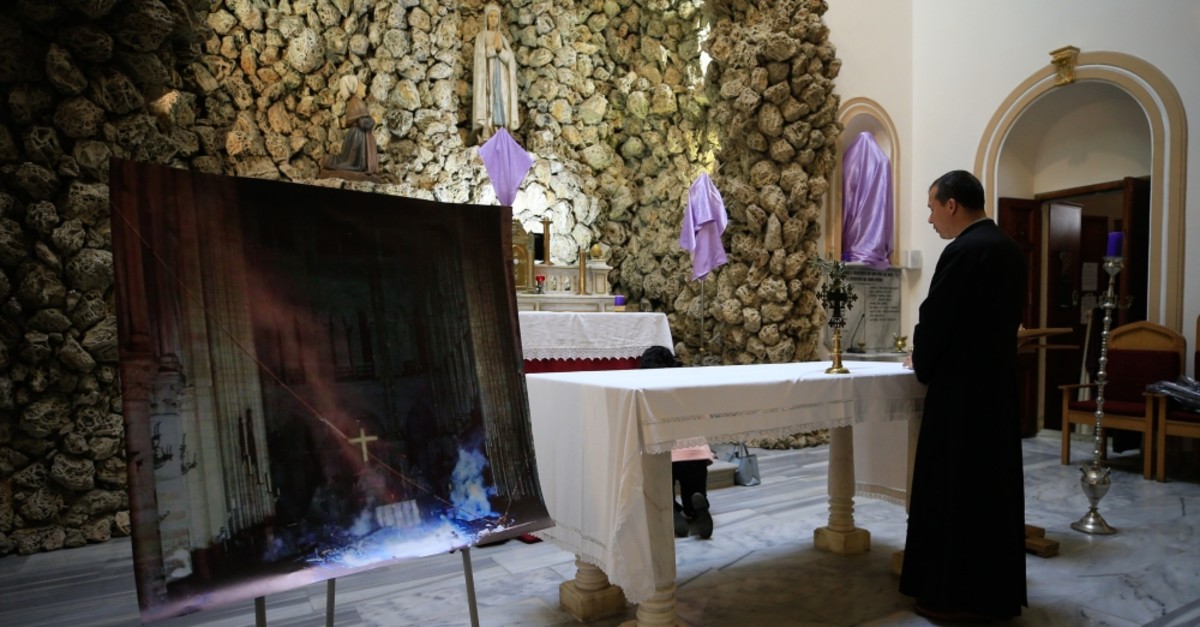 Father Gabriel Ferone stands next to a photo of Notre Dame Cathedral inside the church.
by Daily Sabah with Agencies Apr 20, 2019 12:18 am

As donations pour in for the iconic Notre Dame Cathedral in Paris that suffered from a devastating fire last Monday, a church with the same name in western Turkey also joined in.

The 120-year-old Notre Dame de Lourdes church in Izmir, with a congregation that consists largely of people of French origin tracing their history to Ottoman times, also known as Levantines, collected donations for the cathedral.

Photos of the more famous cathedral were also hung on the walls of the church. Speaking to Anadolu Agency (AA), Rev. Gabriel Ferone said they were saddened when they watched the burning of the cathedral on TV. "It was the heart of France. It was a place where the French went to pray in difficult times. We were shocked to see it burning," Ferone said. "It was a great disaster for the French, and we prayed all night here on Monday. I thought about launching a donation campaign here, but the churchgoers themselves came here to donate before I asked them," Ferone said.

The pastor said the fire worried not just the French or Christian community but also other nations and faiths. He said they received messages of consolation from Turks. "We are grateful, but we should not be greatly worried. All sacred objects were salvaged after all. It will also be renovated," Ferone added.

Notre Dame's roof and spire were destroyed in Monday's blaze, but the main body of the Gothic cathedral suffered only limited damage to its stone vaulted ceiling. French President Emmanuel Macron said the cathedral should be fully restored within five years. Some of France's biggest companies and richest tycoons, including luxury goods rivals Francois-Henri Pinault and Bernard Arnault, have pledged amounts of 100 million euros ($112 million) or more for Notre-Dame's restoration.