The Anzac trenches along the Bolton's Ridge (Abdül Vahap Sırtı) where the Gallipoli Campaign took place in northwestern Turkey have been unearthed after 104 years, as thousands of people visit the area to mark Anzac Day.

Ismail Kaşdemir, an official who is in charge of the area where the battles took place, told Anadolu Agency that it is one of the best-protected war sites in the world.

Noting that the site contains many traces of the war, including fortresses, trenches and bastions, Kaşdemir said teams are spending tremendous efforts to unearth the remnants. 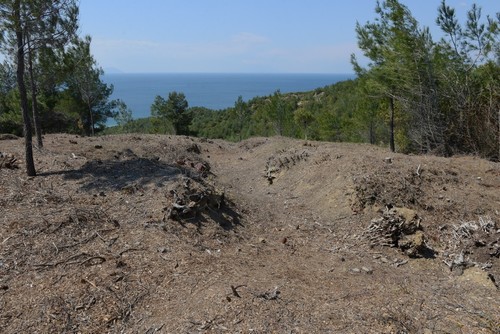 "We determined to unearth all the trench lines used during the Gallipoli Campaign. We know very well where the trenches are located, and which trench line crosses through others, thanks to old maps, satellite images and geothermal radars," Kaşdemir said.

He added that they aim to make sure the authenticity of the site is not damaged during the works, ensuring more visitors can get a glimpse of the region's history.

After the excavation works are finished, visitors will be able to understand the atmosphere of trench warfare and visualize the magnitude of the close combat that took place during the campaign.

Kaşdemir noted that they are working with diplomatic representatives of Australia and New Zealand, both of which have expressed their delight regarding the efforts.

"Our goal is to protect the traces of the great war fought at this site and open it to visitors without being damaged," Kaşdemir added.

This year, the 104th anniversary of the first landing by Anzac troops will be marked. In the eight-month campaign, more than 44,000 British, Irish, French, Australian, New Zealand, Indian and Canadian troops and nearly 87,000 Ottoman soldiers were killed.