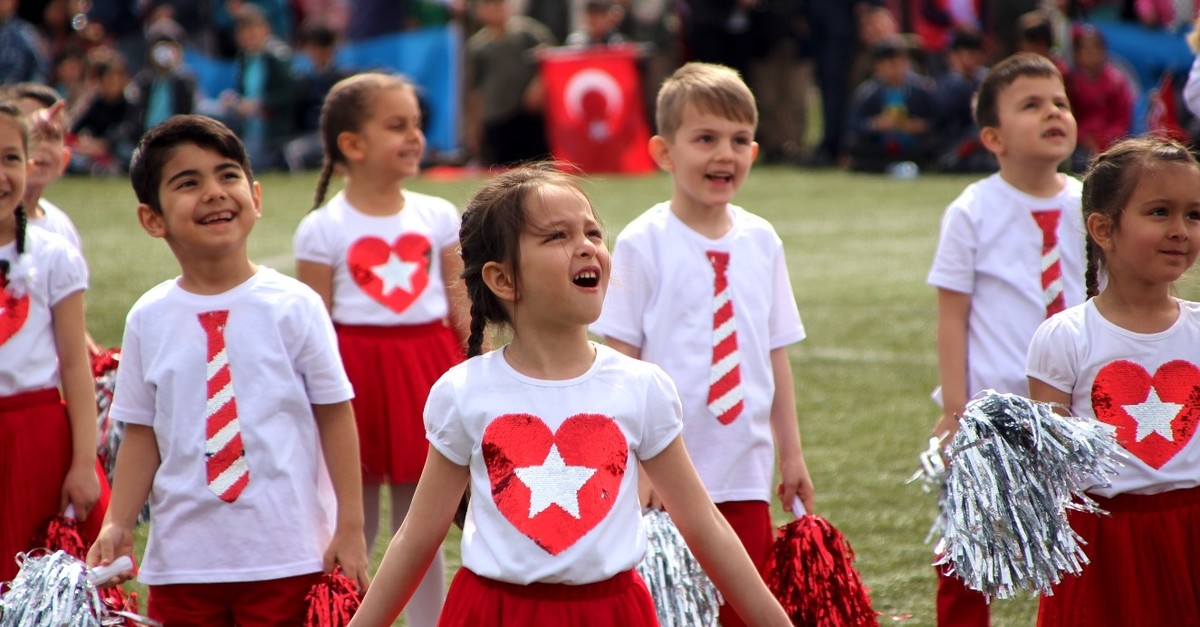 In a series of festivals and events across the country, Turkey Tuesday celebrated the 99th anniversary of the first season of its Grand National Assembly and also National Sovereignty and Children's Day. Senior politicians, including Parliament Speaker Mustafa Şentop and the main opposition Republican People's Party (CHP) leader Kemal Kılıçdaroğlu visited the mausoleum of the Republic's founder Mustafa Kemal Atatürk in the capital Ankara.

"Our determination to work continues for our country's unity and solidarity, and for nation's peace and welfare," Şentop wrote in the mausoleum's memorial book. Şentop also said the Parliament continues to work for Turkey's development and welfare.

President Recep Tayyip Erdoğan received a group of children at the Presidential Complex, where they followed the annual tradition of taking the seats of Cabinet ministers. Erdoğan symbolically gave his seat to Okan Sözeyataroğlu as Turkey's head of state. The sixth-grade student took questions from the press on current issues in Turkey.

Chatting with the visiting children during the reception, Erdoğan voiced his pleasure over hosting them at the Presidential Complex, and added: "On my and my people's behalf, I congratulate you, our children, the assurance of our future, on April 23rd National Sovereignty and Children's Day." 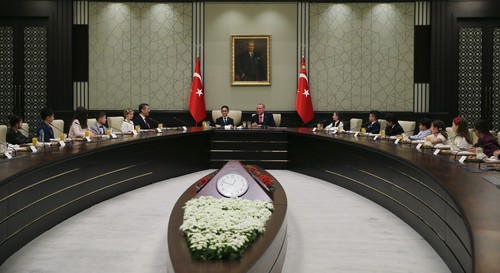 Recalling that the day was also the 99th foundation anniversary of the Grand National Assembly of Turkey (GNAT), he said he remembers with gratitude everyone, first and foremost Mustafa Kemal Atatürk, who contributed to the foundation of the Republic of Turkey and its coming to these days.

Later, a special session was held at Parliament, attended by Erdoğan and opposition leaders. ''We are working for a greater, stronger, richer and more stable Turkey where our future children will live. As a nation, we see our children as the most precious asset in the world,'' the president also said in a statement released by the Presidential Office on Monday.

"The day of our Parliament's foundation was given to children and future generations by the great leader Mustafa Kemal Atatürk," said Kemal Kılıçdaroğlu, in a message posted online to mark April 23. "This gift is the symbol of the Turkish Parliament's never-ending responsibility to our country. Therefore, the greatest legacy to leave to our children is a free and just Turkey."April 23, originally marked as a holiday on the occasion of National Sovereignty Day, has also been celebrated as Children's Day since 1935. It dates back to earlier years, though, according to historians. It was first observed unofficially in 1925 as a children's day by a children's charity endorsed by Mustafa Kemal Atatürk, the founder and first president of the Republic of Turkey, who declared the day as Children's Day. 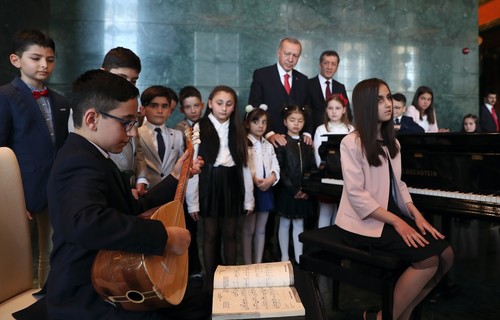 Atatürk, who had no biological children, was a foster father to a number of children and is known for his good interaction with children. Atatürk had allocated a farm in Ankara and public buildings for the first large-scale celebrations of the day in 1927. "I dedicated this day to children to show respect to the children. Respecting them equals respecting the future of the nation," Atatürk was quoted in his dedication of April 23 to the children.

In addition to events across Turkey, April 23 is also celebrated internationally by the Turkish community abroad and in Turkey's missions abroad.

A colorful ceremony was held at Pak-Turk Maarif School Islamabad, organized by Turkey's Maarif Foundation. Turkey established the Maarif Foundation in 2016 after a coup attempt to take over the administration of overseas schools linked to the Gülenist Terror Group (FETÖ). It also establishes schools and education centers abroad.

"Today is a very special and significant day for the Republic of Turkey, this day indicates an important milestone in the national history of the Turkish republic as it is the day when the Turkish Grand National Assembly was founded in Ankara by our great leader Mustafa Kemal Atatürk," said İhsan Mustafa Yurdakul, Turkey's ambassador to Pakistan, at the event.