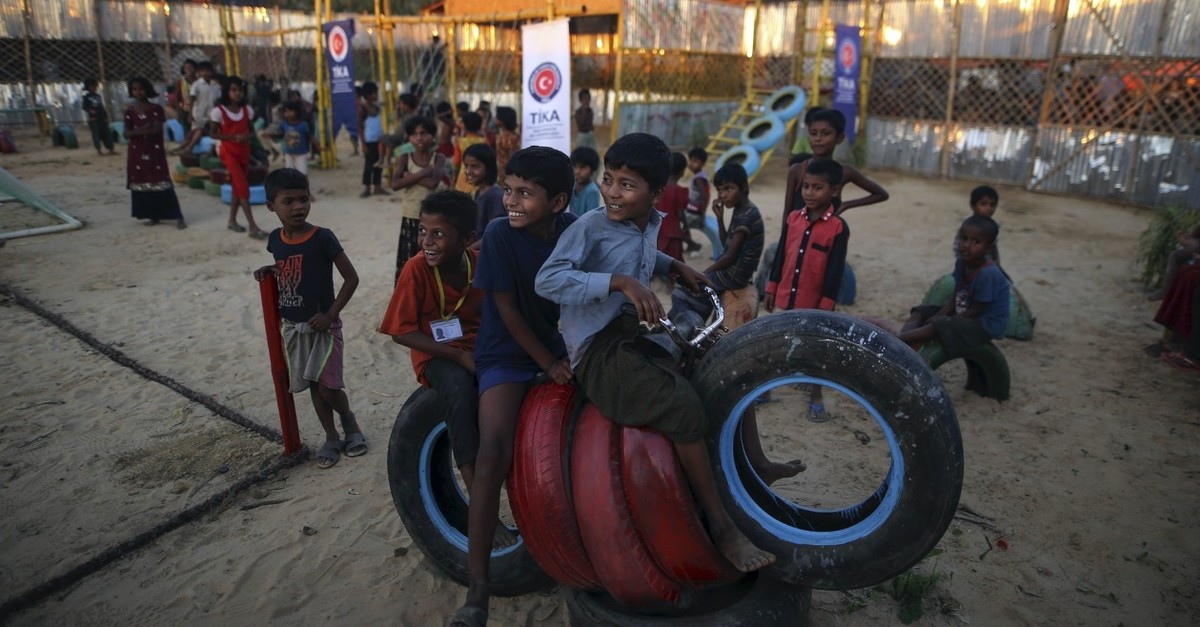 Ameena Begum, 22, is stitching a dress at a sewing center located at a refugee camp in Cox's Bazar, Bangladesh. Begum, a mother of one, is among the thousands of Rohingya Muslims who fled a military crackdown, which started on Aug. 25, 2017 in Myanmar's Rakhine State. She no longer waits for aid to come to her; instead, she spends a good part of the day making both male and female clothing at a training center run by the Turkish Diyanet Foundation (TDV), an aid organization run by Turkey's religious authority.

"It seems to me now that I am a human being, and I am doing something for my family. I dream of going back to my homeland [Rakhine] and set up a small tailor shop there," Begum told Anadolu Agency (AA). Another Rohingya trainee at the sewing center, Morium Hatun, said: "After losing my own country, I am now living in a country where I can work. It's a great pleasure for me amid piles of sorrow."

"We have already trained up to 40 young Rohingya women and donated sewing machines to all of them. Currently, we are providing training to another 40 Rohingya girls," TDV project officer Abdul Kayum told AA.

He added: "Now Rohingya women stitch clothes at our training center that are later distributed at the camps. Thus, we are trying to make Rohingya people independent, confident and keeping their dreams alive."

"We also have plans to expand our sewing training program so that we can include more Rohingya women," he said.

'Never thought I will get a chance to work'

Near the sewing center, the TDV has also set up a soap factory. Seven Rohingya people supervised by an engineer are working there. Every worker in this soap factory is being paid a monthly wage of 7,000 Bangladeshi taka ($82.90). The factory manufactured 15,000 pieces of soap in the first phase, which will be distributed among Rohingya families. This small factory will be expanded to accommodate and train more Rohingya people.

"As a refugee in Bangladesh, I had never thought I will get a chance to work and earn a living," Abdus Salam, a worker at the factory said.

A center for educational training has also been established in the area. Rohingya of all ages gather here to attain primary-level literacy and attend other awareness sessions. Currently, 1,400 schoolchildren are being provided books, pencils and clothes by the TDV. "We are planning to cater to the needs of 20,000 Rohingya children this year," Kayum added.

The Turkish Cooperation and Coordination Agency (TİKA), a state-run aid group, has also organized various programs for the mental growth of Rohingya children. It has set up a park near a camp in Ukhia where more than 100 children can play at a time.

Furthermore, the Turkish Disaster and Emergency Management Authority (AFAD) is running a large field hospital with an intensive care unit.

He added that the hospital has 30 beds to admit patients for long-term treatment and two ambulances for emergency transportation.

"We have a well-stocked pharmacy and supply free medicine to Rohingya people and the needy," he said.

The U.N. has also documented mass gang rapes, killings – including of infants and young children – and brutal beatings and disappearances committed by Myanmar state forces.

In a report, U.N. investigators said such violations may have constituted crimes against humanity.