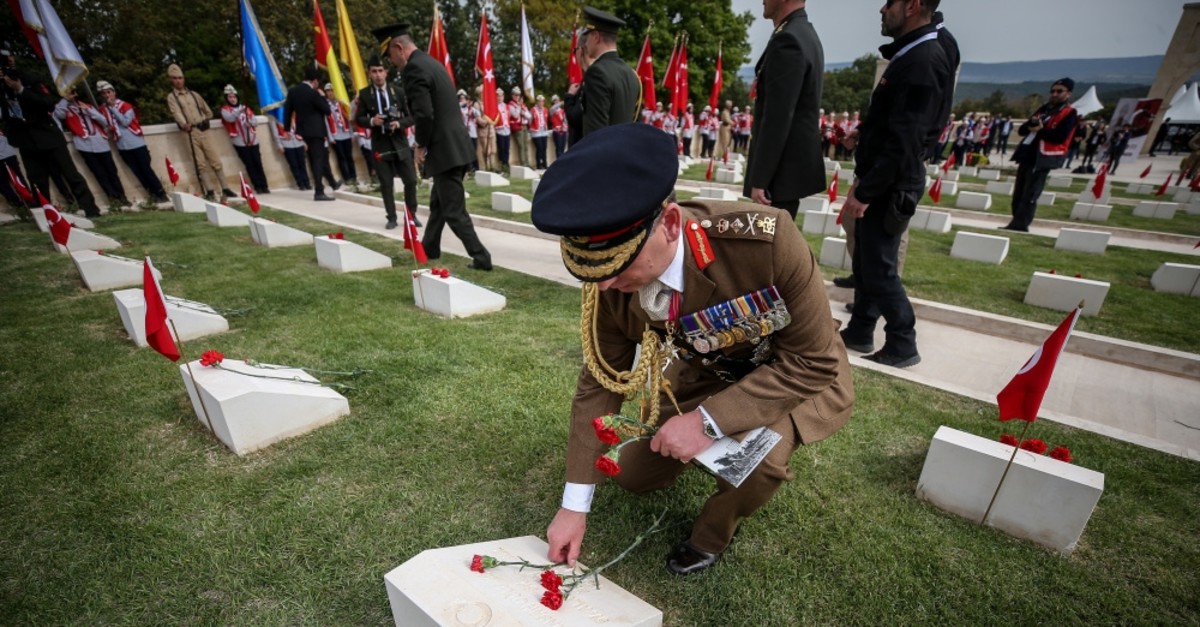 British Chief of General Staff General Sir Mark Carleton-Smith lies flowers at the grave of a fallen soldier at the commemoration ceremony in u00c7anakkale, April 24, 2019.
by Daily Sabah Apr 25, 2019 12:10 am

Turks, Australians and New Zealanders came together Wednesday 104 years after they fought each other, to remember their fallen ancestors in Çanakkale and marked the anniversary of the land campaign in Gallipoli

Two days of commemorative events to mark the 104th anniversary of a World War I campaign that changed the fate of three nations started Wednesday in the northwestern province of Çanakkale. Representatives from Turkey, New Zealand, Australia as well as French and British delegates attended ceremonies to remember the fallen soldiers of the then-fighting sides of the Gallipoli or Gelibolu campaign.

The campaign that started on April 24, some 104 years ago was the first land push by the Allied forces to advance inside Ottoman territory after naval assaults.

Australian and New Zealander troops, a collective force referred to as Anzac, were on the front line in the campaign to capture this strategic location next to the Dardanelles or Çanakkale Strait. They outnumbered Ottoman troops but disorganization and the unfamiliar territory played into the hands of Ottoman forces in this campaign to capture the Ottoman capital of Istanbul. Thousands of Ottoman Turkish troops and Allied forces were killed in the campaign.

Visitors from Australia and New Zealand gathered in front of a massive monument for a solemn commemoration ceremony Wednesday that started with the recitation of the respective countries national anthems. Representatives of each country that joined the campaign then made speeches highlighting the improved ties long after the war and emphasizing the sacrifice of the fallen troops. Speaking on behalf of Turkey, Minister of Culture and Tourism Mehmet Nuri Ersoy said the Turkish nation was part of "a new saga" 104 years ago that was shaped by love for their country. "Despite their limited weapons and ammunition, the Turkish army defeated the most advanced armies of the time at sea and land. This was a victory that was a turning point for our future as well as the world's military and political history," Ersoy said. The victory, at a time of decline for the Ottoman Empire, paved the way for a successful independence campaign led by Mustafa Kemal Atatürk in the aftermath of World War I.

The minister also pointed to Turkey's embrace of fallen Allied soldiers, who were given a proper burial in cemeteries across the battlefield. "As Atatürk said to mothers of the fallen soldiers once, their sons are in the heart of Turkey and would rest in peace here as sons of Turkey," Ersoy said.

Speaking on behalf of former Allied forces countries, British Chief of General Staff Gen. Sir Mark Carleton-Smith said his great-grandfather, a captain in the army, was among the soldiers that died in Çanakkale, "somewhere in Suvla Bay," the point of an amphibious landing during World War I, and his body was still missing.

He said his name, however, was still on the monument in Çanakkale. "I am the first person from his family to visit this beautiful peninsula. My family always viewed this place as a "forever British" part of a foreign land. It is a great honor for me to represent former Allied states today and to remember service, sacrifice and suffering of soldiers from both sides 104 years ago," Carleton-Smith said.

The British general said both sides had many heroes and respected each other despite the war, giving examples of Turkish and Anzac soldiers pausing the battle for a proper burial of their dead. He said losses and suffering in the battle were a source of grief but the tragic battle was also exemplary for giving rise to strong friendships and solid alliances replacing historical hostilities. "Turkey and Great Britain are now NATO allies trusting each other more, and it is an important sign of reconciliation," Carleton-Smith said.

Today, thousands of Australian and New Zealander visitors, including descendants of fallen soldiers, will hold a dawn service at the site where soldiers first landed 104 years ago. A separate ceremony was held yesterday at monuments dedicated to French and British soldiers yesterday, and visitors left flowers on the graves of the fallen soldiers.