Turkish Red Crescent to extend a helping hand in Ramadan 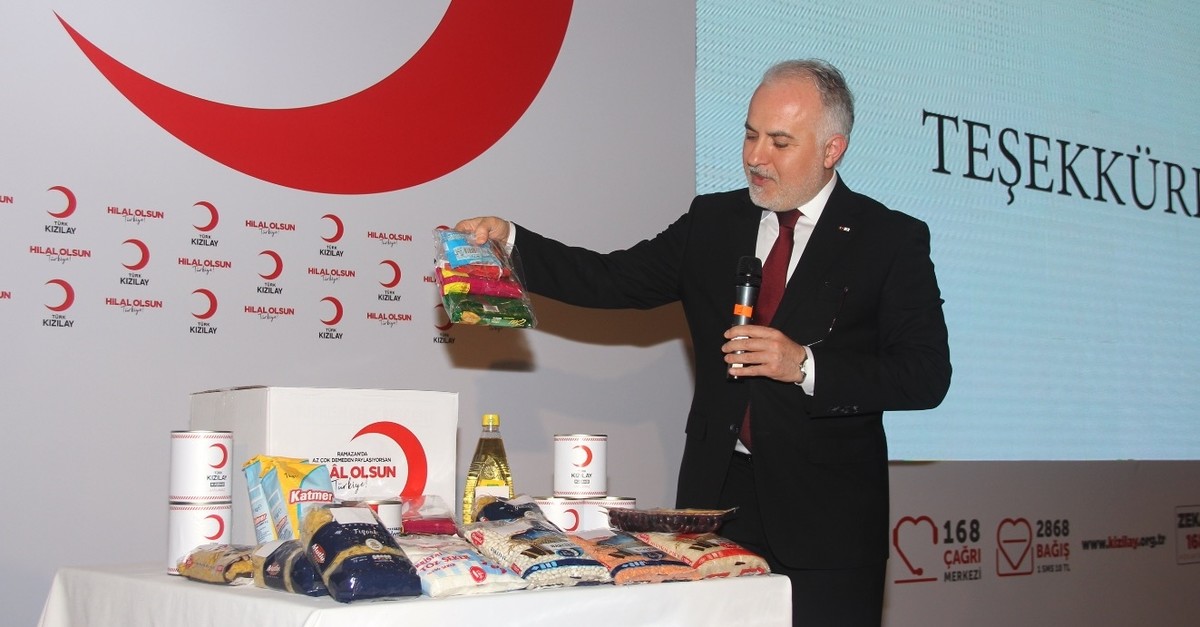 Turkey's leading charity, the Turkish Red Crescent, unveiled its humanitarian projects for the upcoming holy month of Ramadan yesterday. The charity's president, Kerem Kınık, said they will reach out to about 15 million people in Turkey and the world as part of their aid campaign

The Muslim fasting month of Ramadan starts next week. The month is also dedicated to helping the poor and Ramadan will be marked with international humanitarian projects by Turkish charities. The Turkish Red Crescent, the country's most renowned humanitarian aid organization, is at the forefront of Turkey's aid endeavors around the world.

Unveiling its projects for Ramadan, the charity introduced its campaign for the month at a press conference by Turkish Red Crescent President Kerem Kınık in Istanbul yesterday. Kınık outlined the work the charity will undertake in the holy month and said they would reach out to about 15 million people in need in Turkey and other countries. The campaign will focus on poor families in Turkey more this year.Kınık said the Red Crescent's "sharing campaigns" have been a tradition in Ramadan, "a month to make impoverished families smile." He added that they reached out to 9 million people in Turkey and 1 million abroad to deliver humanitarian aid in last year's Ramadan month. This year, the Red Crescent will be present in 39 locations in 37 countries for aid delivery. The charity also added New Zealand to its Ramadan destinations after the brutal massacre of 50 Muslims in two mosques in Christchurch. Kınık said they would visit Muslims there "to share their pain." A total of 37 countries, including Bosnia-Herzegovina, Kyrgyzstan, Indonesia, the Maldives, Afghanistan, Palestine, Syria, Somalia, Djibouti, Senegal, South Sudan and Suriname, will receive aid this year.

The charity will host iftar dinners for about 1 million people across Turkey this Ramadan. Iftar is the time when the daylong fast ends and traditionally, dinner tables are set on the streets by municipalities and charities for those who cannot afford food and those late to break their fast. Kınık said they will deliver food packages to 400,000 households in Turkey and will use meat donated to the charity during last year's Eid al-Adha, or the Muslim festival of sacrifice, where the faithful slaughter sheep and cows and deliver portions of their meat to the needy. The Red Crescent cans the meat and regularly delivers it to poor families. Kınık says 400,000 is the minimum number, and they hoped for more deliveries if donors increase their contribution during the month.

The Red Crescent will also serve as an intermediary in donation of zakat to 150 households and runs a fitr campaign for those seeking to donate money to the needy. Zakat is an obligatory donation to the poor for every Muslim who can afford it. Fitr is similar to zakat, and Muslims are required to give it to the poor at the end of Ramadan.Other Turkish charities will also launch humanitarian campaigns during the month of Ramadan. The Federation of Associations That Value Humanity (İDDEF), for its part, will reach out to the needy in 33 countries from Africa to the Balkans. The Istanbul-based charity will both hand out fitr and zakat from donors to the poor and host iftar dinners in Kosovo, Burkina Faso, Guinea, Mexico, Kyrgyzstan and Philippines. The International Cooperation and Aid Association will host iftar dinners and suhoor meals (last meal before the start of daily fast) in two soup kitchens in Ethiopia and deliver packages with food for one month to 1,920 families in the country. The Humanitarian Aid Foundation aims to reach out to 3 million people in 120 countries throughout Ramadan. It will deliver food packages, clothes and cash for the impoverished households, the orphans and the displaced. The charity's campaign focuses on Syria, Sudan, Yemen, Palestine, Bangladesh, Iraq and Myanmar.