May 1 Labor and Solidarity Day marked throughout Turkey with rallies, meetings 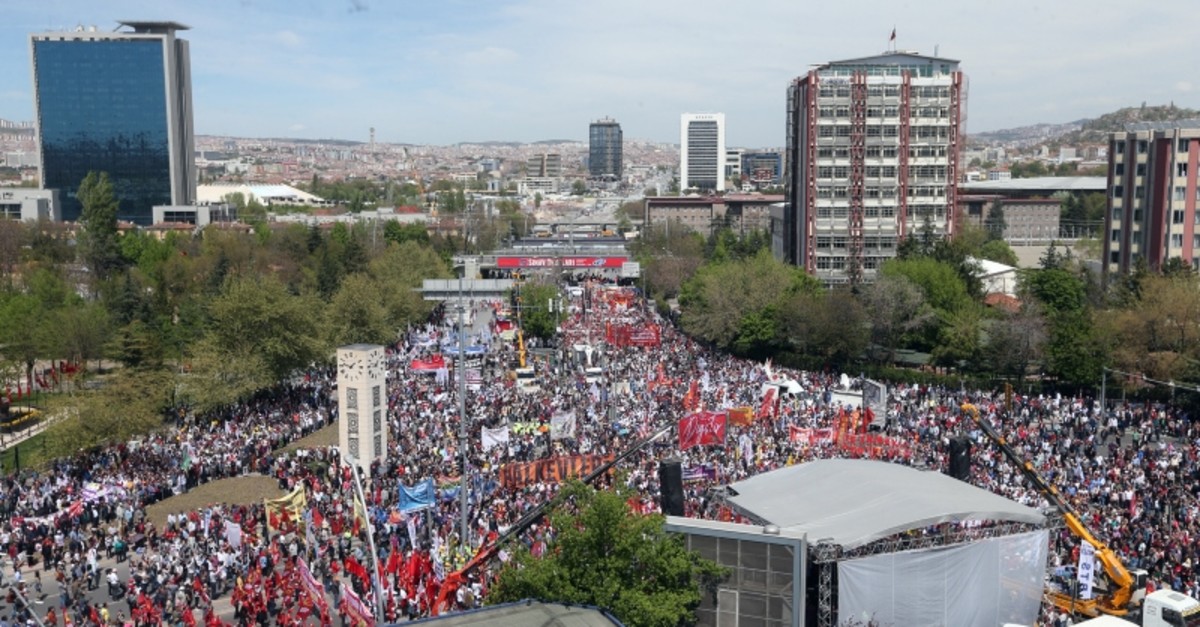 Politicians, trade unions and workers across Turkey marked the International Workers' Day, also known as May Day and celebrated in the country as a national holiday named "May 1 Labor and Solidarity Day."

Workers from labor unions rallied across the country, singing songs and chanting slogans for workers' rights. Celebrations were largely uneventful save for minor disturbances in Istanbul, unlike Labor Day events marked with violence in past years.

Joint rallies were held in Anadolu Square in capital Ankara and Gündoğdu Square of western Turkey's Izmir, in addition to a number of cities and towns.

Participation was high throughout Turkey amid nice weather, with trade unions bolstering their presence using the chance to voiced their objection to the proposed severance pay reform by the government.

However, concerts and music broadcast were canceled and minute of silence was observed in most venues due a traffic accident killing five workers who were on their way to May Day celebrations in Şanlıurfa​. Condolences poured in for victims and President Recep Tayyip Erdoğan was among those who phoned the Hak-Iş and Memur-Sen presidents to offer condolences.

"I congratulate the Labor and Solidarity Day of our worker and laborer brothers who play an important role in the growth and development of our country with their labor and sweat," Erdoğan also wrote in a message posted in his Twitter account.

Erdoğan said they always worked to find solutions to workers' problems under successive administrations of the ruling Justice and Development (AK) Party. "We implemented many measures and programs to increase employment and decrease the rate of unemployment, and workers made significant gains from wages to social rights. We continue working to solve their problems and improve their lives, heeding democratically voiced demands of workers. The first step to a solution is our worker brothers and sisters voicing their rightful demands on democratic platforms," he said.

"I commemorate May 1 Labor and Solidarity Day with belief in the future that unemployment is resolved, business crime ends, poverty and inequality in income distribution is corrected; and a future that is based on production and job opportunities," Kemal Kılıçdaroğlu tweeted.

"I would like to commemorate May 1 Labor and Solidarity Day for all of our workers who work and produce with labor and sweat, contribute to the development of our country and I hope this day will consolidate our unity and solidarity," Presidential Communications Director Fahrettin Altun wrote.

Istanbul's Taksim Square, witnessing scuffles between the police and left-wing groups each year, was again declared off-limits to May Day celebrations citing security concerns. Roads leading to the square were blocked Wednesday with the police allowing small delegations from trade unions place wreaths on republic monument. Still, small groups chanting "May Day is Taksim and it cannot be banned," attempted to break the blockade. More than 30 people were detained.

May Day, first emerged as an event commemorating the labor of workers worldwide on May 1, 1886, when a group of workers in the U.S. held a massive strike for an eight-hour workday.

Since the 1890s, May 1 has been celebrated as International Workers' Day in many countries. In Turkey, the first mass May 1 celebrations occurred in the 1910s during Ottoman era in events held mainly by cotton, grape and port workers in Istanbul, Izmir and Thessaloniki. It was celebrated in Ankara in 1922 amid close ties with the Soviet Union during the War of Independence and officially celebrated in 1923. From 1925 to 1976, Labor Day celebrations were officially banned and a new public holiday named Spring and Flower Day was introduced.

In 1977, the first mass Labor Day celebrations in decades took place in Istanbul's Taksim Square, attended by hundreds of thousands of people, but ended tragically when unidentified assailants opened fire on the crowd, leading to the deaths of 36 people amid gunfire and the subsequent stampede. From 1979 on, a ban was introduced on May Day celebrations in Taksim, which caused the square and its surrounding areas to become a clash zone between security forces and mainly left-wing groups each year.

The military regime of Sept. 12, 1980, coup d'état banned Labor Day celebrations and removed May 1 as a national holiday. They were restored again in 2009, and the square was open for Labor Day celebrations in 2010. Rallies in 2010 were peaceful, but after the ban was reinstated in 2012, protests again turned violent. Taksim Square remained off-limits to mass rallies for fear of a repeat of the 1977 incident and riots by supporters of terrorist groups, which exploited the Labor Day celebrations to stage riots in the past.