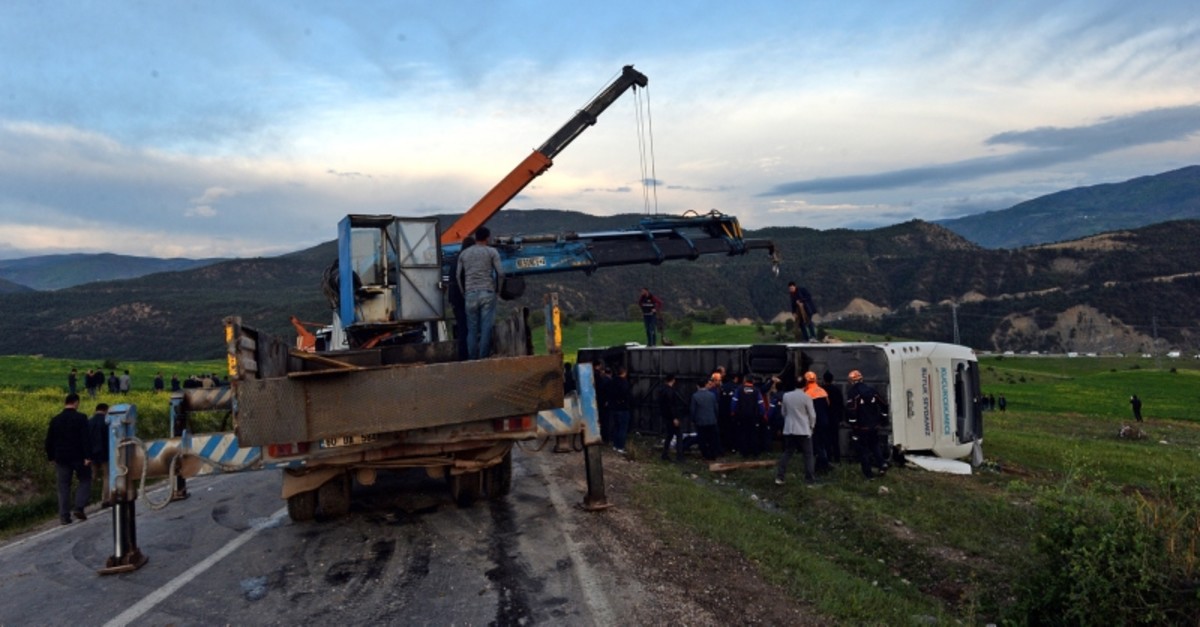 At least 11 people were killed and 86 others were injured in separate accidents involving buses in different parts of Turkey on Friday and early Saturday, once again highlighting to the importance of road safety in the country one month ahead of the week-long Ramadan holiday.

The deadliest accident occurred late Friday as a bus carrying attendees to a funeral ceremony in northern Tokat province veered off the road in Reşadiye district, killing seven people and injuring 30 others, Governor Ozan Balcı said.

The bus, registered in the inventory of the Küçükçekmece district municipality in Istanbul, was carrying people from the city to attend the funeral ceremony in Elmacık village. Two drivers of the bus were detained by gendarmerie units.

In the early hours of Saturday, an intercity bus rolled into a ditch in southern Adana province, killing two people and injuring 29 others. The bus was carrying passengers from southeastern Şanlıurfa province to southern Mersin province, and rolled over after exiting the Mersin-Gaziantep highway.

Municipal search and rescue teams and local units of the Disaster and Emergency Management Authority (AFAD) were dispatched to the accident scene to rescue the passengers stuck inside the bus.

Meanwhile in central Konya province, one person was killed and 24 others were injured when a service bus carrying workers to a factory in the city's organized industrial zone collided with a truck on Aksaray highway Saturday morning.

The injured workers were transferred to nearby hospitals. The driver of the service bus has reportedly fled the scene after the crash.

A crash involving two automobiles killed one person and injured three others in Fethiye district of southwestern Muğla province. The deceased was heavily injured in the crash and rushed to Dalaman State Hospital but could not be saved despite all efforts.

Amid a decreasing trend in the number of accidents per vehicles and the ratio of accidents resulting in deaths and injuries, road safety remains poor in Turkey despite efforts by authorities to improve the infrastructure, raise awareness and impose strict controls and fines. In 2018, 3,073 people were killed and 310,109 others were injured in 428,074 traffic accidents throughout the country, with reckless driving, negligence of rules and speeding being the main causes of accidents.

The latest tragic accidents came as a stern warning ahead of the Ramadan Bayram (Eid al-Fitr) to be observed between June 4 (Tuesday) and June 6, which has been declared a week-long holiday for the public sector. Traffic accidents and other road incidents happen with increased frequency before and after Muslim holidays in Turkey, when a large number of holidaymakers travel en masse to vacation resorts or to their hometowns from big cities like Istanbul. Millions of Turks are again expected to hit the roads between May 31 and June 9.

In last year's Qurban Bayram (Eid al-Adha) holiday covering a 9-day period in August, 147 people were killed and 702 others were injured in 192 accidents throughout the country.
RELATED TOPICS