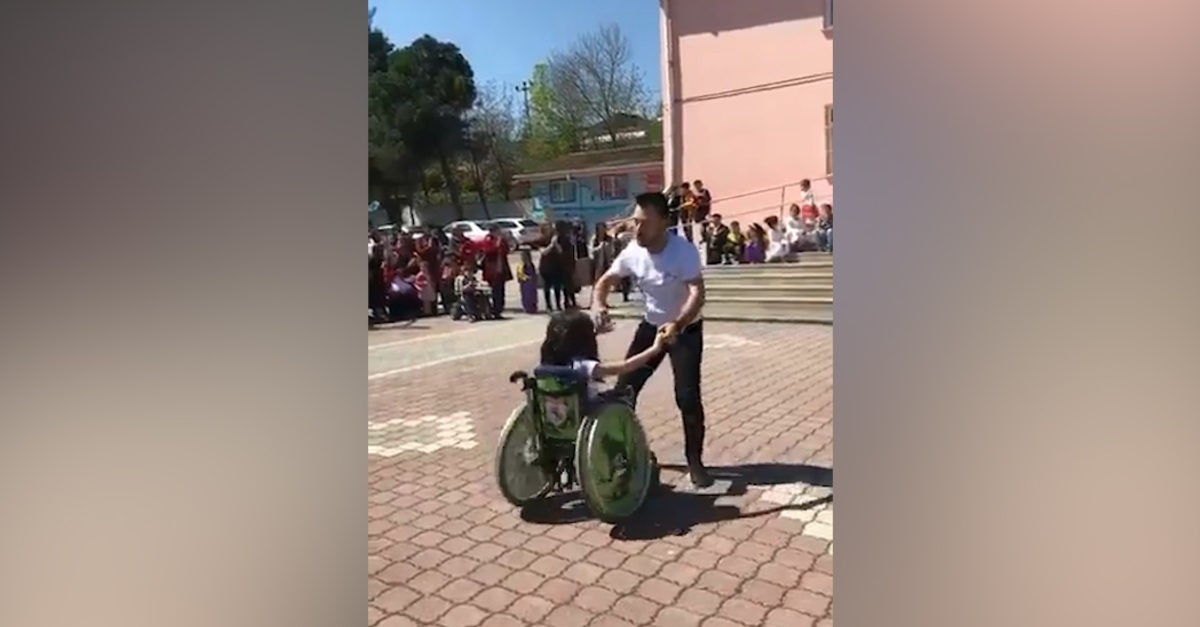 A Turkish teacher and his wheelchair bound student, who became an inspiration nationwide with their choreographed dance performance, have once again stolen the hearts of their audience and gone viral on social media.

Çağlar Özdemir, a teacher at the 75. Yıl Secondary School in northern Samsun province's Ilkadım district, has warmed the hearts of viewers around the world with a dance he created with one of his young students, a congenitally disabled girl.

In the clip, the teacher is seen guiding 10-year-old Zeynep Uysal into the center of the schoolyard, taking her by the hand and spinning her around to the music.

Without missing a beat, the two move in unison, with Özdemir as energetic as ever as the rest of the school looks in awe, eagerly clapping and cheering them on.

The pair performed their perfectly-choreographed dance routine as part of April 23 National Sovereignty and Children's Day celebrations at the school.

A few years back, Özdemir had again performed in front of the entire school with wheelchair-bound Uysal, earning the praise of many for putting his heart into his work and going above and beyond to educate his students.

His heartwarming performance earned him the nickname "Çağlar öğretmen" (which means teacher in English), becoming a trend topic (TT) on Twitter.

National Sovereignty and Children's Day, marking the opening of the Grand National Assembly of Turkey in April 23, 1920 during the War of Independence, is a unique occasion devoted almost a century ago to children by modern Turkey's founder Mustafa Kemal Atatürk. On this festive day, youngsters from around the world bond with their Turkish peers and have fun, and every grade school across the country organizes festivities with students performing plays and dances. Children also get to take over the seats adults occupy for a day, giving symbolic orders as the president, prime minister, mayors and governors, as well as police chiefs and military commanders.