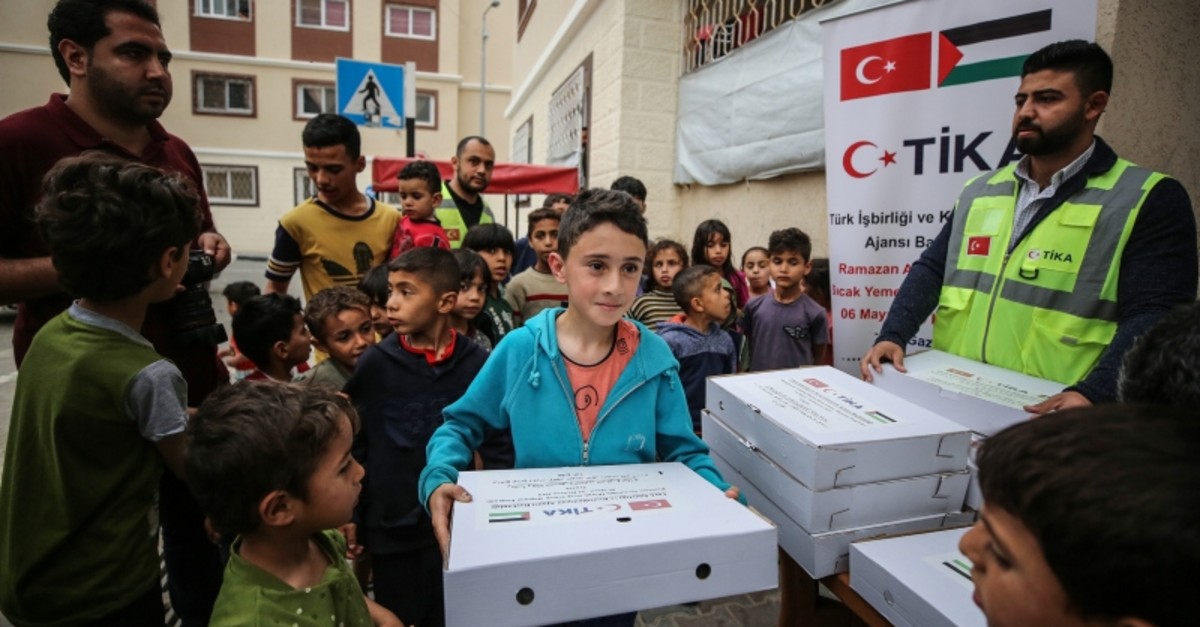 Palestinians in the Gaza Strip

Turkish Cooperation and Coordination Agency (TIKA) said Tuesday it will provide iftar meals to 1,000 people in the Gaza Strip every day.

On Monday, the first day of Ramadan, TIKA served a warm meal to about 1,000 needy families in southeastern Gaza, in the village of Hajar al-Dik.

The food aid to Gaza comes at time of heightened tension between the blockaded strip and the Israeli government. Over the weekend, Israeli airstrikes on the Gaza Strip killed at least 25 Palestinians, including two pregnant women and two infants, and injured more than 100 others.

Hamas, the Palestinian group that governs Gaza, said Monday that a cease-fire deal had been brokered by Egypt, along with officials from Qatar and the U.N.

A total of 3,000 refugees in the Jamtoli camp and 4,500 others in Balukhali and Gundam refugee camps received the aid.

Speaking to Anadolu Agency, IHH representative in Bangladesh Andulhakim Mahmout said, "After the massacres in 2017, this is the second Ramadan that Rohingya Muslims are observing in these camps. There is a significant decrease in the aid coming here this year, although many Muslim countries were providing aid in previous years. We, as IHH, will continue to be a bridge between Rohingya Muslims and philanthropists in Turkey."

There are 1.3 million Rohingya Muslims living in the Kutupalong and Balukhali refugee camps in Bangladesh.

International aid agencies have called for more support for Rohingya refugees as the holy month of Ramadan begins.

As many as 91 teams of IHH will operate in 120 countries and regions including Syria, Yemen, Afghanistan, Somalia, Sudan, the blockaded Gaza Strip, Arakan and East Turkestan, Bangladesh and Iraq during the Ramadan, said a statement issued by the charity.

The charity will also distribute clothes to 67,920 orphans and children in 43 countries on the Eid al-Fitr," the holiday at the holy month's conclusion.

In Yemen, the Turkish Red Crescent is marking Ramadan by distributing iftar meals to poor families and refugees in southern Aden province.

According to Aydın, a total of 3,000 meals will be delivered to refugees coming from Al-Hudaydah and Taiz province and to local orphanages in Aden.

Yemen has been wracked by chaos since 2015, when a Saudi-led military coalition launched a devastating air campaign against Yemen's Houthi rebel group.

Since then, thousands of people are believed to have been killed in the conflict, while the UN has warned that as many as 14 million Yemenis face the specter of starvation.

Since the conflict began, Turkey has been a major contributor of humanitarian aid to the war-weary country.