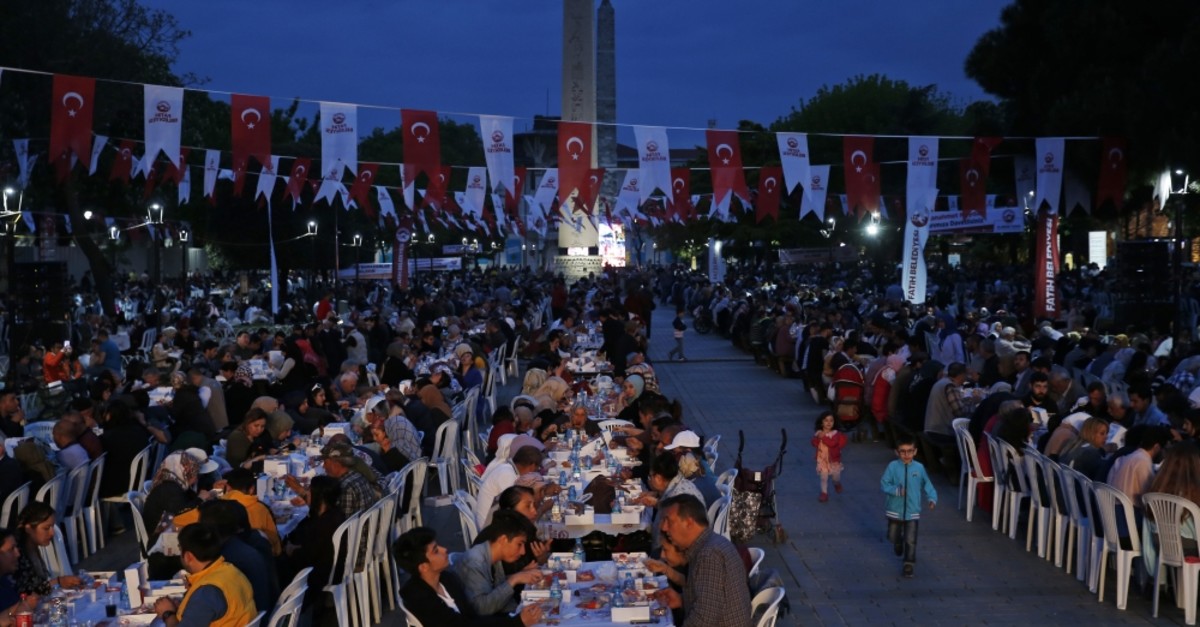 Muslims across the world had their first iftar dinner to break their daily fast on Monday evening on the occasion of the holy month of Ramadan. Some took to the streets to share dinner tables with others, while charities delivered free meals to the needy

Ramadan, a Muslim holy month during which the devout spend fasting daily, started in Turkey on Monday and the end of first day of fasting was an occasion for unity. Iftar dinners, which the faithful have to break their fast, marked a time of togetherness and sharing for many. Street iftar dinners, a once-a-year opportunity, brought together people of all ages gathered around the tables patiently waiting for the Islamic call to prayer, the adhan, to break their fast.

The highlight of outdoors iftar dinners in Istanbul was the one at Sultanahmet Square. Some 15,000 people converged around tables set up across the square, which is surrounded by the city's iconic landmarks like the Sultanahmet (Blue) Mosque and the Hagia Sophia.

As the clock struck the time for evening adhan, a cannon brought in by an artillery unit of the Turkish military fired blanks, to repeat a tradition dating back to the Ottoman era, to mark the time to break the fast.

The dinner, jointly organized by the local municipality, the governorate and the city's chamber of commerce was one of several street dinners held across the city.

Save for a few countries that follow a different interpretation of the Islamic calendar, most Muslims started fasting on Monday for Ramadan, waking up some time between midnight and dawn for the suhoor meal. They take a religious vow before the sun rises every day and abstain from eating and drinking anything until sunset.

Ramadan is an opportunity for the faithful to get closer to Allah, who promises additional blessings in the Muslim holy book Quran for those undertaking the Ramadan fast, one of the pillars of the religion. It also gives a chance to Muslims to reflect on their lives and show gratitude for all they were given, from food to water, according to the Islamic belief.

Abstaining from eating and drinking, the devoted are reminded of those in need, such as low-income households. The month is an occasion for charities to set up iftar dinners for the needy.

The Turkish Red Crescent offered this Ramadan's first iftar dinner in Idlib in northern Syria. Idlib, held by the opposition fighting against Bashar Assad's forces, is one of the most volatile areas in the war-torn country and houses both citizens displaced by fighting elsewhere in Syria and its own population, which face hunger and poverty amid the ongoing conflict. The Red Crescent will serve meals to more than 7,000 people in Idlib every day throughout Ramadan. The charity will also deliver iftar meals to people living in 15 orphanages and six camps for the displaced.

Similarly, the charity started its first traditional iftar dinner on Monday in Yemen's Aden and will serve meals every evening throughout Ramadan in the conflict-ridden country. Some 500 occupants of al-Mahram refugee camp in Aden were guests of the iftar dinner. They were in the camp after fleeing clashes in Hodaida, leaving everything behind.

The Turkish Red Crescent was also behind an aid campaign in Yemen where it delivered 11,000 food packages to families in need, students and internally displaced individuals prior to Ramadan. Yemen has succumbed to political instability and a slow-brewing conflict between Houthis and a government propped by a coalition of Gulf countries. The conflict, ongoing since 2014, has led to a crisis in the country, leaving millions exposed to hunger and disease and without homes.

The Red Crescent, the country's most renowned humanitarian aid organization, is at the forefront of Turkey's aid endeavors around the world. It will reach out to about 15 million people in need in Turkey and other countries this month with its "sharing campaigns." The charity, which will be present in 39 locations in 37 countries for aid delivery this Ramadan, offers iftar dinners, monthly food packages and cash to families in need.

The Turkish Cooperation and Coordination Agency (TİKA), a state-run development aid agency, also reaches out to the needy on the occasion of Ramadan. TİKA will deliver hot iftar meals to about 1,000 different households every day of the month in Gaza, the Palestinian city suffering from an Israeli blockade. Thousands of food packages are also being delivered to families in the Gaza Strip.