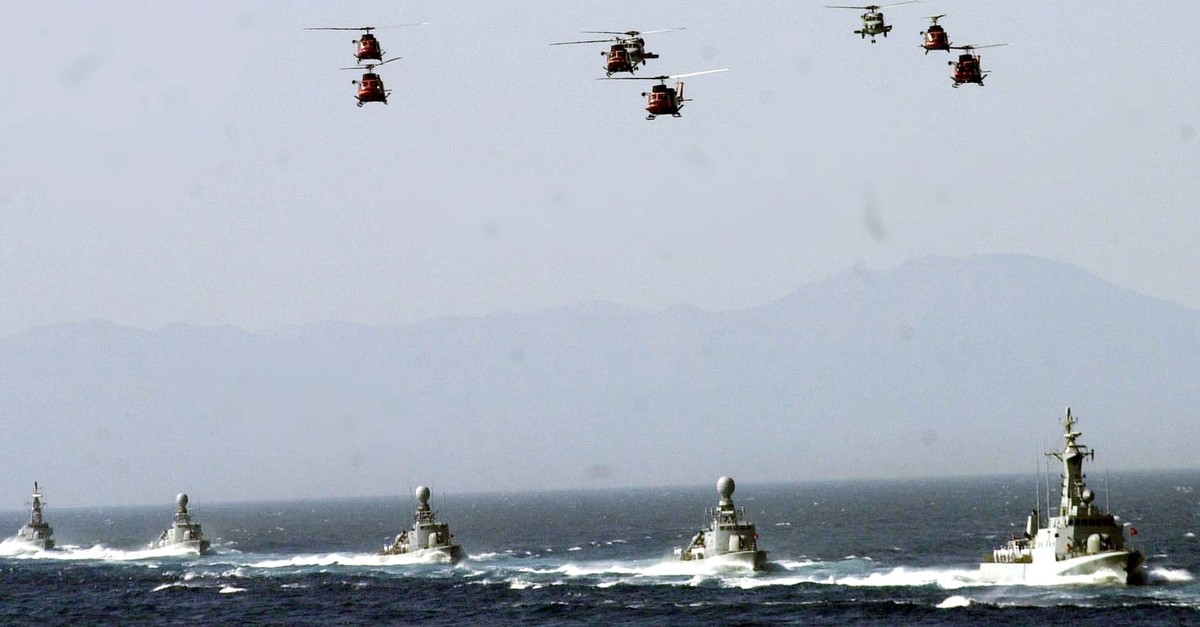 Turkish battleships accompanied by helicopters move in the 2003 edition of Sea Wolf exercise.
by Daily Sabah May 10, 2019 1:40 am

Turkey is looking to expand its naval drills in order to boost its presence in the Black Sea, Aegean Sea and the Mediterranean Sea. The Sea Wolf 2019 military exercise, the largest annual drill of the Turkish Naval Forces will kick off next week. The country is also mulling an international drill in the Mediterranean, where it faces multiple security threats, especially toward its oil and gas exploration attempts.

The Sea Wolf exercise, to be held between May 13 and May 25, will be one of the most comprehensive naval drills of the year. It will be held simultaneously in the Black Sea, the Aegean Sea and the Mediterranean Sea, with the participation of 131 vessels, 57 aircraft and 33 helicopters. Along with the naval forces, other military units, including the Land, Air and the Special Forces, as well as the Coast Guard Command will join the exercise. Some 25,900 officers will take part in live-fire exercise aiming to bolster the readiness for operations for Naval Forces. The exercise will also be an opportunity for a show of force and diplomacy for Turkey as 85 vessels that take part in the exercise will visit 33 ports in Turkey and abroad in the last stage of the exercise and they will be open to public visit.

Meanwhile, a Turkish newspaper reported that the country was in talks with other countries for the Mediterranean Shield, a naval security exercise organized by the Turkish military, to be open to other countries.

Mediterranean Shield, conducted every year since 2006, aims to boost preparedness to maritime security threats. Turkish language daily, Yeni Şafak reported that Turkey plans to sign a memorandum of understanding with Albania, Azerbaijan, Algeria, Georgia, Libya, Lebanon, Pakistan, Tunisia and Jordan to have them included in the exercise.

The countries littoral to the Mediterranean and with commercial, strategic interests in the sea will share information and experience for Mediterranean Shield although they will not be required to send naval units, Yeni Şafak reported. Turkey previously went international with a similar military exercise in the Black Sea.