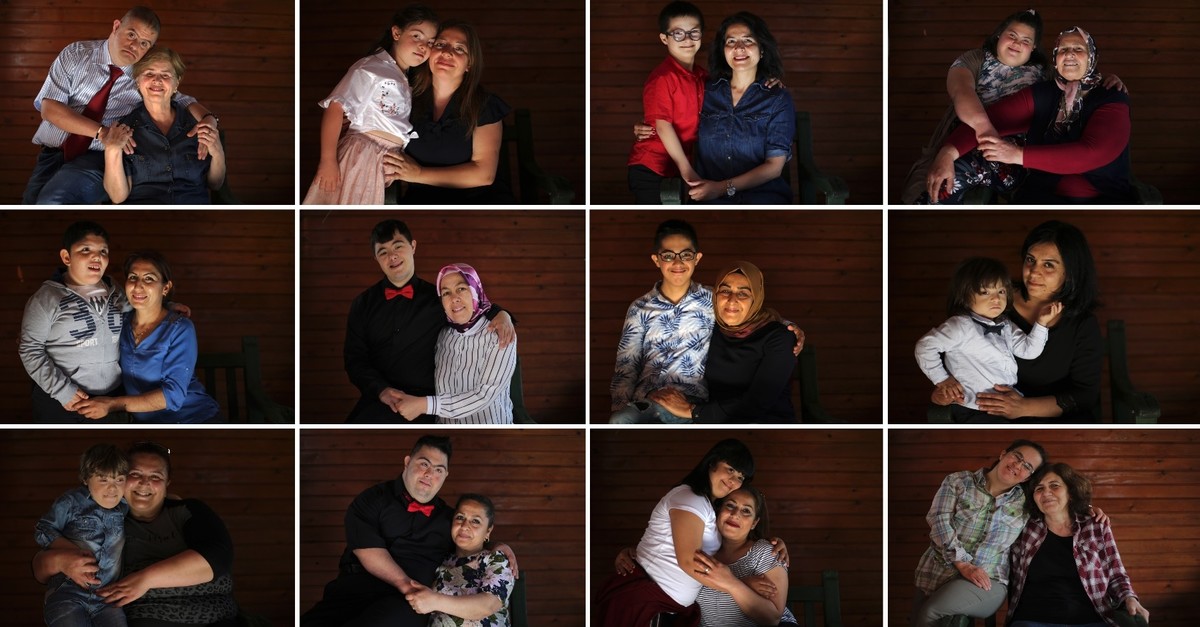 Mother's Day, observed Sunday, resonated with stories of women who have dedicated their lives to their children, especially those battling lifelong diseases

Mother's Day, celebrated Sunday, is a day for recognizing mothers with outstanding stories of devotion. Motherhood itself is the ultimate sacrifice for women, starting with risking their lives to give birth. Some women, nevertheless, take this dedication to a whole new level when their children suffer from lifelong diseases with little chance of recovery.

Turkey is home to about 70,000 people with Down syndrome, a genetic disorder that, apart from slight physical changes in facial features, causes intellectual disability. Fatma Kamurbay, 38, is the mother of a child with Down syndrome. The mother of two was pregnant with her first child when doctors told her about his disorder. "I never thought of having an abortion," Kamurbay says, as she embraces her son Buğra, now 14. Her other son was diagnosed with leukemia, and Kamurbay feels overwhelmed, but she is not giving up. "[Buğra] could not walk, speak or hold his head straight for seven years, and I always tried to help him. I've waited so long to hear him call me 'mother' or take a step without me assisting him," she says. 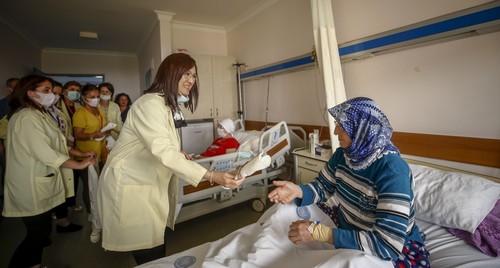 "Yellow Angels," themselves mothers, visited mothers at the hospital they volunteered at and gave them gifts, May 12, 2019.

Servet Erdoğan found out late about her daughter's disorder. Ceren was born one year after Erdoğan's other child, a 4-month-old boy, who died of another disease. "I knew something was wrong with her when I touched her for the first time after birth. She was like a miracle for me because she was born after the death of my son. I knew she was different, that she'd suffer. I felt it, but I couldn't name it. It was difficult at first to accept, but things changed over time. She now adds color to my life, a joy of our home," Erdoğan says as she holds hands with Ceren, now 13. The young girl's growth was stunted due to the disorder, but she overcame the odds to learn dancing and took up sports. "I did everything so she'd be happy," Erdoğan said about her daughter.

Fadime Bozkurt, 49, ignored doctor's warnings and went ahead with her third pregnancy, and had a boy with Down syndrome. "It has been 15 years since the birth of my last child. [Serdar] is an angel God sent to me. I am happy to be his mother. We are one big happy family with a child with Down syndrome. I never looked back when I was pregnant. It was God's blessing, giving me a child after all these years again. Doctors told me he wouldn't survive when he was born, but he grew up to be 14," she says.

I JUST COULDN'T ACCEPT IT AT FIRST

Zeynep Karaoğlu was a chemist before Koray was born 35 years ago. Once she found out that her son was diagnosed with the disorder, she decided to quit and devote her life to Koray's care. "I didn't know what Down syndrome was when he was diagnosed. I didn't know what to do. He was 40-days-old when I took him to the hospital for a fever and it was there, from a note by doctor on the prescription, I found out that he had Down syndrome," she recounts her early days with her son. "I checked books, visited countless doctors, I did everything I could so I could learn more about it. I just couldn't accept it at first," Karaoğlu adds. This was years ago, she adds, now leading a happy life with her son who still needs her for his care.

A worse case for a mother would be not knowing what their child was going through. This was what happened to Aysha Halo Ajouri before she came to Turkey. A refugee of the civil war in her homeland Syria, Ajouri desperately sought a name for what her son Hussein was suffering. In a country with crumbling health care, it proved impossible, and it was only after the family took shelter in Turkey that she found out 6-year-old Hussein suffers from brittle bone disease. Medically known as osteogenesis imperfecta, the disease causes one's bones to break easily, severely restricting their ability to move. The Ajouri family, who hail from Syria's war-torn Aleppo, was separated after the war. Her husband arrived in Turkey earlier, but it took a lengthy journey for Aysha Halo to reach the country last year. Hussein was taken to a clinic where doctors discovered his bones were deformed and more brittle than ever due to difficulties he encountered on his journey to Turkey. He was diagnosed with the disease in February and is currently undergoing treatment in the company of his mother. Aysha Halo does not leave him for a moment, always prays by his bedside, looking forward to the day that her son can walk like other children. "He was very frail. His feet, arms were broken a few times while we were coming here. Doctors told me it would take a long time for him to recover. May Allah protect him," Ajouri says. "Doctors told me that he won't recover at least for another 15 years, but he can stand up. He can't walk, but he can stand up, and I believe this is an answer to my prayers for his recovery," she told Anadolu Agency (AA).

MOTHER RISKS LIFE TO SAVE HER DAUGHTER

It isn't the diseases that the mothers help their children fight. Sinem Aydoğdu, who lives in the central city of Kırşehir, was recognized as mother of year by a local association for her unflinching attempt to stop a feral dog from mauling her daughter. Aydoğdu made headlines last October when security camera footage captured the moments of Aydoğdu saving her daughter, 8-year-old Hatice, from the attack of a pit bull. The girl was walking to a school bus outside her home when the dog appeared out of nowhere and attacked her. Aydoğdu bravely fought to save her daughter from the tough grip of the dog and both sustained injuries. "Any mother would do the same," Aydoğdu said as she was given a mother of year award. "It is all about maternal instinct. When I heard her screaming outside, I dashed downstairs. I saw the dog biting her head and trying to bite her stomach too. She'd be worse if I had come a few seconds later. God protected her," she says.

And then, there are mothers who work for the care of others. In the southern city of Antalya, 20 volunteer mothers, called "Yellow Angels," have devoted their lives to young patients at a hospital for more than two decades. The Yellow Angels, named for the color of the uniform they don, work in shifts to offer assistance to patients at Akdeniz University Hospital.

The group was founded in 1997 by women aiming to boost the morale of patients with serious conditions and once they were approved by hospital administration, they have been daily visitors to the hospital. They comfort patients and their families who spend weeks or months at the hospital and serve as an informal service for any nonmedical problems they might have. They visit every ward, but wards with young patients are the places they frequent most. Önay Köroğlu, head of the Yellow Angels, says they come to the hospital every morning and work in shifts. "We try to help patients and their families as much as we can. Sometimes, people cannot afford even their basic needs, and we raise funds for them. We are here for moral support, to help people who cannot take care of themselves while fighting with diseases," she says. Demet Katırcıoğlu joined the group nine years ago while she was a mother of a patient herself at the hospital.

"My son was undergoing leukemia treatment and was in intensive care when I met them. I was impressed with the work they've done and told myself I'd be like them if God gives me my son back. He recovered, and I made good on my promise," Katırcıoğlu says. Being a family member of a patient works to her advantage, she says. "I know what people feel here, and I can communicate better with them. I try to comfort them, to give them hope," she adds. Ferda Ülker, a hospital administrator, says the Yellow Angels have been like a bridge between hospital staff and patients. "Whenever a patient needs something [nonmedical], the Angels contact us. They hear about their problems and raise awareness for the conditions of patients and their families. People are so accustomed to them, and they are really liked by the patients and their families," Ülker says.