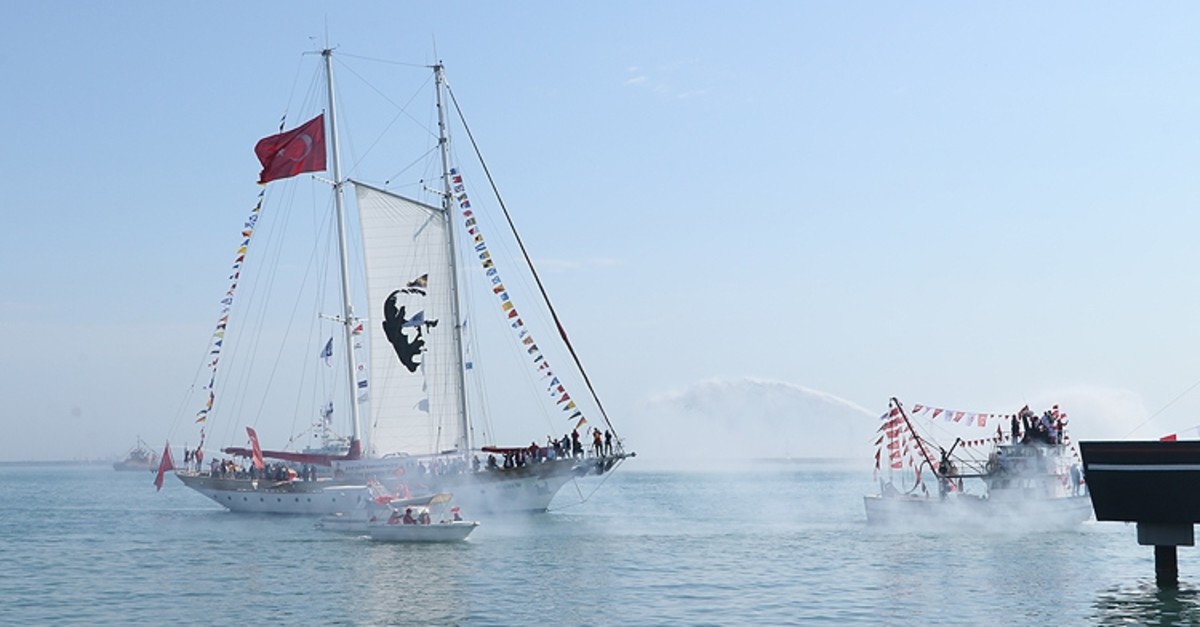 Turkey on Sunday marked the centenary of Independence Day, which marks the beginning of Turkey's War of Independence and the emergence of modern Turkey, in a series of events and celebrations across the country.

May 19 is a milestone in Turkish history as it is the day when Mustafa Kemal, later to become Mustafa Kemal Atatürk, arrived in the Black Sea city of Samsun from Istanbul to organize the war that saw the remnants of the Ottoman Empire transformed into modern Turkey four years later.
Atatürk dedicated May 19 to the youth of the Turkish nation as Youth and Sports Day, a national holiday that sees young people stage sporting and cultural activities with official ceremonies across the nation.

Youth and Sports Minister Mehmet Muharrem Kasapoğlu laid a wreath at Anıtkabir, Atatürk's mausoleum overlooking the capital Ankara.
Massive celebrations took place in the Black Sea province of Samsun, with the attendance of President Recep Tayyip Erdoğan, main opposition Republican People's Party (CHP) Chairman Kemal Kılıçdaroğlu, National Movement Party (MHP) Chairman Devlet Bahçeli and a number of high-ranking officials. The celebrations began with events at Tütün Pier where Atatürk set foot after his journey in 1919. In a ceremonial journey, the Piri Reis University Training Ship also arrived in Samsun after leaving Istanbul on Thursday, following Atatürk's route on the way to Samsun.
Erdoğan released a statement to mark the May 19 Commemoration of Atatürk, Youth and Sports Day, in which he described the day as "the first step taken towards freedom and independence."

"May 19 is the day when Mustafa Kemal Atatürk arrived in Samsun and effectively initiated our national struggle 100 years ago. May 19 is the day when the national will, the spirit of unity and solidarity and an unwavering faith revived to eradicate the occupying forces from our land. May 19 is the day when our nation stood back up. May 19 is the first step taken towards freedom and independence," the statement said.
In the statement addressed to youth, the president added: "Dear youth… We believe in you. Today, as was the case yesterday, we stand ready to listen to you to make your demands, expectations and dreams come true and to build a future that will make you proud. Let's join hands and further elevate our country."

The president was also expected to attend an iftar, or fast-breaking meal, with youth in Samsun.

"On the 100th anniversary of the beginning of the national struggle, we are striving to move our [Turkish] Republic to the level of contemporary civilization with the same belief and determination as on the first day," Çavuşoğlu said.

In Istanbul, a concert was held at the Cemal Reşit Rey Concert Hall to mark the event, which was attended by Governor Ali Yerlikaya and other officials, students, and guests.

May 19 celebrations took place not only throughout Turkey, but also in the Turkish Republic of Northern Cyprus (TRNC) and Turkey's missions abroad.
National sportswoman and world record-holding diver Şahika Ercümen also dived in Samsun near Tütün Pier to mark the day.

Meanwhile, Pakistan also congratulated Turkey on the occasion. "The people and the Government of Pakistan express their heartiest congratulations to the brotherly people and government of Turkey on the occasion of Ataturk, Youth and Sports Day," the Pakistani Embassy in Ankara said in a message.
"This day commemorates the glorious struggle of the brave Turkish nation against the forces of colonialism and occupation. We are proud of the sacrifices of our forefathers in support of the people of Turkey in this great endeavor," the statement added.