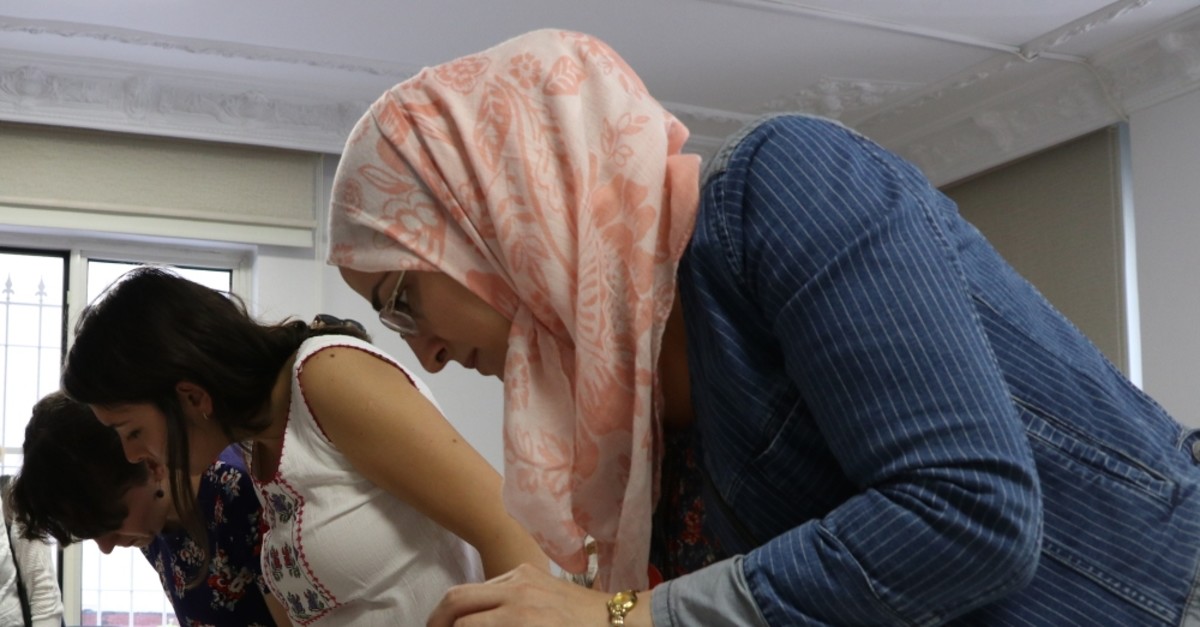 Turkish and Syrian women work together to learn different branches of art at the workshop in Gaziantep.
by daily sabah May 28, 2019 12:04 am

In a city near the Syrian border, Turkish and Syrian refugee women are coming together for a workshop to learn arts and crafts and get closer for the sake of integration

An art workshop in Gaziantep, a Turkish province bordering Syria, brings out the artist inside Turkish and Syrian women and helps them mingle in a country that hosts the largest Syrian refugee community, at more than 3.5 million people.

Syrian and Turkish women come together to learn and create art at the workshop founded by a local nonprofit organization. Called Mutfak/Matbakh (kitchen in Turkish and Arabic), the workshop offers training in painting, sculpture and jewelry design.

Falak al-Ghazzi, a Syrian artist who mentors the participants, told Anadolu Agency (AA) that they wanted to boost dialogue between Turkish and Syrian women and apart from teaching them she "learned a lot" from the Turkish women. "We create together and benefit from the experiences of each other. I don't speak the same language as them, but we get along easily with body language. I am already involved in projects by Turkish associations to bring together Turkish and Syrian women, and I want to do more for more joint projects," she said.

Ayşegül Ateş, the Turkish founder of the workshop, said they started the workshop in 2015 in different branches before switching to their new project, "Women's Unity in Arts," that brought together women from two countries. Ateş says the workshop seeks to increase solidarity between women. "The concept of living together should be empowered. We want more women creating, whether they are filmmakers, chefs or painters. We wanted to make them more visible in society and showcase the strength of women," she said. Currently, 10 Syrian and 10 Turkish women work together at the venue, and Ateş says they wanted to create a "joint production model." "Conveying experience to each other will bolster cultural sharing and encourage more joint productions," she said. "We have no belongings here and any participant can use tools of others to create. Everyone has different stories. A Syrian woman tells the story of her migration to Turkey, for instance, while a Turkish woman tells how she left her hometown for another city," Ateş said.

Turkey is home to the largest Syrian refugee community who fled the ongoing civil war in Syria. A small fraction of refugees live in camps set up by the Turkish state, while others fend for themselves outside the camps; however, integration remains a key challenge especially for women and children. A survey by the Turkish nonprofit organization Women and Democracy Association (KADEM) shows Syrian women find language a main obstacle for integration. The survey shows only one in every four refugee women have Turkish friends. According to the same survey, 94.4% of the women interviewed for the survey did not work in Syria and only 22.7% expressed willingness to join the labor force in Turkey. However, the survey also shows women have a lack of knowledge on how to join the labor force in the country. Turkey introduced a work permit program for refugees a few years ago on a limited basis.