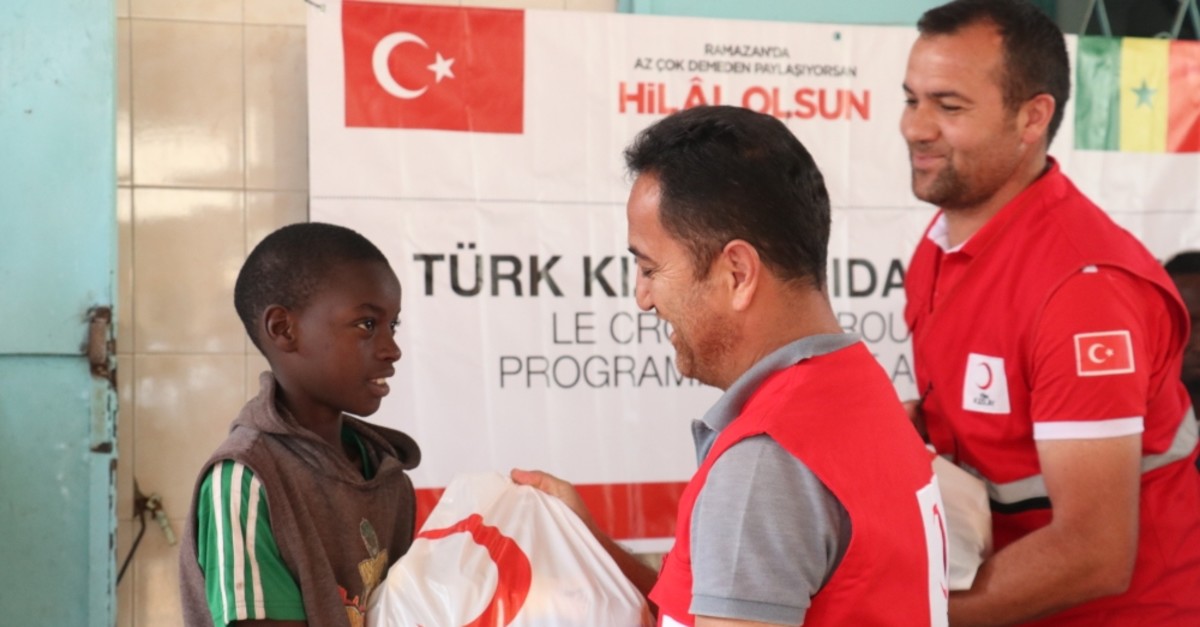 The Turkish Red Crescent, the country's leading charity, reached out to 14.7 million people around the world in the Islamic holy month of Ramadan, delivering humanitarian aid to the poor

The Turkish Red Crescent heals the wound of families in need all around the world with its humanitarian aid campaign on the occasion of the Islamic holy month of Ramadan. The "Let Your Sharing Be a Crescent" campaign by the leading charity saw the distribution of 100,000 food packages to impoverished families in Turkey as well as the delivery of meat to 4.7 million people across the globe. From the remote parts of Turkey to the people of Tanzania, the Red Crescent reached out to everyone with different aid campaigns.

The main campaign will end with next week's Ramadan Bayram, or Eid al-Fitr, which marks the end of the month of Ramadan when Muslims fast from dawn to dusk.

The charity distributes food packages as well as fitr, a form of alms every Muslim who can afford is obliged to pay and zakat, a pillar of Islam that mandates everyone who can afford to donate a fraction of their earnings. The Red Crescent acts as intermediary for fitr and zakat and also serves iftar, or the fast-breaking meal.

The charity so far delivered 400,000 food packages to families in Turkey and abroad. It is currently delivering clothes to families with children for the upcoming Eid. Children dress in new clothes in line with Eid traditions. In total, some 1.6 million people will benefit from the Red Crescent's humanitarian aid delivery.

The Red Crescent has also turned to a new practice to extend the shelf life of its aid. Meat collected from donors during Eid al-Adha, or the Festival of Sacrifice, when Muslims are obliged to slaughter animals and deliver its meat to the poor, were canned by the charity and delivered to some 2.2 million people. Separately, the charity distributed meat to about 4.7 million people.

In Turkey, the Red Crescent made a deal with a leading food company and delivered 100,000 packages containing chocolate and biscuits to children across the country for Ramadan Bayram. It is a long-held tradition to serve chocolate and candy to children going door to door to celebrate Eid in Turkey. The Red Crescent also hosted iftar dinners in 38 countries. On the 15th day of Ramadan designated as Orphans' Day, the charity reached out to about 50,000 orphans around the world for iftar dinners.

In Turkey, the charity serves iftar dinners regularly to disadvantaged people and students. It also served meals to about 30,000 people daily in its 16 soup kitchens across Turkey throughout Ramadan.

The charity aims to collect some TL 50 million as fitr or zakat by the end of Ramadan and reach out to about 150,000 families to deliver the cash aid to each.

Other Turkish charities also carried out humanitarian campaigns during the month of Ramadan. The Federation of Associations That Value Humanity (İDDEF), for its part, reached out to the needy in 33 countries, from Africa to the Balkans. The Istanbul-based charity both handed out fitr and zakat from donors to the poor and host iftar dinners in Kosovo, Burkina Faso, Guinea, Mexico, Kyrgyzstan and Philippines.

The International Cooperation and Aid Association hosted iftar dinners and sahur (the meal before the start of daily fast) meals in two soup kitchens in Ethiopia and delivered packages with food for one month to 1,920 families in the country.

The Humanitarian Aid Foundation reached out to millions in 120 countries throughout Ramadan and delivered food packages, clothes and cash for impoverished households, the orphans and the displaced. The charity's campaign focused on Syria, Sudan, Yemen, Palestine, Bangladesh, Iraq and Myanmar.