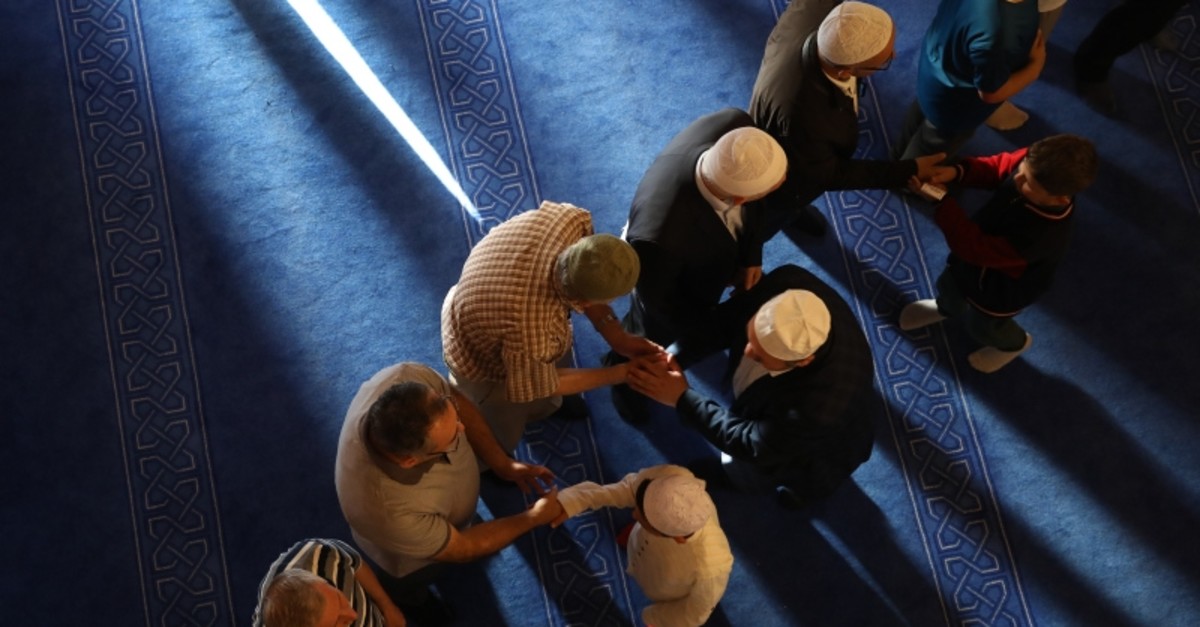 People across Turkey on Tuesday celebrated the first day of Ramadan, also known as Eid al-Fitr, with mosques packed for early morning prayers and people hosting friends and families at their homes.

The Eid al-Fitr holiday, which marks the end of the fasting month of Ramadan, has brought joy particularly to children, who receive candy and presents as part of the tradition.

Thousands of worshippers were given breakfast and soup after Eid prayers in mosques across the country, while tourists flocked to beaches.

Families also visited the graves of their loved ones. Many people chose to travel to their hometowns or coastal cities for the 9-day vacation.

Meanwhile, politicians and influential figures issued celebratory messages for the occasion on their social media accounts.

In a video message published on June 3, President Recep Tayyip Erdoğan said Turkey continued to be the hope for all mankind with its democracy and economy despite terror attacks and traps, and wished a "Happy Bayram" to the Turkish nation.

He praised Allah for another bayram where those estranged reconcile, those separated are united, with hearts full of excitement and refreshed hopes.

Expressing his sadness for his "brothers and sisters" suffering from oppression, calamity and poverty across the world during such times, Erdoğan said he hoped the Turkish nation, the Muslim world and the whole humanity would get to experience a "true bayram" in an air of festivity from now on.

Erdoğan also called Turkish soldiers currently stationed in Iraq's Hakurk for Operation Claw, wishing them a happy bayram, and success in the operation.

Interior Minister Süleyman Soylu, in a written statement for the occasion, said we had come to the end of another Ramadan month reminding us of the sweet excitement and the rush, humanitarian values our century needs with sympathy, to celebrate Eid al-Fitr.

Noting that in our modern world which is revolving around terrorism, violence and migration, Soylu said Ramadan has gone beyond being a solely religious feast, and become sort of an oasis in the desert for humanity and in the spiritual sense, drawing attention to this special and meaningful period. He underscored that it was everyone's desire to crown this beautiful holiday with joy with the spirit of kindness, happiness and peace.

Defense Minister Hulusi Akar paid a visit to Turkish soldiers on the Turkey-Iraq border, and wished them all a happy and healthy bayram after performing prayers with them. Afterwards, he met with locals outside the Derecik Mosque, dishing out candy for children and exchanging greetings with citizens.

Parliament Speaker Mustafa Şentop expressed hope that "Eid al-Fitr will contribute to peace in the world, which is going through hard times, and of humanity, and create a wave love and peace that will spread from the Islamic world."

Former Prime Minister and the Justice and Development Party (AK Party)'s Istanbul mayoral candidate Binali Yıldırım wished many happy bayrams celebrated in unity and solidarity for all in a tweet accompanied by a video of him speaking to the crowd and press after bayram prayers at the Mimar Sinan Mosque in Istanbul's Ataşehir district.

Main opposition the Republican People's Party (CHP) leader Kemal Kılıçdaroğlu shared a video on Twitter with the message "Today is Ramadan, the day of embracing. Today is the day of brotherhood and tolerance. Happy Bayram to us all."