More sinkholes in central Turkey appear amid uncontrolled water use 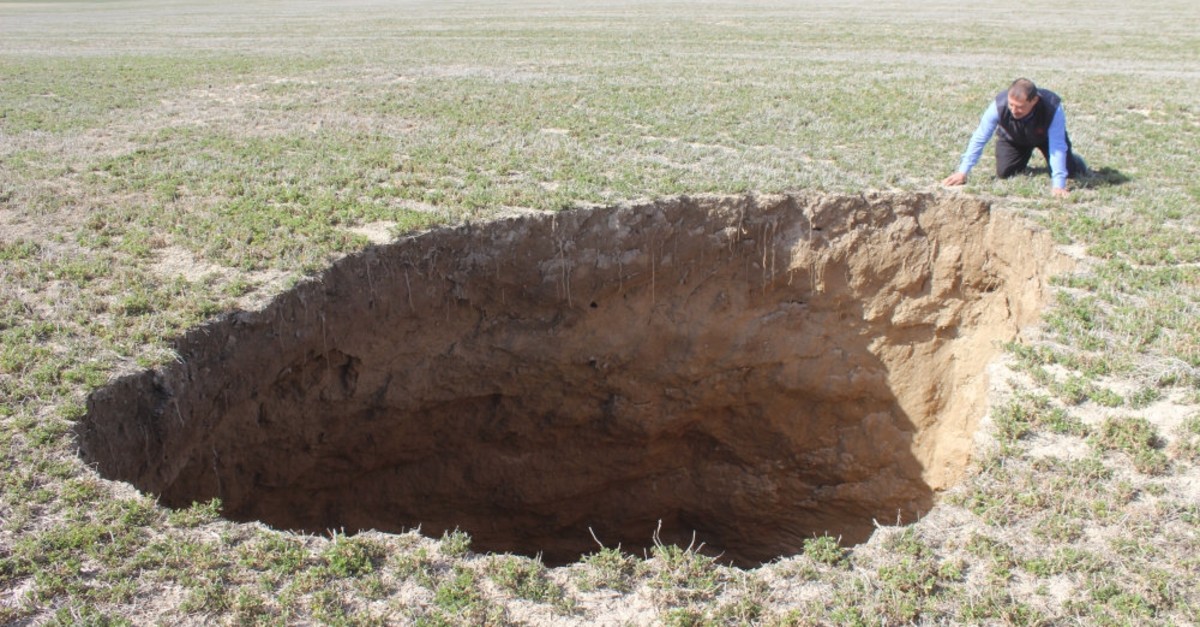 Uncontrolled and negligent use of groundwater threaten the Konya Plain in the eponymous central Turkish province, which is known as the "grain silo" of Turkey for its vast wheat fields.

The number of sinkholes has rose substantially in recent years due to excessive use of groundwater for irrigation, while authorities work on plans on how to fill the voids of some 330 sinkholes. No casualties were reported so far but sinkholes render a significant portion of fields unusable.

Sinkholes are almost exclusive to the Konya Plain, which stretches as far as neighboring province Karaman. The characteristics of the land, streaming direction of water, combined with underground waters' recline contribute to formation of sinkholes. Some are shallow while others are as deep as 150 meters. Sinkholes are a fairly recent phenomenon but uncontrolled use of water since 1970s is the main factor behind their rise.The State Hydraulics Works Agency declared areas with multiple sinkholes off-limits to use of groundwater as a precaution and works to inform farmers on how to properly use water for irrigation without draining up the water resources.

Arık, who also heads the local chamber of geology engineers, says they received proposals to fill up the sinkholes at times and they have been working on how to reduce the damage sinkholes pose. "Some sinkholes are filled with chemicals to turn the land into its former state but we don't have verified data if they are compatible with preservation of nature," he told Anadolu Agency (AA).

"Farmers try to come up with solutions too, in filling the sinkholes but in the end, they cannot be filled properly as the void beneath the land is wider than the one visible to the eye. It is better to mark the area with sinkholes to prevent accidents," he says. Arık says they have to take steps to prevent future sinkholes and the first step was to tackle illegally opened water wells. "If people continue drilling wells uncontrollably, without inspection, we won't have even drinking water soon," he warns.

North of Konya, the central province of Çankırı also suffers from an increasing number of sinkholes in recent years. The first known sinkhole in the province was a 15-meter one formed in a village in 2015.

A large number of sinkholes have appeared since, including two large ones, in and around that village in the ensuing years, prompting 150 villagers to seek help from the Disaster and Emergency Management Authority (AFAD).

AFAD examined the place and urged the villagers to evacuate it to prevent a possible disaster. The village is now being relocated 2 kilometers away from its current location.

Professor Ceyhun Göl from Çankırı Karatekin University says like those in Konya, Çankırı sinkholes are mainly linked to unregulated use of groundwater. "The rise in population in the world and Turkey naturally triggered an increase in the needs of human beings and consumption increased. This led to climate change and climate change has different effects in different places. Sinkholes are such an effect it has in ‘karst' lands," he says, referring to characteristic topography of Çankırı and Konya formed from the dissolution of soluble rocks.

"Karst lands dissolve upon excessive exposure to water and this is what creates sinkholes. Sinkholes have always been here but they weren't drawing attention as the population was scarce and industry was not that developed in the past. Settlements were scattered too, so people weren't even aware of sinkholes. Increased agricultural activities and increasing population in recent years caused sinkholes to be closer to heavily populated areas, even causing casualties and property damage," Göl said.

"There should be risk maps and a grading system. Uncontrolled water use, illegal wells should never be tolerated," Göl says. One solution might be incentives for crops depending less water, he adds. He also warns that existing sinkholes should not be filled and instead, they should be designated as no-go zones.