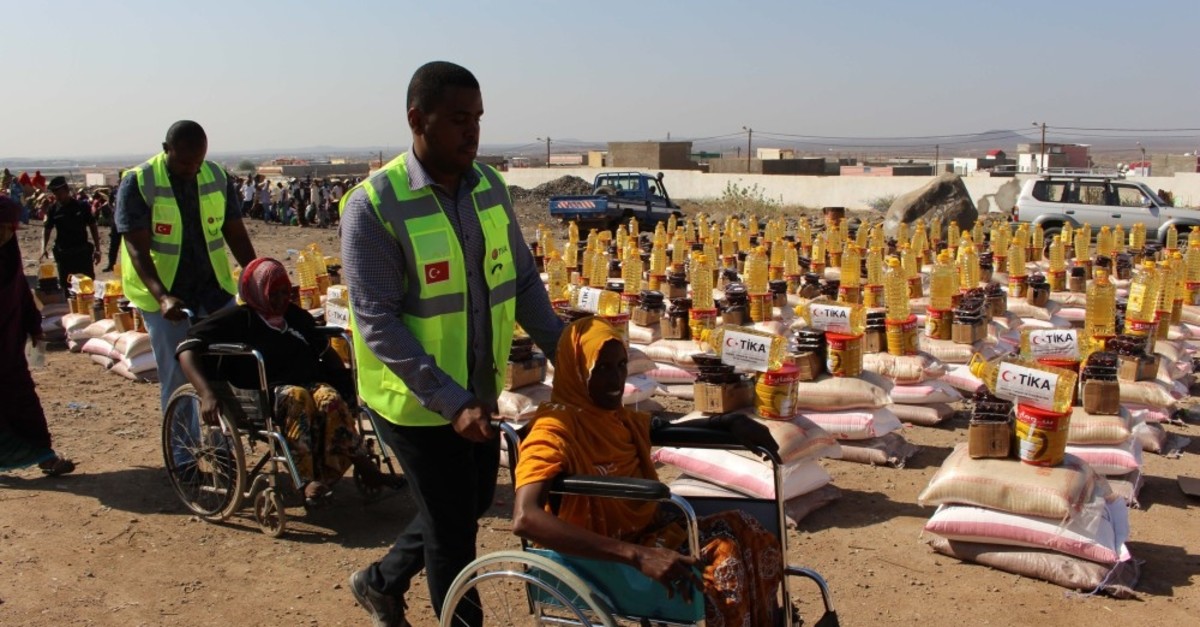 The Turkish Cooperation and Coordination Agency (TİKA), in coordination with the government of Djibouti and the local governorate, reached out to families in Lac Assal, a drought-hit area of the East African country's northern Tadjourah region, as well as in the capital Djibouti.

The aid delivery is part of Turkey's cooperation with Djibouti in its fight against drought and poverty. The delivery targeted impoverished families and disabled citizens in the East African nation. 500 families and 2,500 people benefited from the aid, which consisted of 90-kilo food packages.Djibouti is the country with the worst "food deficit" according to the World Food Program (WFP), which says in a report that an estimated 16% of the population lives below the international poverty line. A 2017 survey by the World Bank shows a national extreme poverty rate in the country located on the Horn of Africa at 21.1%. A hot and dry climate with scarce rainfall throughout the year affects agricultural production, thus making access to food difficult for the population, especially in northern regions. It depends mostly on imports of food commodities. Turkey has boosted its bilateral relations with the country as part of its "African opening" to improve ties with African countries. In particular, ties improved since 2012 when Djibouti set up an embassy in Turkey and direct flights between the two countries started.

Also in 2012, TİKA opened an office in Djibouti for its humanitarian projects. The two countries have signed 60 protocols, memorandums of understanding and conventions in areas such as energy, health and the economy.

Earlier this month, construction of the Ambouli Friendship Dam in the country by the Turkish government was completed. The dam will curb floods hitting Djibouti, the capital, where 75% of the population lives. Construction of the 71-meter high dam started in 2017. Built by Turkey's State Hydraulic Works agency, it will help store water for irrigation in the arid country. Despite its climate, Djibouti is exposed to floods when downpours hit the highlands surrounding the capital. The dam has a stock volume of 14 million cubic meters.

As a part of Turkey's development aid to Africa, TİKA currently operates on the continent through 15 program coordination offices, and with the help of these offices, technical assistance is provided to African countries. Earlier this month, the agency delivered 20 tons of potatoes to farmers in the eastern African archipelago country of Comoros to be used as seeds in potato cultivation.