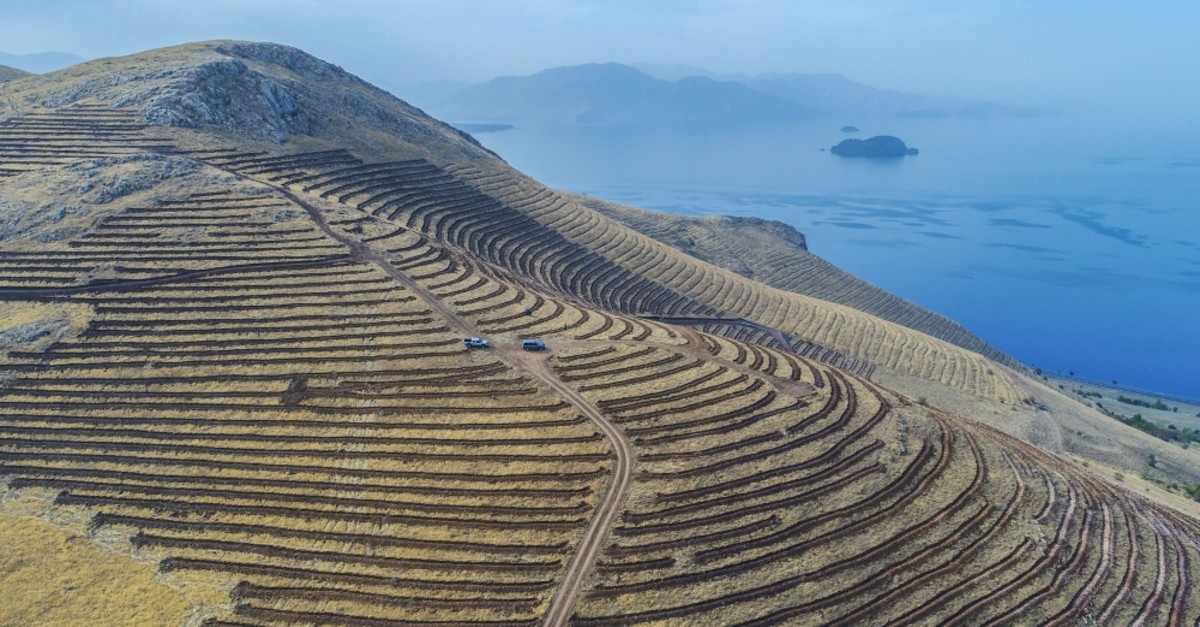 Freshly built terraces on the outskirts of Artos Mountain in the eastern province of Van. Terraces where saplings are being planted help prevent soil erosion in this arid area.
by Daily Sabah Jun 18, 2019 12:00 am

The loss of the fertile land in Turkey decreased by 72 million tons, the minister of agriculture and forestry said, but the world continues to lose 24 billion tons of productive land to desertification and drought every year

A three-day event on desertification bringing together ministers and high-ranking bureaucrats from 20 countries kicked off in the Turkish capital of Ankara yesterday.

Speaking at the opening, Agriculture and Forestry Minister Bekir Pakdemirli said Turkey managed to decrease the loss from 500 million tons of fertile soil yearly to 154 million tons since the 1970s as less and less land is exposed to erosion. He said their ambition was decreasing it further to 130 million tons.

"Sixteen years of tree planting, anti-erosion measures and good agriculture applications helped facilitate a 72 million ton decline in the land loss, an equivalent of about 30,000 football pitches," Pakdemirli said. He said although every country threatened by desertification was determined to combat it, it would be only possible through international, integrated policies with multi-actor approaches and efficient solutions.

The day was observed around the world to raise awareness of international efforts on ways to recover and restore degraded soil. "Every year, the world loses 24 billion tons of fertile soil. The dry-land degradation reduces national domestic product in developing countries by up to 8 percent annually," U.N. Secretary-General Antonio Guterres said in a video message on Sunday. Guterres also called on the world to "urgently" change such tendencies, saying protecting and restoring land can reduce "forced migration, improve food security and spur economic growth."

The global observance of the day along with the U.N. Convention to Combat Desertification was adopted in 1994. According to U.N. data, 1.8 billion people will experience absolute water scarcity by 2025 and some 135 million people may be displaced as a result of desertification by 2045.

Minister Pakdemirli said desertification was a growing, sinister threat, "more dangerous than conflicts." "Without sustainable land management, it is not possible for countries to maintain sustainable development. The world today is aware of joint action against global environmental problems. It is time to build our future together," he said. Pakdemirli noted that Turkey was exerting efforts to that extent and every year, trained some 100 experts from about 50 countries in how to combat desertification. "By the end of 2018, more than 800 people from various countries were trained on the issue and on how to prevent desertification and erosion. For instance, we cooperate with almost all African countries in the fight against desertification," he said.

For its part, Turkey, a country with rich biodiversity and geography enabling it to better manage natural resources, "took giant steps" in recent years, the minister said. "President Recep Tayyip Erdoğan launched a national mobilization campaign for planting trees, and we planted 4.5 billion saplings in a short time. We plan to plant as many saplings as the world population by 2023, the centenary of the Republic of Turkey," he said.

Events in Ankara by the Ministry of Agriculture and Forestry focus on the phenomenon with photo exhibitions, panels and the International Soil Congress. The events will also host training workshops on how to combat desertification as well as technical trips to Konya, a central Turkish province known for its arid climate, and Mersin in southern Turkey.

The U.N., which designated the day, says desertification does not include the expansion of existing deserts but rather the vulnerability of dry ecosystems that make up one-third of the world's land area. Arid ecosystems often fall victim to overexploitation and inappropriate land use. Among factors contributing to desertification are poverty, political instability, deforestation, overgrazing and bad irrigation practices. According to the U.N., some 1.8 billion people will experience water scarcity by 2025 and by 2045, some 135 million people may be displaced as a result of desertification. The U.N. calls for sustainable land management and the restoration of areas exposed to desertification.