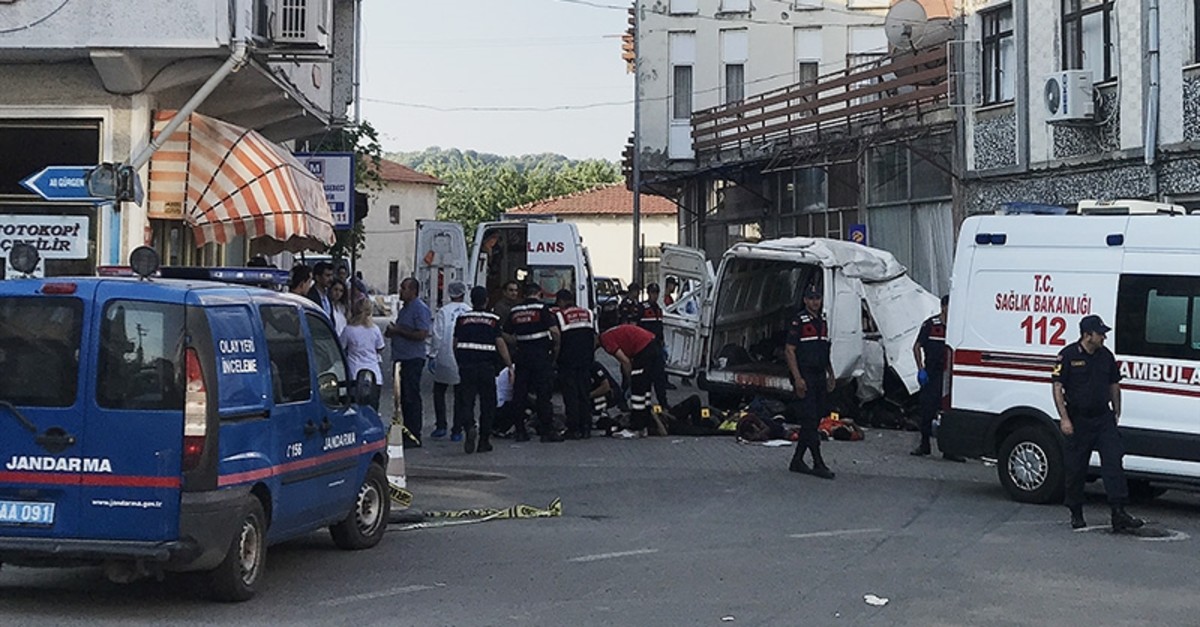 Ten illegal migrants were killed and 30 others were injured when a van carrying them crashed into the wall of a store Wednesday in Edirne.

The migrants were traveling in Meriç, a district of the northwestern province near the border with Greece, when gendarmerie troops tried to stop the van. The driver sped away before crashing into a store at an intersection in the early hours of yesterday. The victims were identified as Pakistani and Indian migrants while the driver was a Turkish man. The injured were taken to hospitals in Edirne and the driver, who was also injured, was detained after his treatment.

The Edirne Governorate said in a statement that gendarmerie troops on patrol wanted to stop the van upon suspicion but the driver ignored them and fled before the vehicle crashed. Sharjad Kuram, a Pakistani migrant who escaped the accident injured, told Anadolu Agency (AA) that the small van was full of migrants and they were "barely" breathing in the small space at the back.

"The driver was going at a high speed. Then, suddenly, we heard a loud noise and everyone lost their grip. They were scattered when I passed out. I was in the hospital when I opened my eyes again," he said.

Nazım Deniz, a shopkeeper whose store is located across the site of the crash, said the van was completely wrecked after the accident and he and others used sledgehammers and axes to rip open the twisted doors.

"There were dead and injured. The van was very, very crowded," he said. Engin Er, another eyewitness, said migrants are a common sight in Meriç. "You see people trying to cross the border every day," he said.

Edirne, bordering with Greece, saw a new influx of illegal migrants trying to reach Europe in March and April. Seemingly organized, hundreds of migrants, mainly from Afghanistan, Iran and other countries, headed to Edirne in an influx triggered by social media rumors that Europe would admit more migrants. Thousands of migrants were intercepted in Edirne and its districts near the border since January 2019.

The border in Edirne is better policed compared to the Aegean coast of Turkey where the Turkish Coast Guard struggles to stop dinghies departing from the long coastline to the nearby Greek islands. Still, desperate migrants prefer the land border, especially in the winter months when a safe journey through the Aegean is nearly impossible.