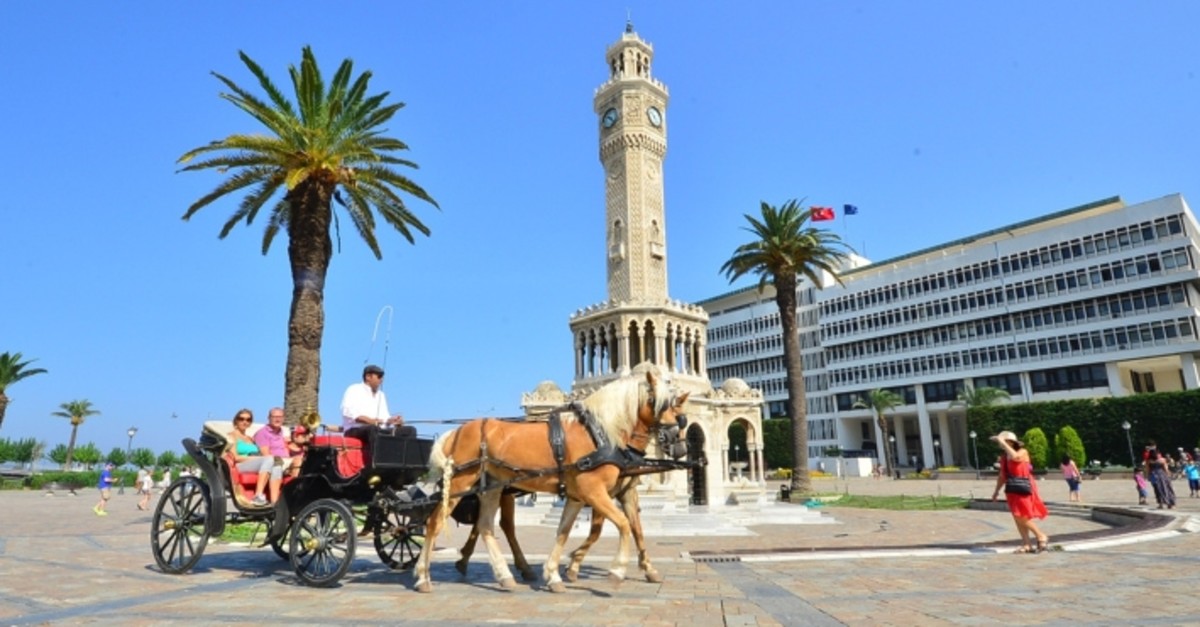 The Izmir Metropolitan Municipality (IBB) said in a statement Wednesday that a directive dating back to 2011 regulating horse-drawn carriages, known as "fayton" (phaetons) by locals, has been annulled by the general assembly of the city's Transportation Coordination Center (UKOME).

The western Turkish city's transport company IZULAŞ had closed its small-scale phaeton operation running in the city's famous Kordon seafront area on May 1. The municipal carriages were introduced in 2012 to replace existing carriages and offer touristic trips by trained drivers using lighter carriages, Austrian Haflinger horses – a breed more suitable for the task – and a proper stable facility. Several carriages, fitted with electric engines, will continue to serve in the area.

The latest decision altogether bans carriages drawn by animals from using the streets and avenues in areas under the jurisdiction of the IBB except for official ceremonies.

It also cancelled the operation of 32 carriages in Karşıyaka, Selçuk and Dikili districts.

Izmir Metropolitan Mayor Tunç Soyer said that it has been among the municipality's priorities to altogether remove phaetons since the March 31 elections.

The municipality of Menemen district located north of Izmir, still maintaining a sizable rural population and agricultural activity, had already banned horse-drawn carriages in the town center on June 18.

Horse-drawn carriages were a familiar sight for Izmir citizens for decades, with stops next to piers on both the southern and northern coasts of the gulf separating the city, carrying those who landed from ferries to their destinations. Using phaetons for transport as well as sightseeing was common in several areas, mainly in Karşıyaka district, even until 1990s despite a well-established mass transport network.

Increasing population and traffic made it impossible for horse-drawn carriages to properly operate and experienced phaeton drivers, who were known by locals and provided good care to their animals, went out of business. The few regular phaetons that remained were constantly associated with poorly cared-for, abused or tortured horses, overpricing and other issues.

However, convoys for circumcision feasts or weddings made up of horse-drawn carriages – one carrying local musicians loudly playing the traditional drum and zurna – are still a common sight in downtown Izmir, along with many other cities and towns in Turkey. The IBB's decision will probably mark the end of this tradition.

The move in Izmir came weeks after the metropolitan municipality in southern Antalya banned horse-drawn carriages, which mainly operated for tourists, from the city's historic center and Alanya and Manavgat districts as of June 10. Previously in May, phaetons were banned in the Aegean resort town of Kuşadası in Aydın province.

The recent moves to ban horse-drawn carriages also come amid increased awareness and public mobilization on animal rights. Often described as a haven for stray animals, especially for cats roaming free in its cities, Turkey occasionally faces incidents of violence, cruelty and abuse against animals. Animal activists have long campaigned for violence against animals to be categorized as a crime instead of misconduct, in addition to aggravated penalties. Existing laws only impose fines for crimes against animals. Despite a consensus on the issue, a draft bill foreseeing prison terms for crimes against animals proposed to the cabinet by relevant ministries is still pending in the parliament.

However, the bleeding wound of the horse-drawn carriage issue in Turkey – the phaetons of Istanbul's beautiful Princes' Islands – continue to remain in obscurity. Inhabited by some 15,000 people during winter, the islands are closed to motor traffic and some 1,000 horses are used to draw carriages. However, when resident population swells to over 70,000 during the summer with tens of thousands of tourists visiting daily, the agony of the horses begins.

Activists claim that dozens of horses die every summer on the steep roads of the islands after being forced to carry heavy loads for long hours without any breaks. They claim that most of the horses brought to the islands are either old and crippled race or utility horses. Footage emerges every year of exhausted and wounded horses collapsing and dying in the streets while dozens look on. Accidents, overpricing and fights are common, and some coachmen were even charged with forming a gang. Despite protests, pledges to introduce electric carriages and even minor scuffles between activists and coachmen both on the islands and on the mainland during the transportation of the horses, the issue remains unresolved.

President Recep Tayyip Erdoğan pledged on March 24, a week before the March 31 local elections, that 274 electric phaetons would be introduced on the islands and the problem will be solved. Istanbul's newly-elected Metropolitan Mayor Ekrem Imamoğlu also pledged during a visit to the islands on March 18 that a center would be established to take care of the horses' health, care and treatment. His opponent Binali Yıldırım also said that this "disgrace" would be ended and electric carriages would be introduced instead.