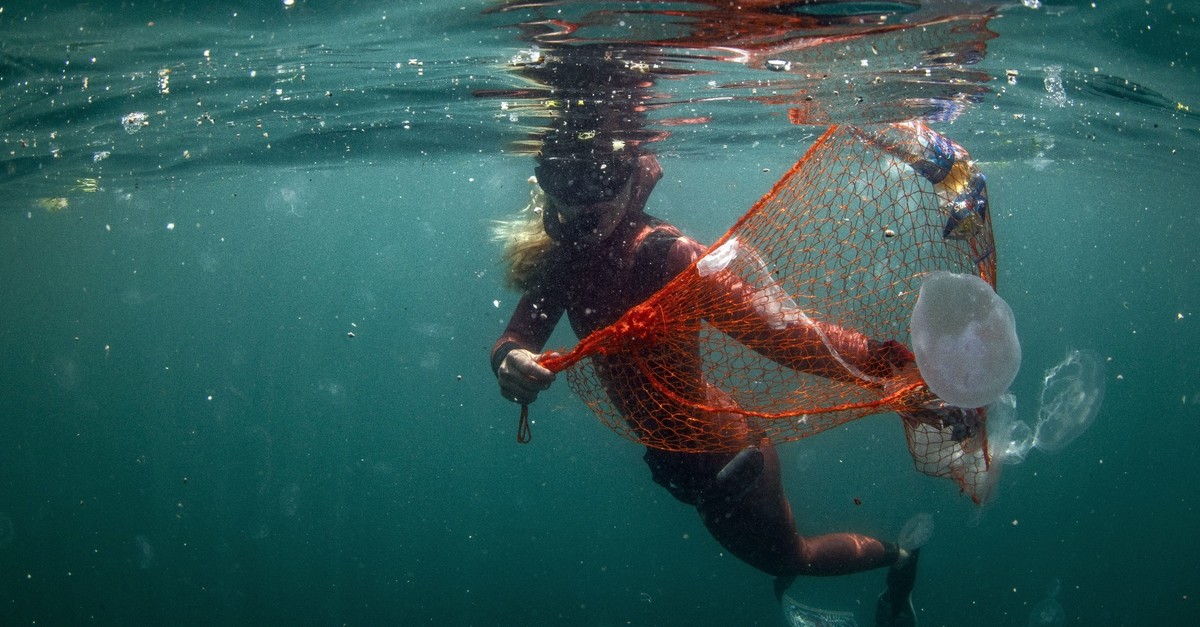 u015eahika Ercu00fcmen, a world record-holding diver, collects garbage underwater during the launch of the Zero Waste Blue project by Emine Erdou011fan in Istanbul, June 11, 2019.
by Compiled from Wire Services Jun 28, 2019 12:06 am

As heads of governments and states gather for the G20 Summit in Japan today, first lady Emine Erdoğan will promote Turkey's Zero Waste Blue project in a meeting of first ladies, focusing on solutions to pollution in seas and oceans

Fighting marine waste is one of the themes in this year's G20 Summit hosted by Japan. First lady Emine Erdoğan, who champions a "zero waste" campaign in Turkey, will join the spouses of leaders at the summit for an event on marine pollution. At the summit, Mrs. Erdoğan will promote the Zero Waste Blue project she recently inaugurated with the endorsement of nonprofit organizations.

Zero Waste Blue aims to collect at least 50,000 tons of waste, including 30,000 tons of plastic from seas and other bodies of water, during the summer season.

The Ministry of Environment and Urban Planning coordinates the project in cooperation with the Turkish Marine Environment Protection Association (TURMEPA). Environmental events held throughout the summer as part of the project will attract attention to Turkey's seas and water resources. Cleaning activities are also being carried out near seashores and in water sources throughout the summer months, while a public awareness campaign was launched on the importance of coastal and marine cleaning.

A symposium, which will be held during the summit, on June 29, will exclusively focus on marine pollution. The symposium will tackle issues like encouraging sustainability of ocean resources by G20 members and international agencies and how individuals can help in protecting the oceans and seas.

Emine Erdoğan will also meet Yasushi Hanamoto, the Mayor of Kamikatsu. Kamikatsu, a small Japanese town with about 800 households, won global fame for its zero waste efforts and for recycling more than 80 percent of its waste three years ago, inspiring many others, including Turkey, to curb random and misguided practices for eliminating waste. The first lady will exchange ideas with Hanamoto about zero waste practices.

Plastic waste makes up 75 percent of marine pollution. Every year, 8 million tons of plastic end up at seas. It causes deaths of more than 1 million seabirds, 100,000 mammals and turtles every year. Experts warn that there will be more plastic waste in seas than fish in 2050 if measures are not taken. Another danger is marine species ingesting plastic waste. Reports by environmental organizations show more than 270 species have been documented as having been harmed by entanglement in plastics, while more than 240 species have been found to have ingested plastics. Every year humans and animals continue to ingest plastics from food and drinking water, with the full effects still unknown."

G20 countries are responsible for almost half of plastic waste in the world. G20 ministers of environment and energy convened in Japan's Nagano prefecture earlier this month to prevent marine pollution. The G20 will adopt a new implementation framework for steps to reduce marine plastic waste, though on a voluntary basis, the Japanese government said after the meeting of ministers. Environmental activists call for more ambitious steps on the issue. Speaking to Agence France-Presse (AFP) after the meeting of ministers, Yukihiro Misawa, plastic policy manager of environmental group WWF-Japan, said, "Legally binding international rules with clear timelines and goals are needed."

Under the agreement by ministers at the meeting, G20 member countries will commit to reducing plastic waste, but the steps are expected to be voluntary.

Plastic pollution has become a global concern, particularly after bans imposed by China and other countries on the import of plastic waste from overseas. Many countries, including Japan, have seen their waste pile up as a consequence. The framework agreed at the meeting would be the first to reduce plastic pollution in the ocean involving not only rich nations but emerging economies as well.

Only an estimated 9 percent of plastics ever produced are recycled and campaigners say the only long-term solution to the plastic waste crisis is for companies to make less and consumers to use less.

For its part, Turkey imposed a fee on plastic bags at stores earlier this year, leading to a steep decline, up to 80 percent, in the use of bags. Plastic bag use per person is 440 annually in Turkey and about 30-35 billion plastic bags are used in the country yearly. An estimated 5 trillion plastic bags are used worldwide every year, and they mainly contribute to marine pollution. Plastic bag restrictions are part of the zero waste project inaugurated by Emine Erdoğan. Some 14,000 public institutions, from the presidential complex to ministries and their branches are integrated into the project, which covers recycling of waste, sorting the waste at its source and recycling food waste to compost. The campaign helped Turkey to rediscover its potential to be a more eco-friendly country, despite heavy industrialization in recent years. The ensuing recycling drive saw zero waste collection areas set up in more places, from shopping malls to businesses, schools, hotels, airports, etc.