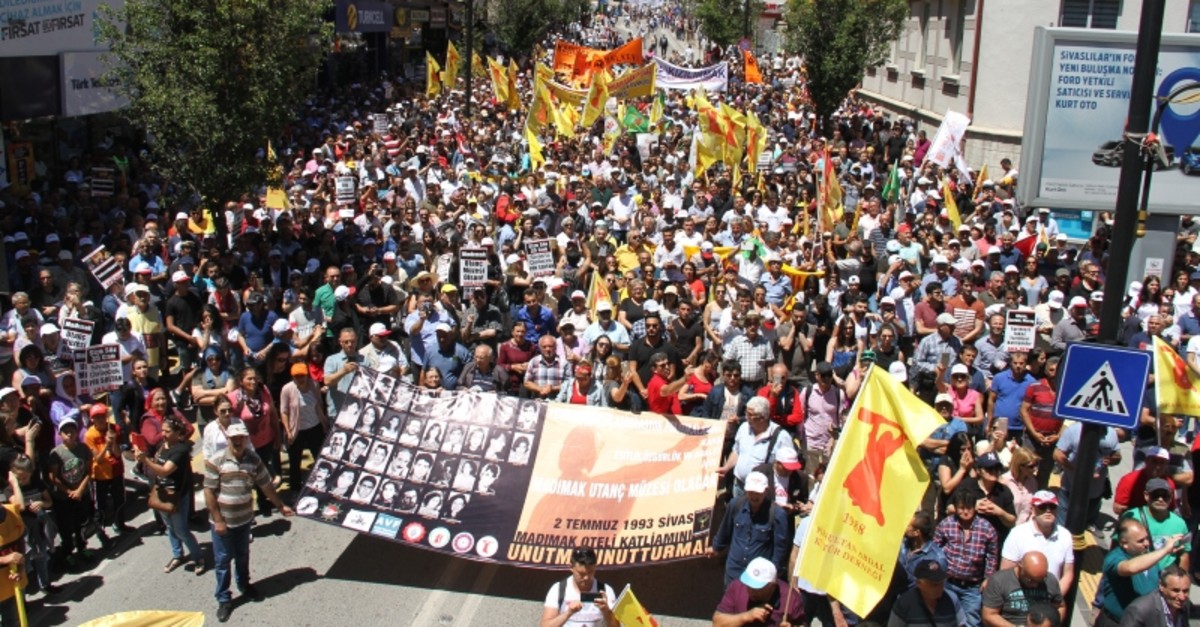 The killings of 35 people trapped in a hotel set on fire by an angry mob in the central city of Sivas in 1993 were remembered Tuesday on the 26th anniversary of the incident, which was one of the darkest chapters in Turkey's tumultuous 1990s.

Commemorations held across Turkey culminated at the Madımak Hotel where a memorial was set up for 35 victims, from artists to intellectuals. Mourners, including the city's governor, Salih Ayhan, left carnations in memory of the victims.

The incident, which targeted mostly Alevi intellectuals and artists staying at the hotel, is blamed on provocateurs among an angry mob gathered to "protest" the hotel's tenants for their alleged anti-Muslim sentiment. The hotel guests had gathered to celebrate the life of famous poet Pir Sultan Abdal when angry protesters surrounded and attacked the hotel.

Two of the attackers died in the blaze. Dozens were arrested following the incident and 33 were convicted.

Speaking to reporters on the sidelines of the commemoration ceremony, Gov. Ayhan said the incident was "a dagger pushed through the heart of Sivas."

"There have been similar incidents that year but the most tragic one was in Sivas. May Allah bless the souls of victims," he said.

The governor said it was a shared pain of Turkey and although it left deep scars in the hearts, it would keep the nation united.

Speaking at the commemoration ceremony, Erdoğan Döner, head of the Cem Foundation of Alevi Associations, said he believed "everyone took lessons" from the killings.

"No faith sanctions the killing of people. Islam in particular, does not tolerate hatred and violence," he said.

Döner said they sought a conversion of the hotel into a memorial museum.

"This is a tragedy shared by everyone," he emphasized.

The massacre was an obvious attempt to intimidate Alevis at a time of political turmoil and an increasing presence by the PKK terrorist group which is blamed for the Başbağlar incident, a village in the Erzincan province where 33 villagers were killed three days after the Sivas incident.

The Başbağlar massacre was viewed as the terrorist group's response to the incident. Yet, both incidents thankfully failed to stoke a broader conflict between Sunni and Alevi communities.

Critics of the Sivas trial long claimed the real perpetrators behind the incident were not brought to justice.

The "perpetrators" the critics refer to are notorious members of the "deep state" that is accused of pitting the Sunni community against Alevis and vice versa. The deep state referred to by media outlets is a shadowy community of bureaucrats, soldiers, mobsters, police officers and other figures and as its name implies, it was never fully revealed. It is the culprit in a string of murders of journalists and civilians in the 1990s.

According to the report, officials failed to take adequate safety precautions to prevent the attack, which could have clearly been anticipated.