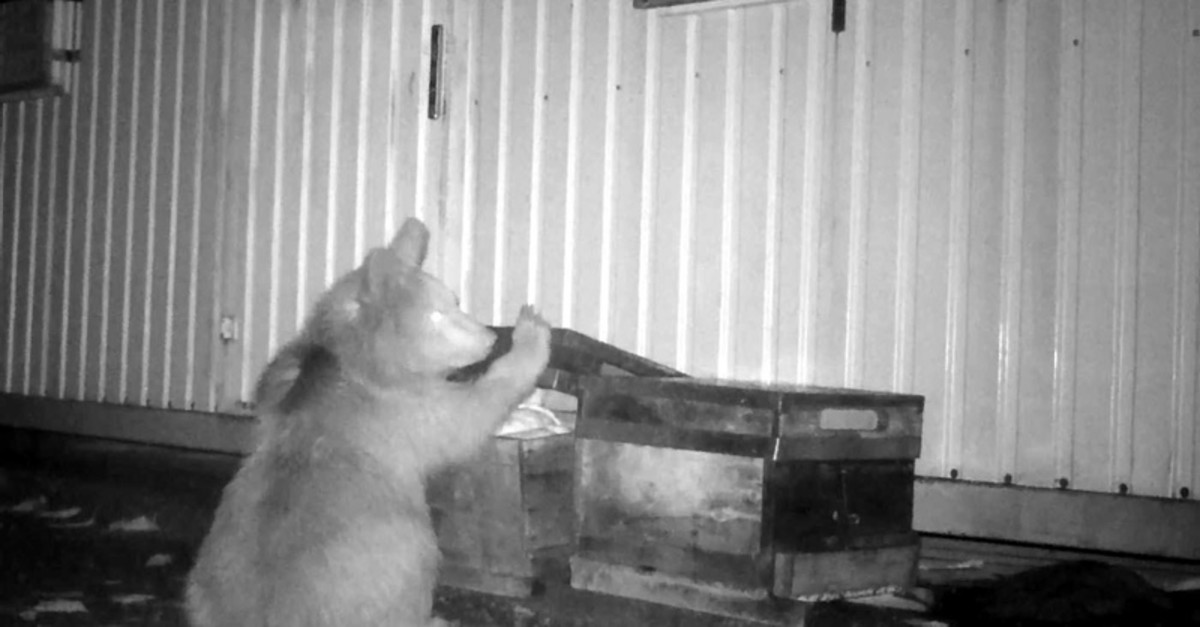 Winnie the Pooh, is that you?

A sleuth of hungry and clever bears has once again been caught sticky-handed, stealing honey from a man's honeybee farm in the Black Sea region of Turkey.

Ibrahim Sedef, a Turkish agricultural engineer who has been beekeeping for over 10 years in the Sürmene district of northern Trabzon province, has been plagued by what seems to be a family of bears for the past three years. He has tried an array of solutions to keep his beehives safe and intact, away from the paws of these fluffy yet unwanted guests, but he hasn't been very lucky so far.

He first got steel cages installed to stop the bears from reaching the hives. However, the bears proved strong and managed to topple the cages over.

Then he tried to reinforce them with cement, but the honey-jacking criminals started to dig the soil around and under the cages. They eventually got inside, destroyed the hives and ate all the delicious honey.

Fed up of this crime spree, Sedef decided it was time to think like the little burglars and follow them around. So, he placed cameras on every corner of his shed and bee-making facility to track their every move.

Thinking he was now one step ahead of his opponents, the engineer decided to place some of the hives on top of his shed, out of the bears' reach. He then tried to distract them and lure them to decoy hives full of bread, fruit and even a bit of their favorite – Anzer honey — in hopes that they would be satisfied with his offerings.

But things don't always go according to plan, and Sedef of all people should've known.

The clever cookies they are, the bears took their time and tucked into the scrumptious treats left by the man. The gluttonous family then set its sight on the real prize, which was just a climb away.

Conveniently situated next to a tree, the bears easily climbed on top of the shed to reach the hives Sedef had tried so hard to hide from them. With full bellies, the bears were then seen sliding down the trees just like firefighters.

The whole chuckle-inducing ordeal was thankfully caught on film by Sedef's cameras.

Speaking to Demirören News Agency (DHA), Sedef said that at first it was only one bear who came for the occasional treat but then it decided to bring its whole family of five along.

"They took three of my hives in their last heist. But I give my blessing to them, it's all theirs. After all the trouble they went through by climbing that tree, I'll just let them. I promise, from now on I will feed them. In spite of what happened, when I watch the recorded moments, I forget all the damage they caused me and I love them," he said.