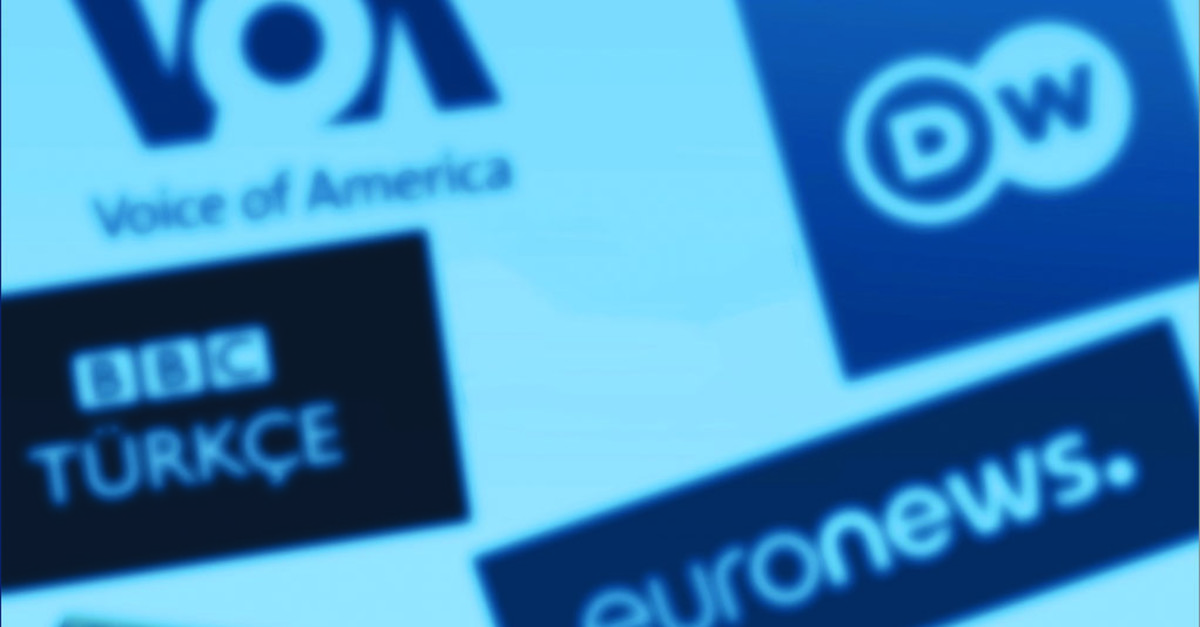 From BBC to Deutsche Welle, Turkish services of international media succumbs to biased coverage and negative portrayal of developments in Turkey while its staff violates their own guidelines by taking sides in political matters, a new report by think-tank SETA shows

A report by the Foundation for Political, Economic and Social Research (SETA), a prominent think tank, indicated the highly biased coverage of Turkey by the international media. "International Media's Extensions in Turkey," written by SETA's Society and Media Research Director İsmail Çağlar and the think tank's assistant researchers Kevser Hülya Akdemir and Seca Toker, focuses on the Turkish services of international media outlets, including the BBC, Deutsche Welle, Voice of America (VOA), Sputnik, Euronews and The Independent. The report almost exclusively analyses media companies linked to the states they are centered in and/or funded by. It lays bare how the critical coverage of Turkey on select issues overlaps with biased, ideological views of the media companies' Turkish services staff, turning those services into a chorus of disapproval and a source of one-sided coverage.

Speaking to Daily Sabah, İsmail Çağlar said one of the report's purposes was to analyze whether the international media was truly objective, giving coverage to different opinions when it comes to issues related to Turkey. "Turkey has seen increasing interest by international media in recent years and upon criticism of [a perceived bias against Turkey in their coverage], they state that they are not biased and have place for opinions differing from theirs. Our research tested whether this is true," Çağlar said.

Using an open-source approach, researchers examined news about Turkey originating from BBC Türkçe, VOA, Sputnik Türkiye, Euronews, Deutsche Welle, The Independent Türkçe and CRI Türkiye. They also monitored the tweets about the current affairs of Turkey by employees of Turkish services of the international media, to observe "whether they violated principles of international media companies with regard to employees voicing their opinion online."

Çağlar said that results "unfortunately" showed that Turkish services of international media were far from impartiality and were "places where a certain ideological view is dominant." The report is narrowed down to coverage of critical issues regarding Turkey while assessing how Turkish services of international media approaches them. These are July 15, 2016 coup attempt that saw a terrorist group trying to seize power and killed 251 people in the process, Turkey's fight against terrorism, especially the PKK's violence in 2015 and subsequent years in the southeastern Turkey, Turkey's Syria policy, "mega projects" inaugurated by the government including an airport and a bridge in Istanbul and finally, economic fluctuations.

For instance, BBC Türkçe "shied away" from adopting a strong anti-coup rhetoric during the 2016 coup attempt and devoted little time to the attempt and its perpetrators, the report said. Instead, it gave more coverage to the arrests of coup perpetrators and criticism of the state of emergency imposed following the coup attempt. Moreover, it painted President Recep Tayyip Erdoğan as the reason for the Gülenist Terror Group's (FETÖ) attempt to seize power, according to the report. The BBC also gave wide coverage to the crackdown on FETÖ and speculative reports by The Wall Street Journal, The Guardian, Economist, et cetera that was more critical of President Erdoğan than the coup's perpetrators, the report says. As for the counterterrorism efforts against the PKK, BBC Türkçe "favored" coverage of lawmakers from the Peoples' Democratic Party (HDP), a party known for its intimate links with the PKK. The SETA report said BBC Türkçe relied on speculative and false news spread by HDP lawmakers and portrayed counterterrorism efforts as "a conflict between the state and locals" in southeastern Turkey.

The report also delves into tweets and social media posts by BBC Türkçe staff. Çağlar said their findings show, for example in the BBC's case, online posts openly violated the company's principles on impartiality and objectivity, such as a warning that BBC staff "should not be seen to support any political party or cause." Examples cited in report clearly violates BBC principles, the report's authors say, such as BBC correspondent Mark Lowen who retweeted posts critical of some Turkish newspapers while endorsing content by other Turkish newspapers critical of the government. For Çağlar, "Western" media is not as balanced as it claims in coverage of Turkey news. He said the staff of Turkish services of international media apparently harbors certain fixed and biased views on Turkey and its policies as it is clear from their online posts while they were required by their companies' guidelines not to be biased especially on social media. A similar outlook in terms of biased coverage is apparent in Deutsche Welle Türkçe, the German media company's Turkish arm, the report shows. Like the BBC, Deutsche Welle Türkçe adopted a rhetoric accusing the government in the 2016 coup attempt instead of covering anti-coup views, according to the report. Samples from Deutsche Welle Türkçe coverage included in the report point out to a clear inclination to alleged manipulation of the coup attempt by President Recep Tayyip Erdoğan while there is hardly any news about FETÖ and its role in the coup attempt. In counterterrorism operations, the report says, Deutsche Welle Türkçe chooses to portray it as "a civil war" rather than country's fight against terrorism. Researchers say that the German media company also emphasized a rhetoric portraying Turkey's cross-border operations in Syria against the terrorist groups as "Turkey's war on Syrian Kurds." For grand projects such as a third bridge on Istanbul's Bosporus, Deutsche Welle said it was a debt burden for Turkey. Social media posts by Deutsche Welle Türkçe's staff, like Gezal Acer, meanwhile, portray Turkey as a place with no respect for human rights, the report highlights. Pelin Ünker, another journalist, is known for tweets accusing the government of corruption, the report says.

The detailed report, published by SETA on its website, cites many more examples about failure in impartial coverage of news on Turkey and showcases that the staff of Turkish services of international media mainly hails from a certain political camp strictly opposing Turkey's policies on a number of issues. The report drew reaction from said media companies and Çağlar said media companies "chose to fight" instead of self-criticism and tried to distort the facts about their coverage and views of their staff.

"They seem to be happy with the way they cover Turkey," he said in response to a question on whether the international media's Turkish services may change their views any time soon.

The report concluded that all companies included in the research adopted a news rhetoric opposing the incumbent Turkish government, save for one. On the staff of international media's Turkish arms, the report said, based on their social media posts and their background in the Turkish media, mostly hail from left-wing, secular media, pointing out to failure of international media to have staff with differing views of Turkey. "Almost all international media companies have guidelines regarding impartiality. Those are impartiality, an objective delivery of news, equal printing space-air time for different opinions, aversion to openly supporting a political party or cause and employing people of different opinions to avoid a one-sided news language. However, it is clear from news content and staff profile of five international media companies active in Turkey that they are far from these principles and adhere to a publication/broadcast policy to give voice to a certain set of views," the report concluded. It advises international media to "activate self-inspection mechanisms to develop a multi-voice news language complying with their own guidelines." It also calls upon the administration of international media companies to "monitor their Turkish services," noting differences of news policies between their Turkish service and other services.

The report's authors also urge international media companies to "diversify its staff profile" and be "more cautious about online posts by their employees openly advocating a certain political identity." Finally, they call upon international media to devote coverage to right of rebuttal while covering criticism of the government so as to present unbiased coverage to their audiences.