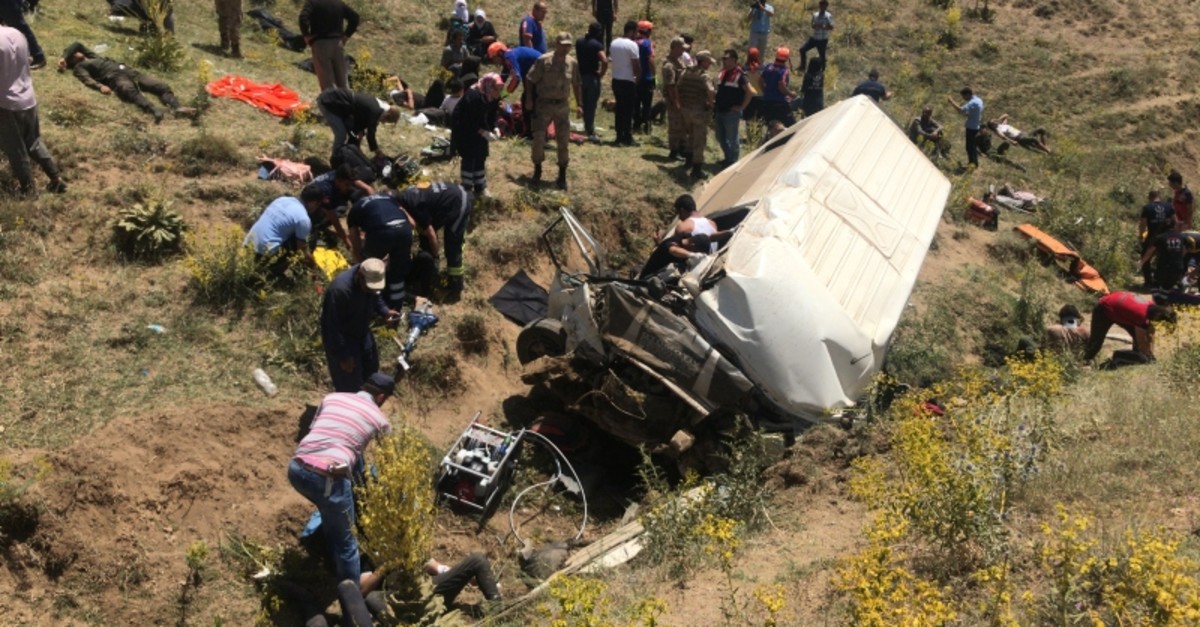 Seventeen people were killed when a minibus carrying illegal migrants crashed Thursday in the eastern province of Van in the latest tragedy to befall migrants flocking to Turkey to cross into Europe.

The minibus was traveling on a road connecting central Van to Özalp district when the driver lost control of the vehicle. The vehicle plunged into a ditch. Authorities said more than 20 people were also injured in the accident, while an investigation is underway into the cause of the accident.

Van Governor Mehmet Emin Bilmez told Anadolu Agency (AA) that the minibus was traveling on a mountainous road when it crashed, and they immediately dispatched rescue crews and ambulances to the scene. Bilmez said the minibus was carrying migrants from Muradiye, a district near the border with Iran. He added that authorities were still trying to identify the victims, but they believed the victims were Afghan, Pakistani and Bangladeshi nationals who make up the majority of illegal migrants intercepted in Van and other provinces near the Iranian-Turkish border. The governor said the perished victims included children.

"They fit 67 people in a minibus that normally seats 17-18 people by removing the seats," Bilmez told Ihlas News Agency.

This is the second-deadliest crash in one month involving illegal migrants traveling in cramped minibuses. Ten Pakistani and Indian migrants were killed and 30 others were injured on June 26 in the northwestern city of Edirne when a minibus crashed into a wall as the driver sped away from gendarme troops trying to stop it.

Turkey has been a key transit point for illegal migrants aiming to cross into Europe to start new lives, especially those fleeing war and persecution. However, journeys often turn lethal, be it a short journey to Greece by sea aboard unsafe boats or in overcrowded minibuses and trucks. At other times, they are aborted thanks to the vigilance of border guards. Twenty-eight people died when boats carrying migrants sank off Turkey's Aegean coast between January and June this year.

Illegal migration has been a priority for Ankara in recent years, especially after the conflict in neighboring Syria forced more than 3.5 million people from the country to take shelter in Turkey. Including Syrians, Turkey hosts about 5 million migrants and more than 1 million migrants live in Istanbul, the country's most populated city.

Interior Ministry figures show 152,000 illegal migrants have been stopped by security forces since January. More than 75 migrants are intercepted on a daily basis, and authorities say it is low compared to the 9,000 held every day a few years ago. Turkey also detained about 10,000 human smugglers in two years and considered heftier prison terms for smugglers to deter smuggling.

Still, the issue remains concerning, especially in the eastern provinces like Van, which is used as a point of entry for migrants arriving from Asian countries. Despite cold weather that sometimes extends into summer, migrants walk for days in rough terrain dividing Iran and Turkey, often with little food and water, to reach Turkey. At least three frozen bodies were found in a rural part of Van near the border in April, thought to be migrants who froze to death in winter. The bodies were found only after the heavy snow in the area thawed months later.

In Başkale, another district of Van, 284 illegal migrants were stopped yesterday by gendarme troops patrolling a route used by migrants sneaking into the country. Authorities said they were Bangladeshi and Afghan nationals.