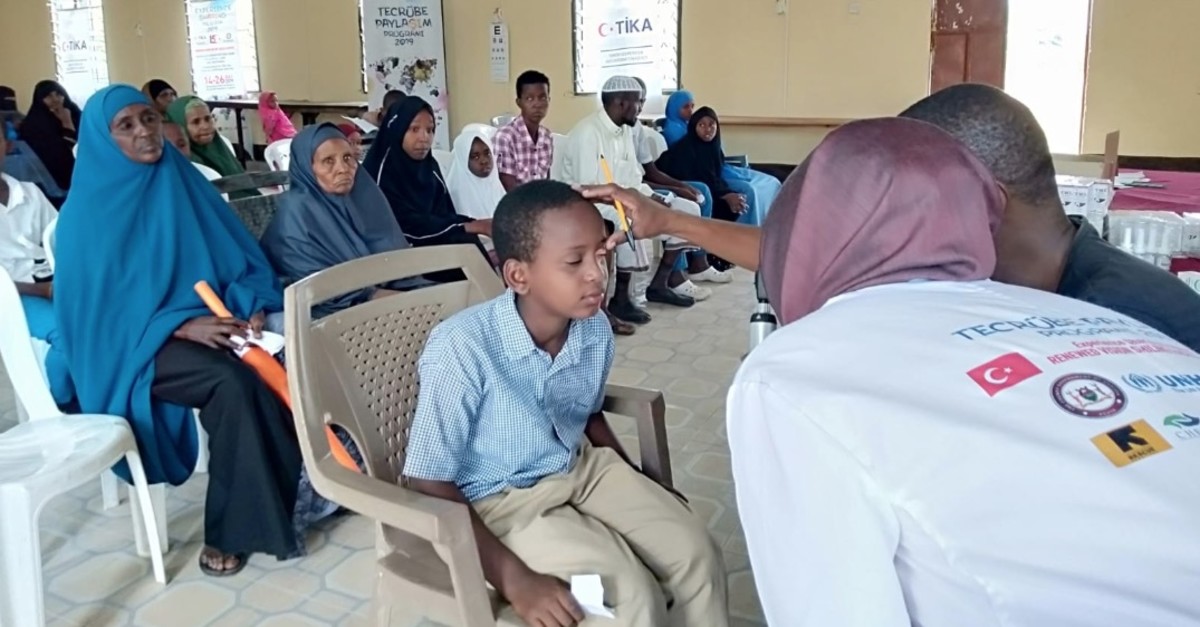 Turkish volunteers joined local doctors for medical examinations of locals in Garissa, Kenya.
by Daily Sabah with AA Jul 19, 2019 12:07 am

The Turkish Cooperation and Coordination Agency (TİKA) found an unusual way to mark Turkey's July 15 Democracy and National Unity Day. The state-run development agency reached out to poor Kenyans to offer free eye surgeries and treatment. A group of medical students from Turkey, part of TİKA's "experience sharing" program that sends students across the globe for humanitarian work, are assisting local and Turkish doctors in a one-week campaign dedicated to the day of July 15, which marks Turkey's victory against a coup attempt.

The fifteen students work in Garissa, Kenya, where doctors, in coordination with the local TİKA office and Kenyan nonprofit organizations, run an "eye health camp." Some 250 eye surgeries will be performed during the week in the region, while 13 schools in the region will host free eye check-ups for 5,000 people.

Many families struggle to access basic needs in Garissa, one of the poorest counties in the northeast of the East African nation of Kenya. In Garissa, most people are nomadic pastoralists, and the change in climate has made the weather erratic, contributing to poverty levels. The drought in the area has affected the area's nomads whose only livelihood is breeding and trading livestock.

Many in Garissa suffer from eye cataracts, cloudy corneas that result in blurred vision, due to exposure to harmful ultraviolet rays in the dry and always sunny country.

Ibrahim Guhad, 60, is among those who had eye surgeries. He partially lost sight in an attack five years ago and could not afford surgery to restore his sight. Doctors helped him regain his sight. Guhad said he applied for surgery before the annual Muslim pilgrimage hajj in Saudi Arabia, which he will depart for on Aug. 2. He said he wanted to see the Kaaba, the most sacred structure in Islam, "better."

"I have been checked and operated on. I was partially blind. I could not see well, but now I am told I will be able to see again tomorrow morning. I am thankful for the kind gesture that the Turkish people have shown us," Adan Ghale, a nomad, said.

Leman Coktu, a Turkish medical student, told Anadolu Agency (AA): "We are now helping people, and I am so grateful. We came for cataract operations. Today, we operated on 40 people. We will do more operations as the days go by. I am so grateful to be here. I like the people here, and I want to help them so much. I hope when I graduate I can come here again as a volunteer."

Dr. Hamid Alkizim told AA that the prescription glasses came at an opportune time. "The exercise comes just as students prepare for their end of second term examinations before the long holidays in August. The spectacles will help them study." "These students cannot afford prescription glasses, which go for about $120 to $180, which is really expensive." According to the Kenya Bureau of Statistics, residents in the area earn just less than 100 Kenyan shillings ($1) a day.

Turkish and Kenyan doctors will next travel to Dadaab refugee camp where they will perform eye surgeries July 22-26. Dadaab camp hosts more than 200,000 refugees from neighboring Somalia and is one of the largest such camps in the world.