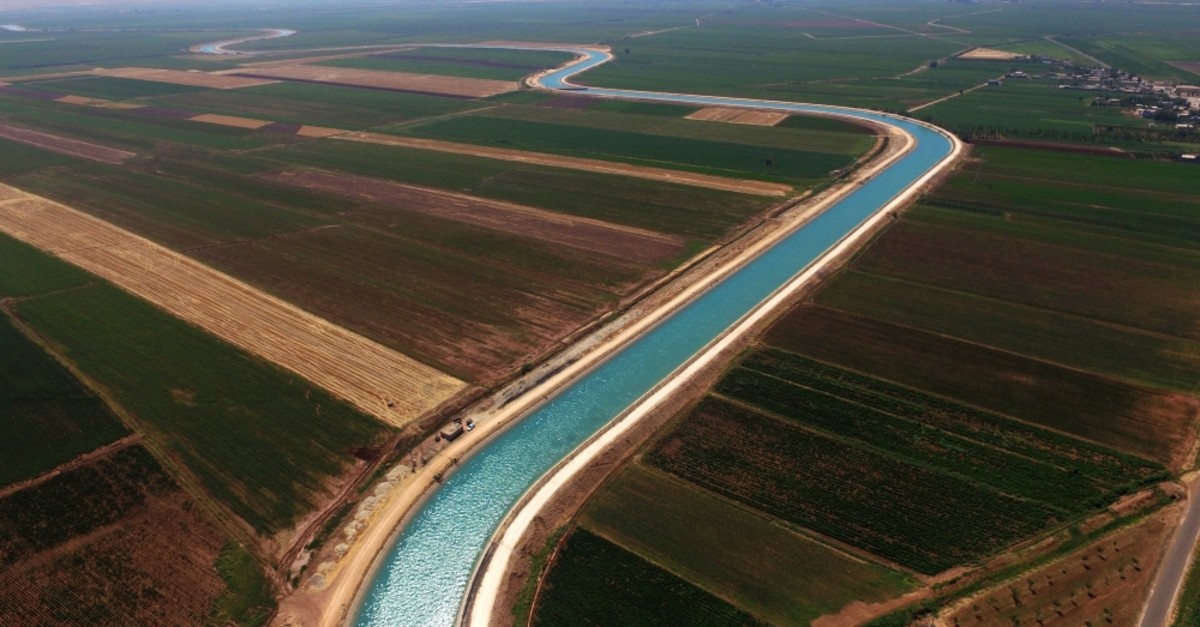 The Harran Plain enjoys benefits of an irrigation network courtesy of two tunnels linking it to the Atatu00fcrk Dam.
by Daily Sabah with AA Jul 21, 2019 12:28 am

The vast Harran Plain in the heart of southeastern Turkey's Şanlıurfa has put agriculture in the region back on the map over the past 25 years after a landmark irrigation project was launched. Now exceptionally fertile, Şanlıurfa leads the country in agricultural production

Harran Plain, one of the most important agricultural areas in Turkey, has been revived by the Southeastern Anatolia Project.

The region has significantly contributed to the nation's economy since water was first transported there from Atatürk Dam as part of the project, known as the Southeastern Anatolia Project, or Güneydoğu Anadolu Projesi (GAP) in Turkish. The fertile soil of the plain, located in southeastern Şanlıurfa province, was irrigated for the first time 25 years ago after two huge 26.4-kilometer tunnels connected Atatürk Dam to Şanlıurfa city center as part of the project, which is the largest investment in the history of the republic.

Due to the irrigation, which has continued for a quarter of a century, Şanlıurfa now leads the country in corn as well as cotton production.

Şanlıurfa was the first place in the world where wheat was produced and processed, Sadrettin Karahocagil, regional head of the GAP project, says. He said irrigation has made a huge contribution to employment and estimated that it provides new jobs for two to four people per hectare.

"When you go to Harran district, you will see a population of 80,000 on the sign. The vast majority of this population lives in villages and engages in farming. They [farmers] make a great contribution to both Şanlıurfa and the country's economy," Karahocagil added.

Satellite photos since the inauguration of the irrigation project are testaments to the revolutionary changes in the plain, which turned from a light brown, empty space to shades of different, bright colors as traditional crops like maize are replaced with cotton and corn. Today, Şanlıurfa, where the cotton fields were rare in the past, leads the country in its production at 56 percent. Similarly, it is among leading places in Turkey in corn production. It is all due to an irrigation network for a space of more than 1.8 million acres.

Karahocagil says Harran Plain's contribution to the Turkish economy rose to $2,000 per one hectare of agricultural land, from only about $500 thanks to the GAP project. "It diversified the cultivated crops, and farmers can now cultivate five different crops per two years now," he adds.

The plain has a high rural population compared to Turkey's other parts and unlike other areas in the southeastern Turkey where the migration to other cities in the west is high, it largely kept its population intact. Karahocagil says the migration affected Suruç, another plain in Şanlıurfa, and a similar irrigation project in the works will likely reverse the trend.

Indeed, an irrigation tunnel like those empowering agriculture in Harran appears to have reversed migration there. Scarce water resources and high unemployment had triggered migration to other cities about three decades ago from Suruç Plain. Suruç Tunnel, Turkey's largest, helped attract farmers back to the region after it was opened five years ago. Some 562,950 acres of land can now access the irrigation network, and it has contributed to agricultural employment for thousands of people in a short time. Murat Yahlizade, head of Suruç's agriculture authority, says locals are now able to grow highly profitable crops, and they have seen more people returning to Suruç in recent years.

"People who left their fields to work in cities gradually come back. Some farmers came to grow crops only temporarily but then decided to stay permanently. There is a considerable rise in village populations," he said. "For instance, there was only 25,000 square meters used for cotton production in 2008, and it rose to 237,242 square meters last year. People with smaller pieces of land also benefit, growing vegetables. We have seen a return to the glory days of Suruç Plain," he pointed out.

Mahmut Caymaz from Bilge village is among the returnees. He came back from central Şanlıurfa after the start of the irrigation. He now grows cotton in his field and recounts the day when they depended on little rainfall, if any, to grow crops. "We used to sow wheat in the past, and it was the privilege of only those with water wells to grow different crops," he said.

The GAP was initiated two decades ago to revive the dormant potential in the southeast, a region with stunted economic growth in the past.