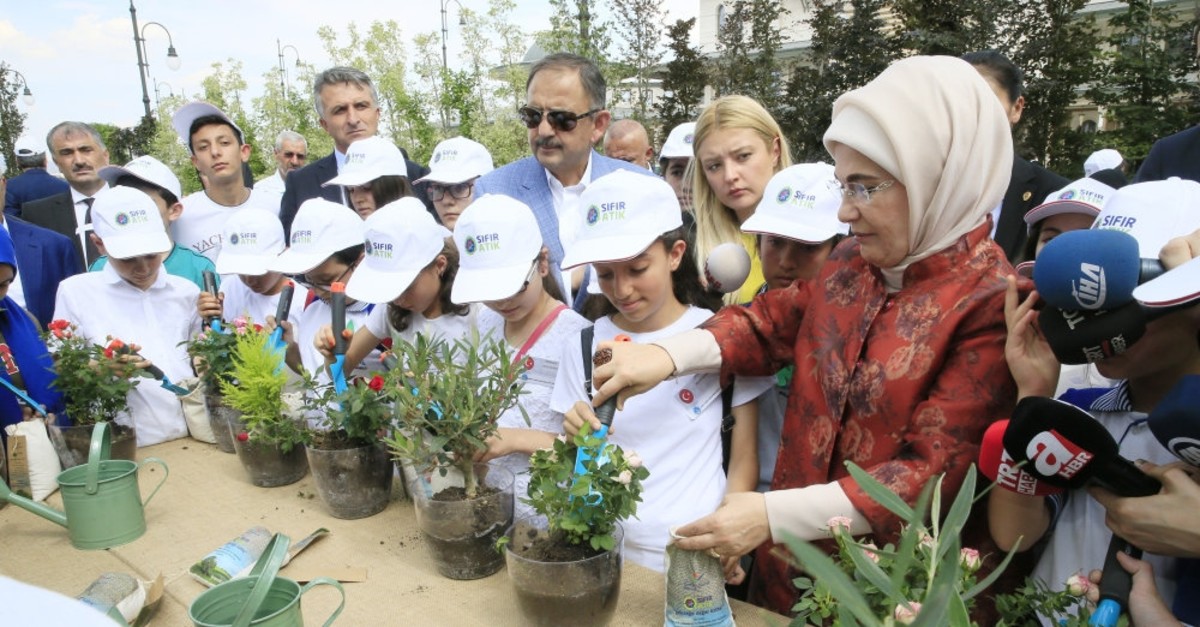 First lady Emine Erdou011fan plants flowers using compost made of recycled waste at an event at the Presidential Complex, June 2018.
by Tülay Canbolat Jul 30, 2019 12:15 am

Turkey's ambitious zero waste project, which aims to drive recycling efforts for every kind of waste, is being extended to food waste and unused, old textile products

The Zero Waste Campaign initiated by first lady Emine Erdoğan in 2017 and embraced nationwide in two years, will now cover recycling food waste and textile products. The Ministry of Environment and Urbanization, which oversees the massive recycling campaign, will also focus on the recycling of food and unused, old or faulty textile products. The project, which was first applied in the Beştepe Presidential Complex as well as ministries, later spread to municipalities all across Turkey and started taking hold in private companies and public buildings, from hospitals to schools. The next stage in the award-winning campaign will be run by the Turkish Red Crescent, the country's leading charity, which will oversee efforts for food and textile recycling. Red Crescent President Kerem Kınık said he discussed the issue with the first lady and they would cooperate with relevant authorities for a nationwide campaign.

"We are preparing a report for necessary regulations for transforming the country for food and textile recycling. In the end, tons of food and clothes which go to waste will return as a benefit to the Turkish economy," he said.

It will involve a partnership between public and private companies to establish a waste collection system for collecting excess food and textile products.

"We have cooperation with large grocery store chains and food retailers. Food waste will first be analyzed for their suitability for consumption and public health. We will then transfer them to our soup kitchens and large industrial kitchens for preparation for consumption. They will be canned and delivered to the needy. We are also working on setting up separate facilities which will solely focus on food recycling. They will be tasked with conversion of food waste for end consumers, its cooking and keeping them fresh," Kınık said.

The charity already launched pilot projects in İzmir and Ankara for recycling food waste. It collects food before it is dumped into dumpsters. The Red Crescent will launch a nationwide campaign next year. Officials say food worth TL 250 billion is wasted every year. Some 500,000 tons of bread, a staple of Turkish diet, also go to waste every year.

More than 2,500 tons of clothes and fabric and similar leftovers from textile production go to waste daily too. Kınık says that the Red Crescent will collect excess clothes people do not wear and often throw away.

"Clothes fit for wearing will be handed to people in need and those in bad condition will be recycled as fabric. We work on setting up infrastructure for this process. Facilities will be set up to obtain cotton, wool and other materials from dumped clothes," he said.

Kınık added that recycling would not be limited to textiles and they are considering adding furniture, carpets and home appliances to the recycling chain.

Turkey, late to the recycling trend and efficient waste management except in big cities, strives to end landfills whose numbers have considerably decreased in recent years. Turkey has started to prioritize waste management, over concerns of rising environmental damage, with municipalities responsible for garbage collection upgrading their waste management systems. The country also managed to recycle more than half of the plastic bottles in the market in 2017. Turkey also seeks to spread compost-making equipment used in businesses for converting food waste to compost for home use.

The country, which lags behind European Union countries in terms of recycling, aims to increase recycling rate to 35% in the next five years.

Currently, more than 18,750 public institutions are included in the zero waste project, separating their waste at its source. Figures supplied by Anadolu Agency (AA) show that since its launch, the zero waste project helped recycle 126.1 tons of paper and cardboard, prevented the cutting of 2,142 trees, while 49 tons of plastic waste were recycled, saving 798.7 barrels of petroleum.

A total of 25.5 tons of raw materials were saved by recycling 8.7 tons of glass waste and 11.5 tons of metal waste, while 3.7 tons of compost were produced from 9.1 tons of organic waste and used for growing vegetables and fruits.