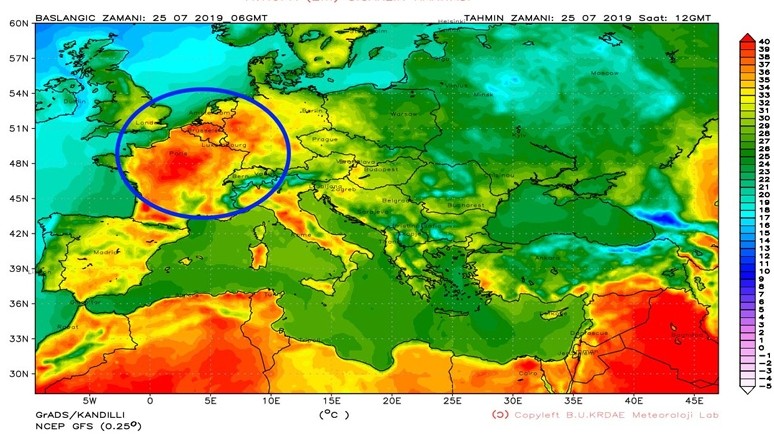 A cool front coming from the north could bring heavy rains to Turkey's Black Sea and Marmara regions this August, also triggering an onslaught of supercell thunderstorms, hail storms and tornadoes, a Turkish expert has warned.

Adil Tek, head of the Meteorology Laboratory at Istanbul's Kandilli Observatory, says they predict the arrival of a cold spell from the north to grip the region this month. It will also affect the Black Sea region, which is accustomed to precipitation and is trying to recover from a string of heavy rainfalls which caused disasters in its eastern and western parts. Tek says they project severe rainfall, the formation of supercells, an onslaught of hail and tornadoes in both regions.

Commenting on recent abnormal and chaotic weather events in both Turkey and Europe, Tek said that the recent heatwave and skyrocketing temperatures in Europe was unusual as the continent does not encounter such weather events very often.

However, he pointed out that especially the western parts of Europe, namely Portugal, Spain, Italy, England, France and Germany, have become a part of an extended weather system, which was the reason for the Europe-wide heatwave. Tek said Luxembourg, the Netherlands and Belgium were also influenced by this system, and the heatwave creeping up from Africa, in particular, had affected these places.

"But while the warm weather continued in Europe, it was relatively cooler in Turkey," Tek said.

Stating that this was a balance of opposites, Tek said: "If Europe is too hot, we have cooler weather; and Europe gets cooler when the hot weather comes to our country. It's a meteorological structure. Especially low pressure and high pressure areas determine this balance. It shows us where the wave of hot air will be transferred to. This (recent) heatwave started losing its effect last week. We can now sort of say that the weather in Europe has returned to its seasonal norms." 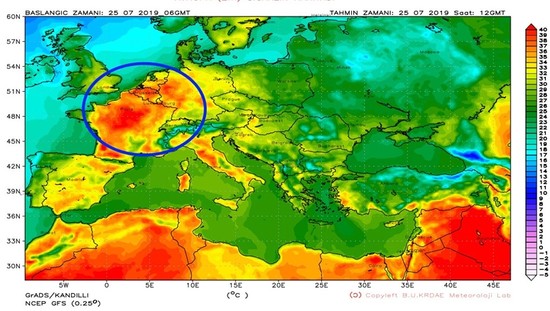 He added that as of next week, the heatwave will show its true face in Turkey.

Tek warned of a new heatwave, stating that in the notoriously arid and torrid climate in Turkey's southeast, the mercury will hit 45 degrees Celsius, while the Mediterranean and Aegean regions will see temperatures above 40 degrees. He said that in the following days, although not every day, temperatures will be as high as 40 degrees in the west of Marmara, and especially in Edirne and Tekirdağ. Istanbul, Ankara and Izmir, as the three biggest cities in Turkey, will also get their share of this heatwave, Tek said.

"We will observe a 3-4 degree increase in temperature, and this warm weather will last about 10 days. Humidity levels will also increase along with rising temperatures. The heat will feel sweltering in coastal regions, as well as in Istanbul where the real feel will be 37-38 degrees."

"This will especially be true for areas where there are no northern winds, or in more enclosed areas, like alleyways. In buildings that are not insulated, walls will emit the hot air into the house at night, which will further exacerbate this sweltering feeling."

"A new weather system will be arriving from Basra, Iraq in August. Humidity levels in Istanbul and coastal areas, especially in the Black Sea region, will rapidly rise due to this (movement)," he stressed.

Reiterating that in the old days August was called "a rotten month" because of high humidity, Tek said those who want to home-dry fruits and vegetables should wait for September-October when the 'Basra effect' from around the Persian Gulf is reduced.

Stating that temperatures in the months of June and July have been below seasonal normals, Tek said: "In July, especially in the last week, there was a wave of cold air coming from the north. This cool wave coupled with high sea water temperatures and humidity brought heavy rainfall. The floods in Trabzon's Araklı, the floods in Düzce were due to this. Although it seems hot this week in August, according to the results from climate models, we will see temperatures below seasonal normals in the Marmara, North Aegean and Black Sea regions this month. This again increases the possibility of a flood disaster, as well as severe rainfall."

Reiterating that sea temperatures will be key in determining whether the precipitation will hit., Tek said the waters of the Mediterranean Sea were currently at 28-29 degrees, while the Black Sea fluctuated between 23 and 25 ​​degrees, all which are quite warm.

"So when an air parcel that is below these temperatures comes along, this can ​​create strong rains, storms, and super cell-style weather events (supercell storms are thunderstorms that rotate and commonly produce tornadoes)," he said.