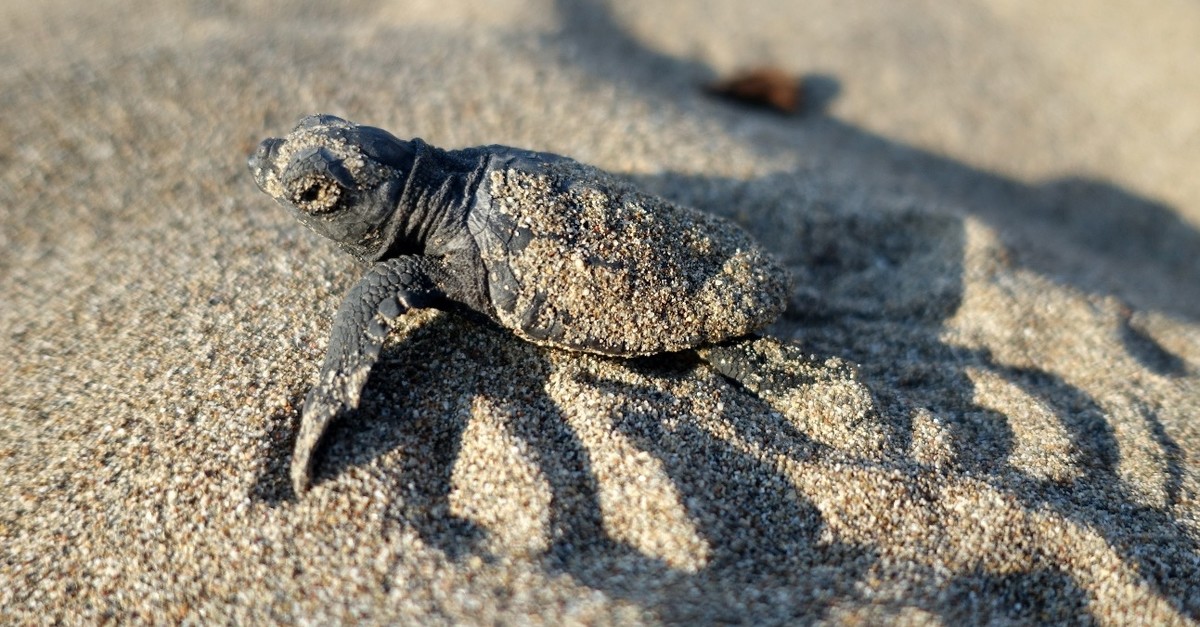 Some 70,000 sea turtles in the southern town of Belek, one of the largest hatching areas for the endangered animals, are making their way to the sea, a perilous journey only a few among every thousand make it through alive

Belek, a town in the Mediterranean province of Antalya, is home to one of the largest hatching areas for loggerhead turtles in Europe. The town's beaches are nowadays swarmed with activists working to ensure a safe "migration" to sea for the baby turtles. Some 70,000 turtles from 1,700 hatching spots along the pristine beaches of Belek are expected to make it to the sea this year.

Some 150 volunteers recently descended on the beach for a round-the-clock watch of the breeding grounds to keep the turtles safe from outside danger, such as uncaring humans spoiling the breeding areas. They are part of a monitoring project run by Ali Fuat Canbolat, chairman of the Ecological Studies Association at Hacettepe University.

Volunteers make sure the breeding grounds on the beaches of Belek and Boğazkent are untouched and record the moments the animals emerge from their sandy dwellings and eventually head toward the Mediterranean. Eggs left by adult turtles starting in May hatch between July and September. However, Canbolat says the hatching took longer this year. He ties it to a prolonged spell of cold weather in the region.

"Normally, they'd hatch as of July 10 but it began on July 25 this year. More will hatch by the end of September, and we expect some 70,000 baby turtles to head to the sea," he told Anadolu Agency (AA).

This is literally a journey of a lifetime for sea turtles as few can make it alive to the sea due to biological factors and routes blocked by busy human activity, from sunbathers on lounge chairs to off-road vehicles driving over their breeding grounds. Only one or two in every 1,000 baby turtles eventually survive, Canbolat says. Nevertheless, even this low number is sufficient to prevent their extinction, he adds.

Loggerhead sea turtles, known by the scientific name Caretta caretta, are among the species on the International Union for Conservation of Nature (IUCN) Red List of threatened species.

Antalya, renowned for its Mediterranean beaches and seaside resorts, is one of the most important nesting grounds for the loggerhead sea turtles in the region and in the world. Of the 22 beach nesting grounds for loggerhead turtles in Turkey, nine are located in Antalya province, according to the Directorate of Nature Conservation and National Parks. Some of these beaches also serve as nesting areas for the endangered green sea turtle.

The number of nesting spots and baby sea turtles decreased slightly this year compared to last year, Canbolat says but he dismissed it, saying it was not something significant. "We should be concerned if this repeats in following years," he said.

Canbolat and his team of volunteers set up "a tent city" on the beaches to protect the turtles. Together with other groups, they have helped lift the number of breeding grounds in the region to about 2,000, from only 400 in 1998. "We worked hard to ensure this. We spent many sleepless nights. We have volunteers here who stay in tents from May to September, while their friends enjoy their vacation here in Antalya. They work for the well-being of the Caretta caretta and thus are immersed in a bigger experience than they can have on a regular holiday," he said.

He called on fellow human beings to be "respectful" of sea turtle breeding grounds. "People should not drive vehicles over those places. I expect locals to be more conscious," he said. "It is not only the job of volunteers or academics. It is a duty for everyone to preserve nature," he points out.