A global aid campaign from Turkish charities in Qurban Bayram 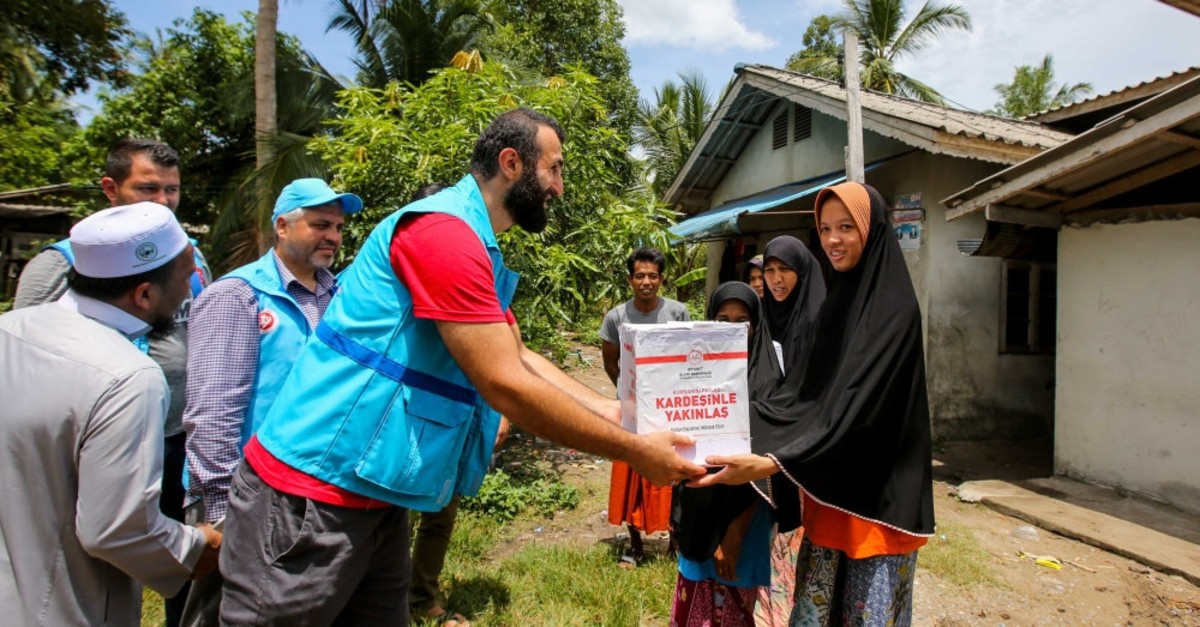 The Muslim world marks Qurban Bayram (Eid al-Adha), a holiday focusing on giving to the needy and Turkish charities are reaching out to people on six continents with a large humanitarian aid campaign

Dispatching teams all around the world, nonprofit organizations in Turkey embrace the spirit of the Qurban Bayram (Eid al-Adha), an important Muslim holiday. Charities deliver humanitarian aid on six continents, in about 100 countries, on the occasion after mobilizing donors for extra donations.

In Qurban Bayram, the faithful who can afford to are highly recommended to slaughter animals for sacrifice, from sheep and cows to camels and distribute the meat to those who in need.

For this year's bayram, which started at the weekend, charities focused their efforts of humanitarian aid to places where people are challenged with hunger, natural disasters, conflicts and poverty, as well as to migrants and refugees who had to leave their homes due to war and poverty.

Charity efforts reflect Turkey's increasing role in global humanitarian aid. It was the most charitable nation in 2017 with nearly $8.1 billion spent in humanitarian aid, equal to about 30% of all international humanitarian aid that year. Although it is struggling for economic growth while trying to join the league of developed countries after recovering from years of economic mismanagement, Turkey is determined to earmark more for humanitarian aid. Under the Justice and Development Party (AK Party) governments, humanitarian assistance efforts gained momentum, and the country's aid agencies rose to prominence for aid in disasters and assistance to refugees. The country's efforts allowed it to host the World Humanitarian Summit, a first-of-its-kind summit by the United Nations to coordinate humanitarian efforts.

This year, millions are benefiting from the aid by Turkish nonprofit organizations, which collect money for sacrificial animals from donors. Animals purchased by donors' money are then slaughtered in Turkey and other countries with Islamic rituals and fresh meat is subsequently delivered to families in need, from Africa to Asia. The Humanitarian Aid Foundation (İHH) is behind a campaign entitled "Have Your Share in Goodness" which allows donors to donate at least TL 850 for sacrificial animals. The charity distributes the meat in 90 countries, from Colombia to Kazakhstan, from Palestine to Rwanda. Diversity Association asks for a minimum donation of TL 560 for their campaign that will take volunteers to 46 countries to reach out to the needy.

The Istanbul-based Aziz Mahmud Hüdayi Foundation reaches out to 40 countries for their Qurban Bayram campaign. Federations of Associations Valuing Humanity (İDDEF) aims to reach out to 2.5 million people in 33 countries in their aid campaign. Volunteers from Sadakataşı Association will operate in 30 countries, from Burkina Faso to Iraq for aid efforts. The Deniz Feneri Association based in Istanbul will be active in 30 countries.

The Yardımeli Association looks to stand out among other charities. The association which distributes aid in 30 countries, will combine efforts with a tree planting campaign. Under their campaign entitled, "Sacrifice for Brotherhood, Trees for Humanity," they ask an extra TL 25 from donors to plant a tree in their name in other countries.

The leading charity Turkish Red Crescent reaches out to 4,5 million people in 51 countries for their bayram campaign. Speaking to the Sabah newspaper, Red Crescent President Kerem Kınık said their teams comprised of 2,500 slaughter animals bought with donations all around the world, from Suriname to the Philippines. Red Crescent, one of the oldest charities in the country, counts celebrities and President Recep Tayyip Erdoğan among its donors for their bayram campaign.

Apart from distribution of fresh meat, Red Crescent preserves the meat for a year-long humanitarian campaign. Canned food will be sent to the needy families throughout the year. Kerem Kınık says along with the usual locations they carry out aid campaigns every year, they will be present in some countries for the first time this year for their bayram campaign. These include Cote D'Ivoire, Mozambique, Comoros, Indonesia, Cambodia and Libya.

The Turkish Diyanet Foundation (TDV), a charity associated with Turkey's Presidency of Religious Affairs (DİB), formed a volunteer group of 6,500 people for aid distribution in bayram. The TDV reached out to 17 million people last year and seeks to increase it to 20 million people.