Generosity goes a long way for charities in Qurban Bayram 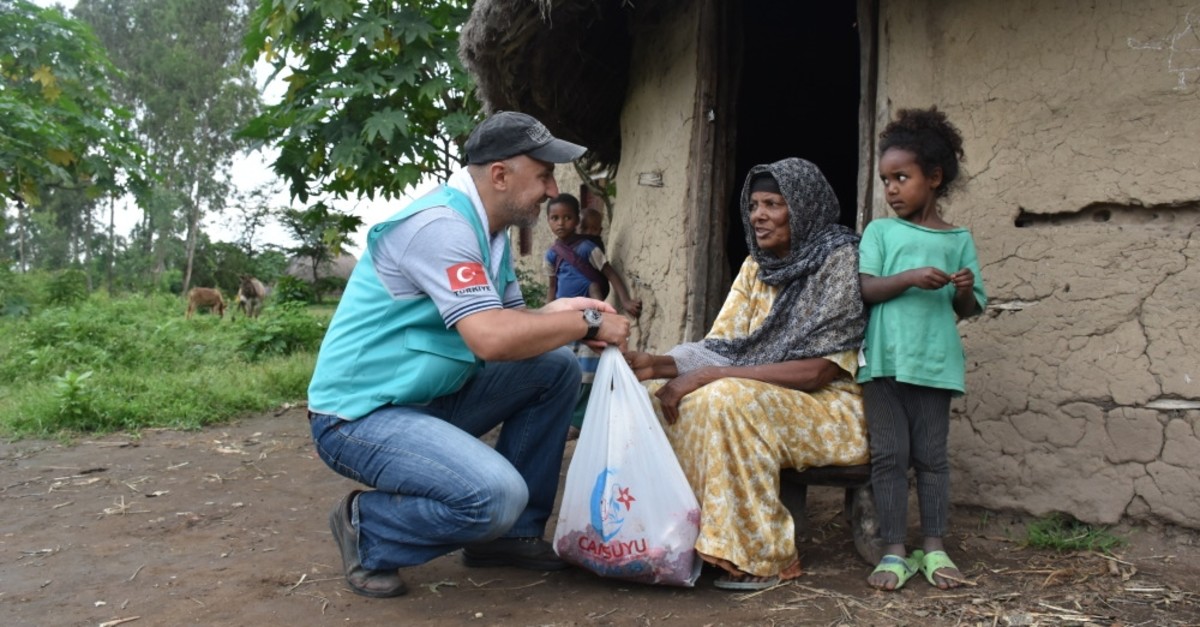 From Africa to Asia, Turkish charities delivered food aid to disadvantaged communities around the world on the occasion of the Islamic holiday of Qurban Bayram, a time for the faithful to reach out to the needy

Qurban Bayram (Eid al-Adha), a Muslim holiday where sacrificial animals are slaughtered and their meat delivered to the poor as food aid, gave an opportunity for Turkish charities to mobilize the nation to help disadvantaged communities around the world. For four days, charities supplied meat to millions of households across the world, from Latin American countries to Africa.

The Turkish Red Crescent was active in 51 countries where it delivered aid to some 4.5 million people. The leading charity which traces its roots to the 19th century, set up delivery points and places to slaughter animals donated by donors in 100 locations covering the Balkans, Asia, Americas, Middle East and Africa. The charity, known for its year-round efforts for victims of natural disasters, conflicts and other emergencies, expanded its outreach this year in bayram aid and delivered aid on the occasion for the first time in Cote D'Ivoire, Mozambique, Zimbabwe, Comoros, Rwanda, Indonesia, Philippines, Cambodia, Georgia, Tatarstan, Greece and Surinam.

The charity concentrated its efforts on places in dire need of humanitarian aid like Yemen, where the ongoing conflict displaced thousands and drove millions to hunger. In four provinces of the country, it delivered aid to about 9,000 households and those internally displaced due to the conflict. The Red Crescent has been active in Qurban Bayram aid in the past three years in Yemen. The conflict continues to cost the lives of civilians, with a mother and six newborns dying every two hours due to poor health care services, according to a report by the U.N. children's agency UNICEF. Yemenis have also suffered from acute malnutrition, starvation and cholera epidemics since Yemen's civil war began four years ago.

Turkish charities were also present all across Kyrgyzstan for bayram aid and delivered meat from more than 10,000 sacrificial animals. Fifteen charities, from Red Crescent to Cansuyu Association based in Istanbul, reached out to communities in need in several locations of the central Asian country, from a region where Turkic communities converted to Islam centuries ago to remote villages with large Muslim populations where Turkish volunteers slaughtered animals and delivered meat to families.

The Turkish Diyanet Foundation (TDV), a charity associated with Turkey's Presidency of Religious Affairs (DİB) was active in 149 countries where they delivered both meat and other humanitarian aid to the needy. Some 6,500 volunteers of the charity also handed out gifts to children in countries they visited, from candy to toys and clothes. The highlight of TDV aid was Bangsamoro where Muslims celebrate their first bayram as the Bangsamoro Autonomous Region in Muslim Mindanao (BARMM) of the Philippines for the first time. Some 12,000 people in the region which won autonomy after decades of struggle benefited from TDV aid.

The TDV also delivered aid in Tanzania, where 28,000 people in 21 regions benefited from the meat aid.

President Recep Tayyip Erdoğan was among the donors to the TDV this year and a sacrificial animal donated by Erdoğan was delivered to the needy in Togo where more than 14,000 people benefited from the aid.

The Istanbul-based Humanitarian Aid Foundation (İHH) delivered aid to more than 2 million in 93 countries. The charity officials said volunteers covered a distance of more than 333,000 kilometers in total to deliver aid around the world. Charity's aid focused on conflict-ridden zones, places where people are embattled with chronic hunger, refugee camps, orphanages, elderly citizens in need of aid and countries like Syria, Iraq, Palestine, Somalia, Yemen and Bangladesh. The İHH also delivered clothes to more than 27,000 orphans in 11 countries as part of their bayram charity work.

The aid was not limited to efforts of Turkey-based charities. Hasene, a nonprofit organization set up by Turkish expatriates in Germany, delivered meat aid to more than 20,000 displaced and impoverished people living in Lebanon, mainly those who fled the war in neighboring Syria. The Sadakataşı Association based in Istanbul also delivered aid in Lebanon to hundreds of Palestinian and Syrian refugees who took shelter there.