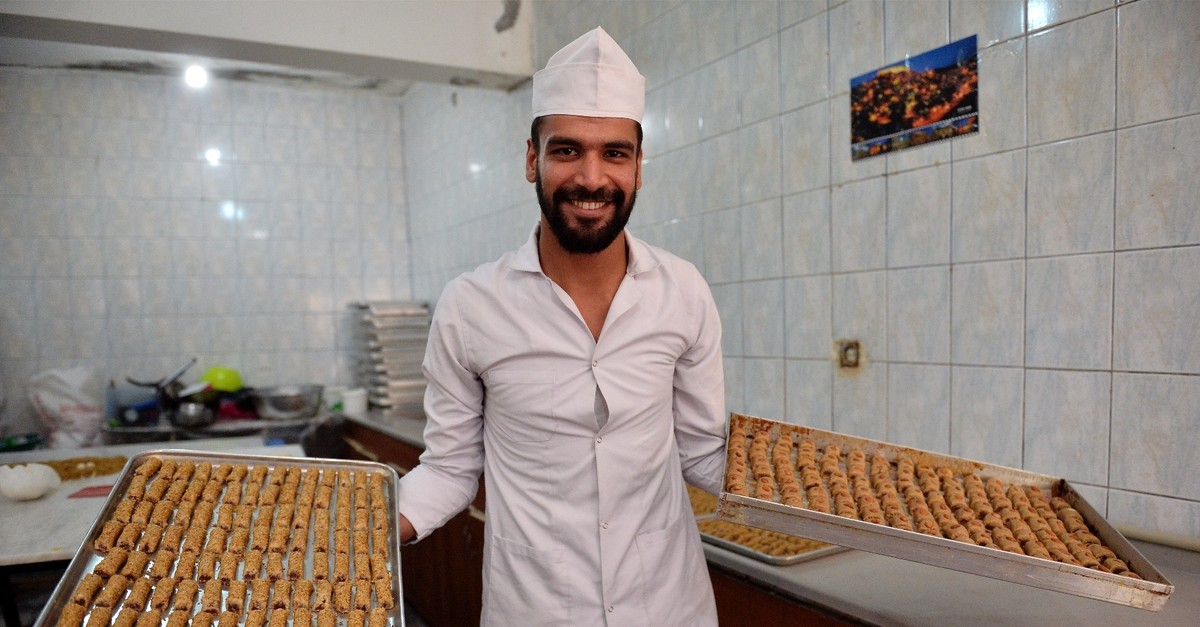 Fadil Al Azzavi displays the Su00fcryani u00c7u00f6reu011fi pastries, which has made him famous in the region for mixing the unique tastes of the region.
by Daily Sabah with AA Aug 26, 2019 12:11 am

A 28-year-old Syrian refugee makes Assyrian buns, also known as Süryani Çöreği in Mardin province, a place where he has built a new life after he escaped his war-torn country

Escaping his war-torn country, Fadil Al Azzavi, a 28-year-old Syrian took refuge in Turkey and now makes a living baking Assyrian buns with butter, Süryani çöreği, which is made with dates and 12 kinds of spices.

Al Azzavi first came to southeastern Şanlıurfa province from Deir el-Zour, Syria, about five years ago and later settled in southeastern Mardin province where he learned Turkish at the Turkish Red Crescent Community Center and started his education at Mardin Artuklu University Department of Business Administration. Trained while working in his father's patisserie in Syria, Al Azzavi opened his four-meter-square bakery shop in Mardin and started offering various delicacies specific to both Syria and Turkey. With success achieved in short time, he expanded his business and hired five more people, attracting local and foreign tourists with the sugar-free Assyrian buns. Al Azzavi, fluent in English, promotes the city in English posts on his social media and gives information about the ancient city to tourists.

While studying computer engineering in Syria, he learned how to make pastry in his father's business, and El Azzavi explained that Assyrian buns are very famous in Mardin, stressing that they have a different flavor by adding butter, dates and 12 kinds of spices used in Syrian buns. Home to many civilizations through history, Mardin has been home to a diverse mix of faiths that lived side by side, including Muslims and Christians.

He said that locals and tourists visiting Mardin love his pastries. "I have a lot of customers from outside the province. I receive orders from Istanbul, Bursa, Izmir, and Adana and send them by cargo," he added.

Al Azzavi pointed out that Mardin is an authentic, beautiful city and that he tries to promote the city to attract foreign tourists. "I promote the city on social media in English. Foreigners do not know much about this place. I also give information about the city to tourists coming here."

He stressed that he loved the Turkish Red Crescent Community Center and the people living there and that everyone was warm. "I love Turkey very much. There are people here who see us and weep for us. I have never seen refugees treated like this in other countries," he said. "I especially love the president. He was very helpful to us. He supports not just us but all the oppressed. I loved him before I even got here. We saw what he did for Palestine."

Following the eruption of the Syrian civil war in 2011, millions have sought refuge in Turkey. According to Interior Ministry figures, the number of refugees was 4.2 million in 2017 and has now reached 4.9 million. While 3.6 million Syrians live in Turkey, more than 415,000 Syrians have been born in Turkey since the start of the civil war in 2011. The government has made effective efforts to ensure integration of Syrians into society.

The successful entrepreneur said there are good and bad people in every society and that one's mistake should not be attributed to that society. "Not all Syrians are bad because a Syrian made a mistake. A Turkish friend gave me a ring with a Turkish flag on it. Since I love Turkey, I never take that ring off my finger."

Ayfer Güzel, who came to visit the city from Diyarbakır, pointed out that the Assyrian bun she ate for the first time was a perfect flavor. "It has a delightful and wonderful flavor. Everyone who comes here should taste it," Güzel added.

Sibel Akdoğan from Çanakkale said that she liked both the city and the local delicacies prepared by Al Azzavi.